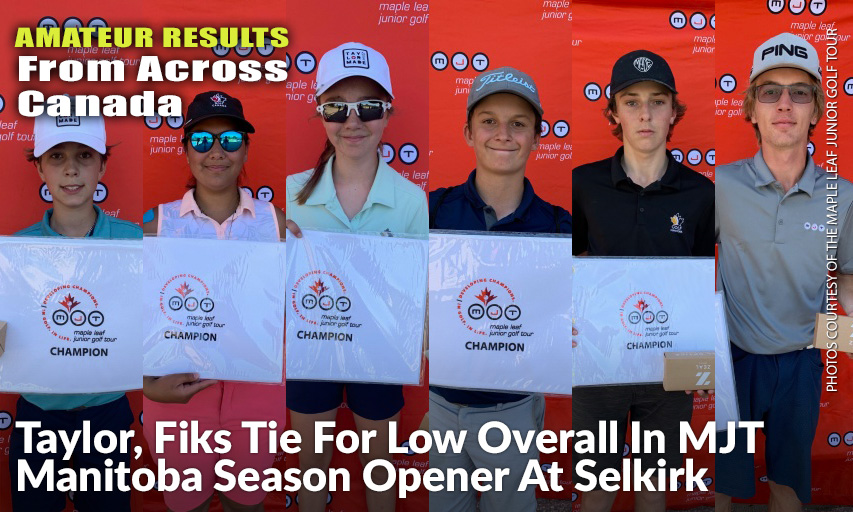 There was no shortage in talent displayed in the MJT Junior Boys Division at Selkirk that saw an exciting finish take place between three MJT veteran champions, all from Winnipeg, MB. Taking home the win with scores of 70 and 75 (145) was 2020 MJT Manitoba Order of Merit Winner Noah Fiks. The 17-year-old golfer edged out a two-shot victory holding off two great charges from behind to earn his fourth victory in his last six starts on the MJT, and tied for Low Overall Score with Jack Taylor in the MJT Juvenile Boys division. 2018 MJT National Champion, Braxton Kuntz, 17, fired scores of 74 and 73 (147) including going two-under par in his final five holes of the competition, to finish in second place. 2019 MJT National Champion Neel Soni, 18, finished the division in third place, carding 74 and 75 (149) after playing his final four holes at one-under par.

MJT Bantam Boys saw 14-year-old Jackson Delaurier, of Dauphin, MB, earn his first MJT Junior Tour title in his first start. Delaurier, who was previously the Golf Manitoba Bantam Boys Champion, recorded rounds of 77 and 75 (152) to win the MJT event by four shots. Payne Wood, 14, of Winnipeg, fired a pair of 78s (156) to finish runner-up by a single shot.

The MJT Peewee Boys Division needed a playoff to crown a winner after 36 holes of play. Winnipeg-players Mason Chubey (82-79), 12, and Hudson Hunnie (79-82), 12, finished tied at the top of the leaderboard with a total score of 161. After two playoff holes, Chubey was crowned the division title by countback, earning his first MJT Junior Tour win in his first career start on the MJT.

2020 MJT Manitoba Order of Merit winner, Mikyla Albert, continued her fine performance on the MJT earning her first 2021 title in her hometown of Selkirk. The 19-year-old veteran MJT champion shot 83 and 77 (160) for her 17th win in eight years on the MJT. Finishing tied for second place just one shot back were 15-year-old players Cala Korman, of Killarney, MB, and Crystal Zamzow, of Swan River, MB, who both carded identical scores of 86 and 75 (161).

Full results can be viewed here. The MJT Manitoba Junior Tour circuit next heads to St. Boniface Golf Club in Winnipeg on July 19 and 20. Registration is online at www.maplejt.com.