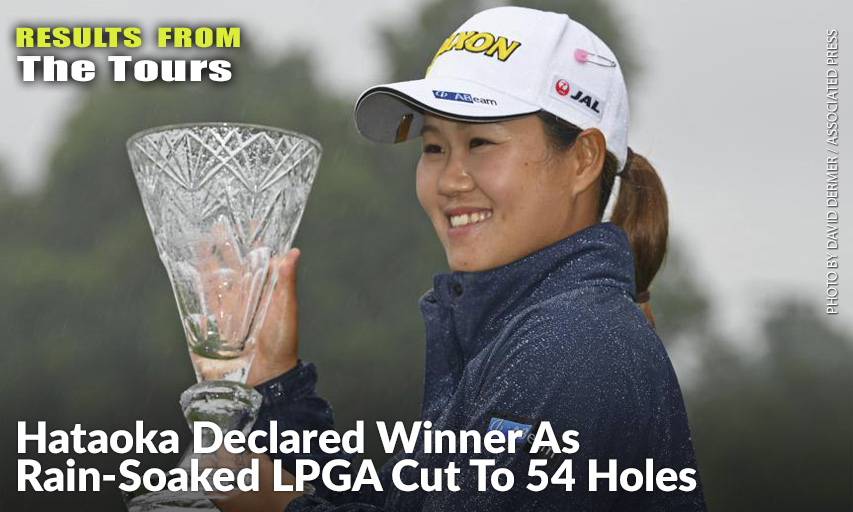 SYLVANIA, Ohio (AP) — Nasa Hataoka of Japan was declared the winner of the Marathon LPGA Classic when the final round was washed out by relentless, heavy rain.

Hataoka had a six-shot lead over Elizabeth Szokol and Mina Harigae. She won for the fourth time on the LPGA Tour, and her first LPGA title in two years.

The final round began at 7 a.m. with hopes of beating the rain. That lasted only a few hours before Highland Meadows was soaked, and soon became unplayable.

Donna Mummert, the LPGA's senior manager of rules and competition, said the greens were the first problem as the tournament tried to resume. By mid-afternoon, it was the fairways that were so soaked the LPGA had no choice but to end the tournament.

The LPGA said the forecast was not favorable for a Monday finish, and it didn't help that Evian Championship — the fourth LPGA major of the year — is scheduled to start on Wednesday.

Danielle Kang, the defending champion, birdied the third hole to pull within eight shots and wanted to see the LPGA acquire more resources to be able to handle weather.

“There is 18 holes of golf left out there,” Kang said. “I played three of them. I always look at golf tournaments as 72 holes, so when we don't get to finish 72 holes ... and it's not the LPGA's fault, it's not anybody's fault. Sometimes we don't have enough resources.”

She did not elaborate on what resources could have made a difference.

Hataoka lost in a playoff to Yuka Saso in the U.S. Women's Open last month. Her last LPGA Tour victory was the Kia Classic in 2019, though she won twice on the Japan LPGA later that year.