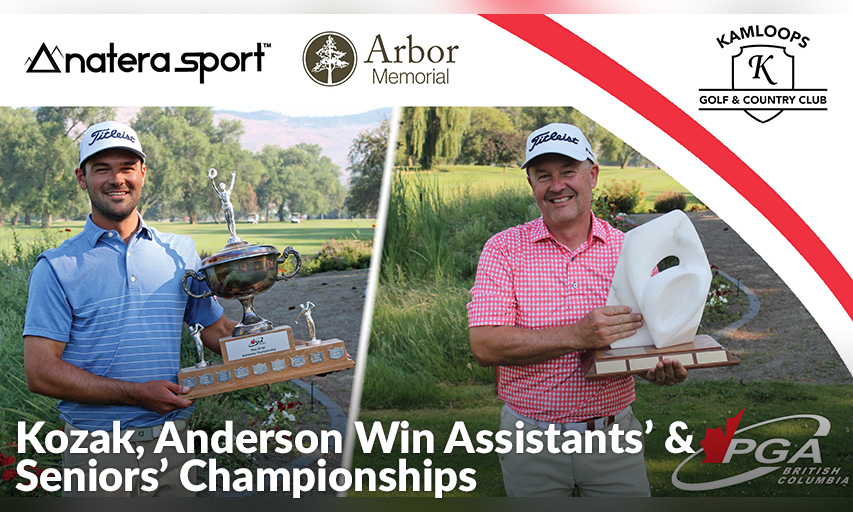 Kozak (The Okanagan Golf Club) matched the 67 he shot in the opening round to capture the Assistants’ Championship and the top prize of $3,000 at 10-under-par, finishing two strokes clear of Keith Martin (Tower Ranch Golf Club) and Zach Olson (Chilliwack Golf Club).

“It’s pretty crazy,” Kozak said of winning his first PGA of BC title. “I didn’t really think that this was an option coming into the week. I haven’t golfed a ton (this year) so I’m just as surprised as anyone else is. It’s awesome and it’s a great feeling.”

The final round was wide open for much of the day, with 10 players within two shots of the lead at one point early on the back nine. Starting on Kamloops Golf & Country Club’s 10th hole both days, Kozak had played his first 28 holes of the 36-hole championship without a bogey before suffering setbacks at his 11th and 13th holes Tuesday. He bounced back in a big way with birdies at the 14th and 15th before adding another on the par-5 18th.

“I knew there was going to be a point where there might be a little bit of adversity,” said Kozak. “At that point, you’ve just gotta keep on doing what you’ve been doing and get after it as best you can. I was really happy with the way I responded after a couple of bogeys on the back nine and closed out really, really well.”

The final round was only Kozak’s eighth time playing golf in any setting in 2021, as the 28-year-old’s schedule is mostly consumed with teaching juniors at The Okanagan Golf Club – efforts that earned him the PGA of BC’s Jack McLaughlin Junior Golf Leader of the Year Award in 2019.

“I’d been playing well in the rounds that I had played, which was nice,” said Kozak, whose previous best finish in a PGA of BC event was a T3 in the 2018 Assistants’ Championship at Bear Mountain Golf Resort. “My goal was just to give myself as many opportunities as I could and keep it really simple, which I think I did a good job of.”

Martin, the reigning PGA of BC champion, also posted a final-round 67 despite hitting only eight greens in regulation to move up into a share of the runner-up spot.

“Mentally, today was probably one of the best rounds I’ve ever played, because I had nothing in my warm-up this morning and my swing was so off,” said Martin. “I one-putted everything and that was really good, but my ball-striking was not good today and I had to play so conservative just to keep it in play.”

Martin will return to Kamloops next month to defend his PGA of BC Championship title at Rivershore Golf Links. He and Olson each took home $1,500 for second place.

“It’s definitely encouraging to be keeping up the consistency,” said the 25-year-old. “It would be nice to break through … one of these days but my game’s felt pretty solid and that’s been a lot of fun.”

Jake Scarrow (Chilliwack Golf Club) closed with a 69 to finish alone in fourth place at 7-under, earning $1,000. John Shin (Northview Golf & Country Club) and Nate Ollis (Cordova Bay Golf Course) both carded the low final rounds, each posting 66 to finish tied for fifth at 6-under.

First-round leader Christine Wong (University Golf Club) trailed by just two strokes heading into the final hole but found the penalty area left of the green trying to make up the deficit, ending her bid to become the first woman to win a co-ed, individual stroke-play championship conducted by the PGA of BC. She finished tied for seventh at 5-under with Kevin Stinson (Cheam Mountain Golf Course), Brady Stead (Ledgeview Golf Club) and Ethan Danish (Gallagher’s Canyon Golf Club). Each player earned $575.

CLICK HERE for final scoring for both the Assistants' & Seniors' Championships.

Anderson’s final-round 67 was the low round of the Seniors’ Championship as he made four birdies over his last six holes to secure a five-stroke victory. Playing the event for PGA of BC Professionals aged 50 and older for the first time, Anderson took home $1,400 and will have his name etched on the Ben Colk Trophy.

“It feels very good to finally post a good round. I haven’t played a lot of great golf so far this year, so it was nerve-wracking and fun to be out here,” said Kelowna Golf & Country Club’s Head Professional.

Anderson, 53, entered the day two shots off the lead but had been left a bit frustrated by his opening-round 71.

“A little bit more patience,” Anderson said of what allowed him to feel a bit more comfortable on the course [in the final round]. “I watched Jeff Buder sink some very nice putts yesterday and just the flow of his long putter was good inspiration for me. I found the speed (of the greens) a little bit easier today.”

With victories in three other PGA of BC championship events in his career and a usual contender in any competition he enters, Anderson was pegged by many as the pre-tournament favourite with good reason. He now joins Doug Morgan (Richmond Country Club) and former PGA of BC Professional Phil Jonas as the only players to have won four or more of the Association’s active championships.

“I didn’t count myself as the front-runner, I just knew that if I did what I’m capable of, I’d have a chance,” said Anderson. “Even though it’s really more about the camaraderie and having fun out here, there are still some great shots and good players that can turn up at any time.”

Peter Kenneford (Creston Golf Club) was the only other player to finish under par, closing with a 68 to reach 1-under for the event and collect a cheque for $1,000.

“Putting really helped today and my ball-striking was really good,” said Kenneford. “I had a couple of mistakes out there that kept me from putting a bit more pressure on Rob, but overall it was a great day.”

Two-time champion Norm Jarvis (Delta Golf Centre) placed eighth but also earned Super Senior honours as the low Professional aged 60-plus, which was worth a $150 bonus.

The immaculate conditions at Kamloops Golf & Country Club were the talk of the tournament, with players raving about the quality of the greens over both days. The PGA of BC thanks host Professional Alec Hubert and the entire team of staff and volunteers at the club for their outstanding hospitality.

Further thanks go to presenting sponsors Natera Sport for its continued support of these championships, as well as Arbor Memorial for its on-site presence and a prize draw for competitors.

About Arbor Memorial Inc.
Arbor Memorial is a trusted family-owned Canadian company with deep roots in diverse communities across the country. Established in 1947, Arbor has more than 130 locations, and 24 of our cemeteries have full-service funeral homes on premises, offering complete service to our families. With more than 2,500 dedicated and highly-trained staff, Arbor has solidified itself as a standard-bearer in the industry, with a long history of excellence and strategic growth. It is our privilege to provide expert guidance and customized services that help families honour, respect and celebrate loved ones. Click here to visit Arbor Memorial online and learn more about its available services and locations.