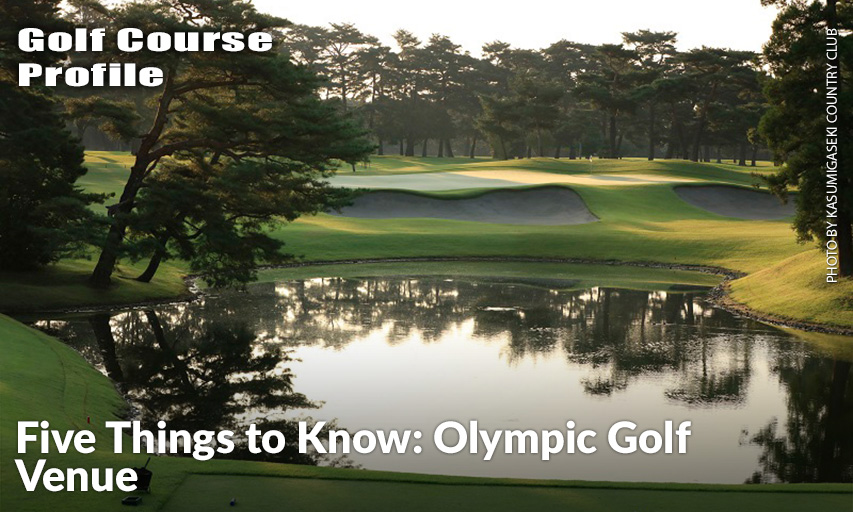 When golf returned to the Olympics five years ago, a new course was designed specifically for the competition. This time, the Games will visit a historic venue that is nearly a century old. Kasumigaseki Country Club is one of the oldest clubs in Japan and was the site of the stunning upset that sparked the country’s passion for the game. Kasumigaseki also played a crucial role in Hideki Matsuyama’s career, setting him on the path that led to this year’s Masters title.

Before the Games, here are Five Things to Know about Kasumigaseki Country Club and its East Course, which will host 60 players from around the globe in both the men’s and women’s competitions.

1. HIDEKI’S HISTORY: Green and gold. They complement each other well. Matsuyama already owns a Green Jacket after winning this year’s Masters. He’s the first Japanese man to win one of golf’s major championships. It was an accomplishment that earned him the Prime Minister’s Award upon his triumphant return to his homeland in April. There will be no spectators at the Olympic competition but it’s still safe to say that the host country’s eyes will be focused on Matusyama’s medal quest.

While most of the field has never seen Kasumigaseki, Matsyuama has already won two important titles there: the 2009 Japan Junior and 2010 Asia-Pacific Amateur.

Kasumigaseki has hosted the Japan Junior for the last 50 years, which earns it a comparison with another of the country’s most vaunted venues. Kasumigaseki refers to itself as the Koshien of Japanese golf. Koshien, which ESPN’s Jeff Passan called “the country’s most sacred sporting grounds,” is the site of Japan’s annual high-school baseball championship. Japanese players like Shohei Otani, Masahiro Tanaka, Hideki Matsui and Daisuke Matsuzaka became national heroes at Koshien before embarking for Major League Baseball.

“For nearly a century, Koshien has hosted twice-annual championships that marry the interest of the NFL, the urgency of the NCAA basketball tournament and the parochialism of the World Cup,” Passan wrote in his book, “The Arm.”

Matsuyama only earned an invitation to the Asia-Pacific Amateur because Japan, as the host country, received extra spots in the field. That good fortune changed the course of his career.

Matsuyama went on to win by five shots, earning an invitation to the 2011 Masters.

He was low amateur at that Masters, thanks in large part to a third-round 68 that he recently called “a round I’ll never forget.” Steve Stricker, then the world’s eighth-ranked player, congratulated Matsuyama as he walked off the 18th green.

“That round gave me the confidence that I could play here,” Matsuyama said at this year’s Masters, “I could play professional golf as a career.”

2. CUP RUNNETH OVER: Serving as a springboard for Matsuyama’s success was not the first time Kasumigaseki contributed to golf’s popularity in Japan.

The East Course also served as the venue for the 1957 Canada Cup, which became the World Cup. Thirty two-man teams arrived at Kasumigaseki for the first major international golf tournament played in Asia. Sports Illustrated’s Herbert Warren Wind upped the ante, calling it “the most important international sports event ever held in the Far East.”

In preparation, Kasumigaseki’s greens were covered in bales of straw each night for weeks leading into the event. The straw, which was removed each morning, was believed to protect the grass. Those greens gave the home team an advantage that helped it dominate a field littered with future World Golf Hall of Famers.

“The biggest enemy is going to be (the) swank and tricky Kasumigaseki Course, a nightmare of traps and greens of coarse Korai grass,” a newspaper report read.

“The grain of the grass grows hectically in every direction, like the extra rough beard featured in shaving cream commercials,” Wind wrote in Sports Illustrated.

Despite its unfamiliarity with the putting surfaces, the U.S. team was still a formidable duo. The U.S. had won the previous year’s Canada Cup and the 1957 lineup featured Sam Snead and Jimmy Demaret, who’d combined for 10 major titles.

The Japanese team of Torakichi Nakamura, 41, and Koichi Ono, 39, separated themselves on the putting surfaces, though.

Despite trailing the U.S. by five shots after the first day, Japan charged to a nine-shot victory in front of a partisan gallery of approximately 12,000 fans. Japan finished at 19-under 557. Snead and Demaret finished second in the team competition.

Wind wrote this about the unique swings of the winning duo, both of whom were former caddies: “Over the four days, their play from tee to green was steady rather than exceptional. Neither is a stylist, or close to it. On his backswing, Nakamura lurches his whole body way around to the right, thrusting his hands into the air as if to grab the rope of a bell in a belfry. Ono has a very flat backswing on which he loosely flips the club open and shut with his wrists. … Their driving, while short, was at least as straight and serviceable as any of their rivals’. Their iron play was far from brilliant but it was good.”

Player said about the victorious team, “I’ve never seen such putting in my life.”

A recent slump had some questioning Ono’s selection to the team, but “the slim, dour chap,” as Wind described him, finished fifth in the individual competition.

The entire tournament was televised in Japan and covered widely in newspapers. The exposure, and the home team’s upset, is credited with starting Japan’s golf boom.

3. A HISTORIC CLUB: Kasumigaseki was founded in 1929 with the opening of the East Course, which was designed by five members including Kinya Fujita, who’d taken up the game while studying at Columbia University and working in New York. The East Course was renovated two years later by famed British architect C.H. Alison. Kasumigaseki’s West Course was built in 1932, making it the country’s first 36-hole club.

After the East Course’s greens were severely damaged by snow, two greens were built on each of Kasumigaseki’s 36 holes. One green featured Korai grass for warm weather and bent grass for cold weather.

Eight years later, however, the Japanese government ordered its citizens to refrain from playing golf because of World War II. Part of the West Course was requisitioned by the Japanese military and several holes were sold for farmland to raise necessary funds to run the club during the war. The club closed in 1945, and later that year was requisitioned by the U.S. Air Force.

The use of 18 holes didn’t occur again until 1946 after the recovery of nine holes from each course. The portion of the East Course that was sold as farmland was bought back in 1950. Two years later, the U.S. Air Force ended its requisition of the club after nearly seven years and the East Course regained its original 18 holes. A new West Course was opened in 1954, making Kasumigaseki a 36-hole club once again.

Visitors to the course have included Gene Sarazen, in 1937, as well as the Big Three of Arnold Palmer, Jack Nicklaus and Player. The trio filmed one of its televised matches at Kasumigaseki in 1967. The East Course was selected as Golf Magazine’s top 50 courses in the world in 1979.

Tom Fazio and his son, Logan, were tabbed in 2014 to renovate the East Course, building one green for each hole and making it a modern test.

4. ALISON’S IMPACT: Alison, who renovated Kasumigaseki’s original East course, is often overlooked by his longtime architecture partner, Harry Colt, who is one of the most influential architects of all-time and credited with turning golf course architecture into a profession. Colt influenced many of the Golden Age’s top architects, including Alison, Alister Mackenzie and Donald Ross.

Colt and Alison teamed up in 1906. Thirteen years later, they teamed up with Mackenzie, who would later design Augusta National, to form the firm of Colt, Mackenzie & Alison in 1919.

Alison’s career took off after he moved to the United States, where he designed such courses as the Country Club of Detroit, Sea Island and consulted on Pine Valley.

Alison arrived in Japan on December, 1, 1930, on a ship from California.

Alison was only in Japan for a few months in 1930, but he designed and renovated several courses and his impact on golf in Japan is still felt. His trip to Japan is compared to Mackenzie’s trip to Australia, which resulted in the building of many of the country’s best courses, such as Royal Melbourne and Kingston Heath. Alison is considered the father of Japanese architecture because of the courses he had a hand in and his influence on Seiichi Inoue and Osamu Ueda, two of Japan’s top architects.

When Alison saw Kasumigaseki, he was impressed with its setting but said the course needed better greens and bunkers. Alison’s assistant, George Penlace, commenced the renovation work and Inoue served as site assistant, giving him first-hand experience executing Alison’s philosophy.

“(Alison’s) courses were often long and difficult; which, again, was a legacy of his experience at Pine Valley (where he had previously worked),” Cutten wrote.

5. UPDATING A CLASSIC: Kasumigaseki will measure approximately 7,500 yards for the Olympic competition.

Tom Fazio was tasked with modernizing Kasumigaseki and getting it ready for another international competition. His renovation, along with his son, Logan, gave the East Course a single green on each hole, lengthened the layout and removed or moved some trees. The new putting surface was often placed between the two existing greens, adjoining the putting surfaces to create a single green.

“We kept the holes in the same location, just tweaked them and adjusted the fairway bunkers for today’s distances,” Fazio told PGATOUR.COM. “We shaped the greens for modern standards. We kept the feel of the old course. We contoured the entire course from tee to green to give it a distinctive look and add a degree of framing and definition while keeping the holes in the same corridors.”

Instead of two grasses for different seasons, Kasumigaseki now has bentgrass greens and Zoysia on the rest of the course. The Olympics will be held during Japan’s hot and rainy summer, meaning course conditions will be soft.

Fazio said the course has the feel of a northeast Donald Ross. PGA TOUR agronomist Dennis Ingram, who has been on-site since May, said the trees give it a Monterey Peninsula feel. Ingram called the East Course a, “big, mainly wide open, in your face course of 7,600 yards with big, deep bunkers.”

This article was originally published on PGATOUR.com. <https://www.pgatour.com/news/2021/07/25/five-things-to-know-olympic-golf-venue-kasumigaseki-country-club-tokyo.html>