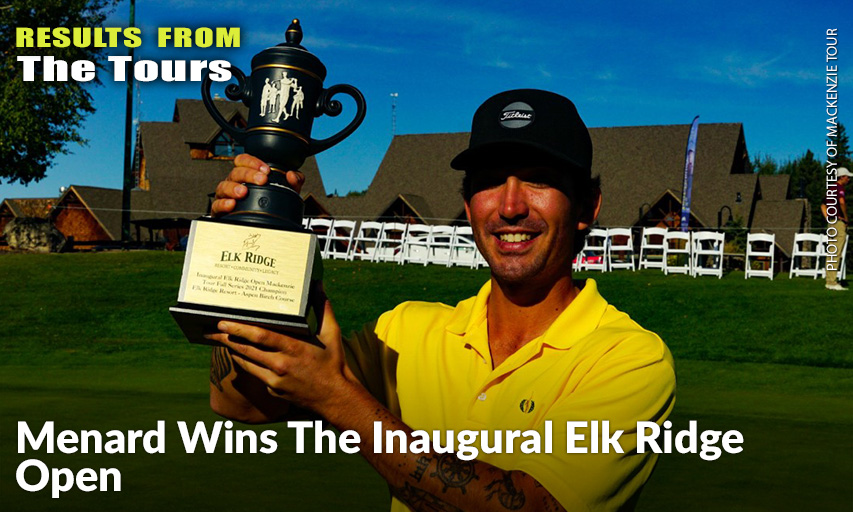 WASKESIU LAKE, Saskatchewan — Coming into the final round with a five-shot lead, Raoul Menard got off to a rough start, making bogeys on three of his first four holes. However, the Ange-Gardien, Quebec, native got things back on track, winning the Elk Ridge Open with a three-round total of 9-under, good for a four-shot victory over Toronto’s Sebastian Szirmak.

“I’m not going to lie, my mind was racing a little bit at that point,” said Menard on his slow start. “I just told myself to be patient and just keep doing my routine — my process — and it would fall into place, and it did.”

This marked Menard’s first start on the Mackenzie Tour – PGA TOUR Canada schedule this season, and the victory ranks as a career highlight for the 29-year-old.

“I’ve had some fun experiences in golf, and this is definitely one of them,” said Menard. “I’m just happy the way I handled it, and hopefully it’s just the beginning. I want to make it to the top level, that’s the goal, and this is why we’re here. It’s one step, and hopefully we take it further.”

Szirmak birdied four holes in the final round, including three over the first seven holes, cutting Menard’s lead to just two shots at that point, but he was unable to get any closer.

“I was like a shark,” quipped Szirmak. “I sensed a little blood in the water, and I was trying to put pressure on him. It was just a bit of a shame on the back nine. I had a lot of looks (for birdie), I just didn’t get some of those putts to fall.”

Selkirk, Manitoba’s Travis Fredborg tied for third, at 4-under, along with American Franklin Huang.

Kade Johnson of Yorkton, Saskatchewan, tied for fifth, at 3-under, after a second consecutive round of 68. He was happy to put in a solid performance in his home province.

“It’s awesome to play a professional event in Saskatchewan,” said Johnson. “I’ve never been able to do that before. It was cool coming up 18 and hearing everybody cheer me on, and I definitely now know the support I have in this province.”

The Mackenzie Tour – PGA TOUR Canada heads to Calgary next week for the ATB Financial Classic at Country Hills Golf Club, with the first round set to begin Thursday.

“I just started hitting some shots, started feeling my rhythm, and some putts went in.” –Raoul Menard on recovering from his slow start

“I couldn’t have asked for a better week. The people here—the volunteers and the staff—everything was great. It’s a great resort, and hopefully I’ll be back at some point.” –Raoul Menard on Elk Ridge Resort

“The turf was great. A couple of maintenance staff members asked us how the course was, and we were just giving them the best reviews, saying it was great. Thank you for putting in the time to have the course this ready for us.” –Sebastian Szirmak on Elk Ridge – Aspen/Birch

“To come back from that shaky start is really tough. It’s not easy to do on any level, so I’m proud of him, and really happy for him. I’m happy he’s only playing one more tournament on this Tour so we don’t have to see him again.” –Sebastian Szirmak on Raoul Menard

“It just shows the level of support that this province has for their own, and it’s cool now to be a part of that” –Kade Johnson on the support of the gallery