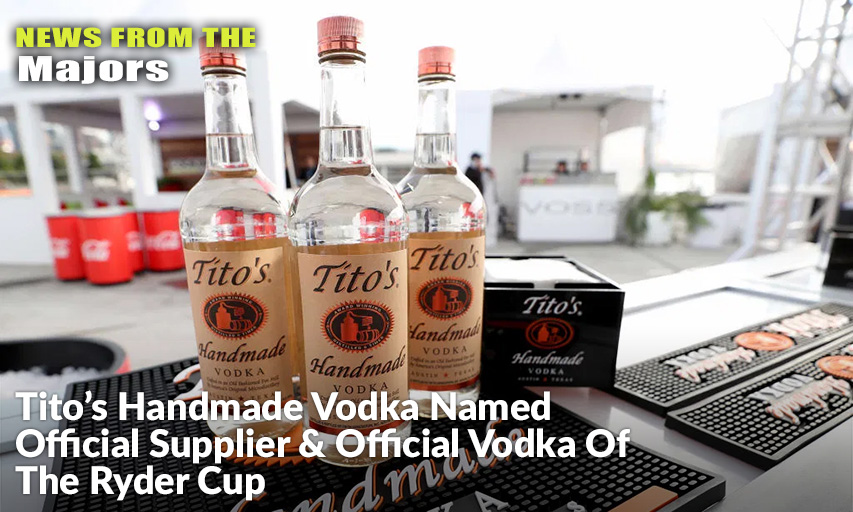 The PGA of America announced Tito’s Handmade Vodka as the Official Supplier and the Official Vodka of the Ryder Cup, which will be held September 21-26, 2021, at Whistling Straits in Kohler, Wisconsin.

Known as America’s Original Craft Vodka, Tito’s sold its first bottle in Austin, Texas in 1997. Since that first bottle, Tito’s has always remained true to its founding spirit, just like the Ryder Cup. The brand distills a world-class vodka housed in a simple bottle with a modest paper label and no eye-popping price tag. As a vodka that is so smooth you can drink it straight, Tito’s has always believed that it’s what’s inside the bottle that really matters.

“To pair the Ryder Cup with America’s finest vodka in Tito’s is a natural fit,” said PGA of America President Jim Richerson. “We’re incredibly excited to add a special brand like Tito’s to what should be a spectacular celebration of golf in September at Whistling Straits.”

To highlight the sponsorship, Tito’s will activate their Stillhouse Lounge within the Dye Plaza at Whistling Straits. This edition of the Tito’s Stillhouse Lounge will pair the spirit of the Ryder Cup with the renowned Tito’s Handmade Vodka brand experience.

“The Ryder Cup is one of the most unique and beloved competitions in the world. One where fans’ passion behind the ropes rivals that of the players on the green,” said Taylor Berry, VP of Brand Marketing at Tito’s Handmade Vodka. “As an American-made vodka, Tito’s is thrilled to be a part of the action this year, especially on our home turf. Once the teams are set, rivalries are put aside and match play begins, this year’s Ryder Cup will undoubtedly be a true original, just like a pour of the good stuff.”

Tito’s Handmade Vodka will be available to spectators and hospitality guests during the Ryder Cup, which will be contested domestically for the first time since Ryder Cup USA’s stirring victory at Hazeltine National Golf Club in Chaska, Minnesota in 2016. Tito’s will also have branding onsite wherever their cocktails will be served.