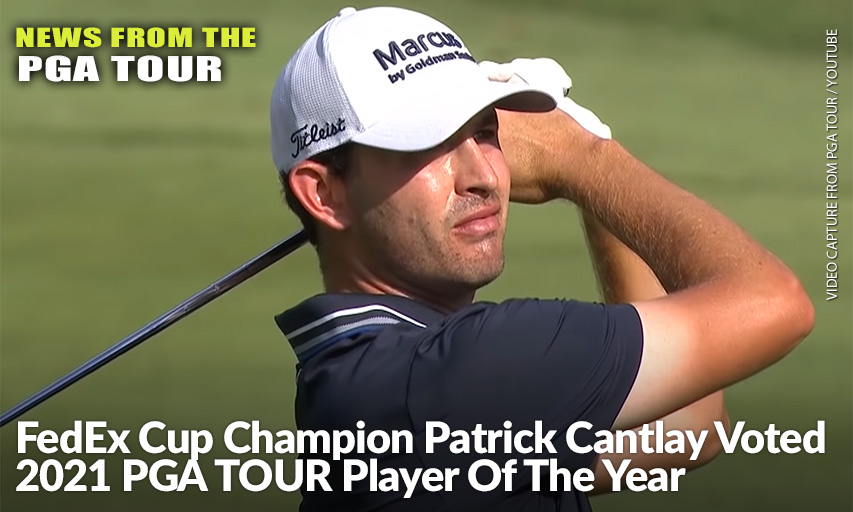 PONTE VEDRA BEACH, Florida — The PGA TOUR announced  that FedExCup champion Patrick Cantlay has been named the 2021 PGA TOUR Player of the Year as voted by the TOUR’s membership for the 2020-21 season. Cantlay won four times on the season including back-to-back victories in the FedExCup Playoffs.

Cantlay, who will receive the Jack Nicklaus Award for winning PGA TOUR Player of the Year, was selected for the honour over (alphabetically) Bryson DeChambeau, Harris English, Collin Morikawa and Jon Rahm.

“On behalf of the PGA TOUR, I would like to congratulate Patrick Cantlay on being honoured as the 2021 PGA TOUR Player of the Year,” said PGA TOUR Commissioner Jay Monahan. “Receiving this award through a member vote reflects the respect his peers have for Patrick. His play throughout 2020-21 was phenomenal, and in stepping up to win consecutive FedExCup Playoffs events and the FedExCup, Patrick was at his best when it mattered most in our season.”

With wins at the ZOZO CHAMPIONSHIP, the Memorial Tournament presented by Nationwide, BMW Championship and TOUR Championship, Cantlay (4) was the only player with more than two during the 2020-21 season. The last player with four or more victories in a single season on the PGA TOUR was Justin Thomas in 2016-17.

Cantlay shot a final-round 65 to win the ZOZO CHAMPIONSHIP by one stroke over Jon Rahm and Justin Thomas, with his second win of the season coming via a playoff against Collin Morikawa at the Memorial Tournament. At the BMW Championship, Cantlay set the record for most Strokes Gained: Putting during the ShotLink era (14.577) en route to defeating Bryson DeChambeau in a six-hole playoff. He beat Rahm by one stroke at the TOUR Championship the following week. Every player that finished runner-up to Cantlay in his four wins either won a major championship or THE PLAYERS at another point in the season (DeChambeau, Morikawa, Rahm, Thomas).

In all, Cantlay made 24 starts and recorded seven top-10s, with top-five finishes at The American Express (2nd) and the AT&T Pebble Beach Pro-Am (T3) complementing his four titles. He was the only player to finish in the top 30 in the four major Strokes Gained categories (Off the Tee, Approach the Green, Around the Green, Putting).

Cantlay joined the PGA TOUR as a member for the first time in the 2013-14 season but made just six starts over the next three seasons as he recovered from a back injury. In 2016-17, Cantlay qualified for the TOUR Championship despite making only 13 starts and finished 29th in the FedExCup standings. He won twice on the PGA TOUR before the start of this season (2017 Shriners Children’s Open, 2019 the Memorial Tournament) and has now qualified for the TOUR Championship in four of the last five seasons.

PGA TOUR members who played at least 15 official FedExCup events during the 2020-21 season were eligible to vote.