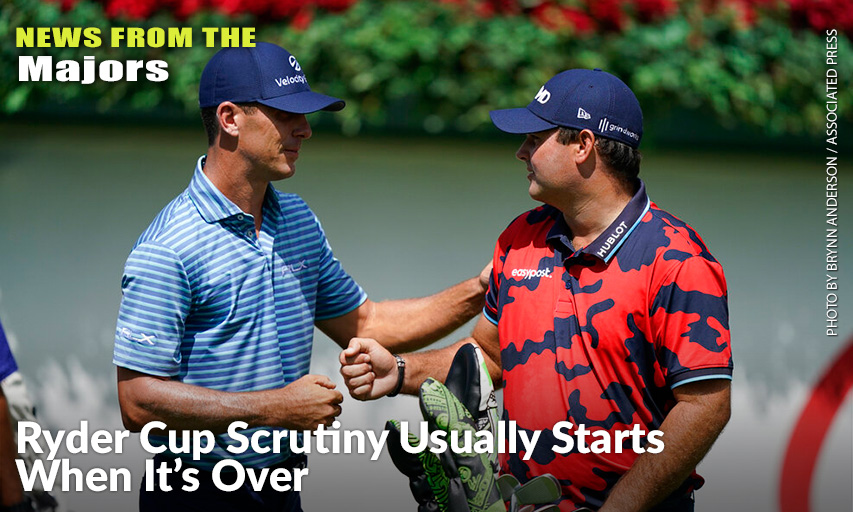 Steve Stricker and Padraig Harrington have been Ryder Cup captains for nearly three years, long enough to know not every decision they make is going to be popular.

Deciding whether they were the right moves won’t start until the Ryder Cup is over.

Except for an English seed merchant, Samuel Ryder, who donated his name and a gold trophy to the event nearly a century ago, this could just as easily be called the Hindsight Cup.

“There’s been captains who did a good job and it doesn’t equate to a win,” Stricker said during his two-hour drive home from Whistling Straits.

He laughed before adding, “It can be a thankless job.”

Plenty of gratitude filled the mid-September air off Lake Michigan when 11 of his players and their caddies — Brooks Koepka stayed home to heal his ailing wrist — spent the last two days in Wisconsin getting better acquainted with Whistling Straits.

To say it showed commitment like never before would be to overlook 2006, when Tom Lehman persuaded his entire team to go from Ohio to Ireland for a practice session at The K Club, and a couple of them went straight to Boston from there for the next tournament.

That didn’t turn out to be terribly productive, for practice or the real thing. Europe won big again.

“It was a good couple of days, everything about it,” Stricker said. “They got to see the golf course, and it was good being with everybody.”

Stricker didn’t sound overly concerned about Koepka, who hurt his wrist when he hit a tree root under the turf at East Lake during the Tour Championship. For now, they are planning on him being there next week.

“I touch base with him every other day. So far, so good,” Stricker said. “He sounds confident. He’s taking it slow.”

Moving forward at any speed has been Stricker’s message from the start, even though there are plenty of lingering views — not his own — looking back.

Patrick Reed wasn’t at Whistling Straits. Stricker chose not to pick him because of uncertainty over Reed’s health. Reed missed three straight tournaments and was hospitalized five days with what he says was pneumonia.

His name surely will be brought up if the U.S. doesn’t win the cup, even though Reed has been part of only one winning team and played poorly in losing both his team matches with Tiger Woods in Paris. He later complained it wasn’t smart for Jim Furyk to sit him out twice.

Reed and Jordan Spieth are 8-1-3 in the Ryder Cup and President Cup as partners. Spieth is 7-3-0 with other players, while Reed is 0-7-0 when not playing with Spieth.

And then there’s Billy Horschel, who two weeks ago in Atlanta made it sound as though he hadn’t done enough to deserve a pick. He tied for the seventh-best score at East Lake. Before that, he had gone 11 straight events without a top-10 finish since winning the Dell Match Play.

After the U.S. team was set, Horschel won the BMW PGA Championship at Wentworth.

Should he have been picked?

“I didn’t play consistent enough over the last few months to really give myself a great chance to be picked,” Horschel said.

The last time his timing was off — he won the last two FedEx Cup playoff events in 2014 after the Ryder Cup team was set — the Americans changed their system to save the final pick for the Sunday before the Ryder Cup.

Form doesn’t always last. Brandt Snedeker was a pick in 2012 after he won the FedEx Cup, and he went 1-2-0 at Medinah.

Harrington’s choice became tougher when Bernd Wiesberger played his way onto the team, which ultimately bumped out former British Open champion Shane Lowry, who then became a somewhat obvious choice as a captain’s pick.

That left Sergio Garcia, Ian Poulter and Justin Rose for two spots. Rose was the odd man out, and probably not even in the conversation until a closing 65 to tie for seventh at Wentworth.

Rose has partnered with only two players on this European team, and his Ryder Cup record doesn’t stack up to those of Garcia and Poulter. Harrington sounded just as gutted about having to leave off Alex Noren, who he thought was a great fit statistically for Whistling Straits.

Were they the right choices? Check back as the sun falls over Whistling Straits on Sept. 26.

No one seemed to find too much fault with the four players Furyk chose to fill out his American squad. One was Woods, who contended in the last two majors and won the Tour Championship and, well, he’s Tiger Woods.

And then when it ended, Woods looked out of sorts and failed to win a match for the second straight time in the Ryder Cup. Mickelson played twice and lost both times. DeChambeau had each of them as partners and didn’t get a point in three matches.

Finau was the lone bright spot.

The course was too narrow, negating any U.S. advantage in length, and therefore Furyk chose the wrong players. Or they didn’t play well. Or maybe, as Mickelson said that evening, Europe played “some exquisite golf.”

That can happen, which might explain why Europe has won nine of the last 12 Ryder Cups. The Americans are still looking for a solution. What they get instead is second-guessing.