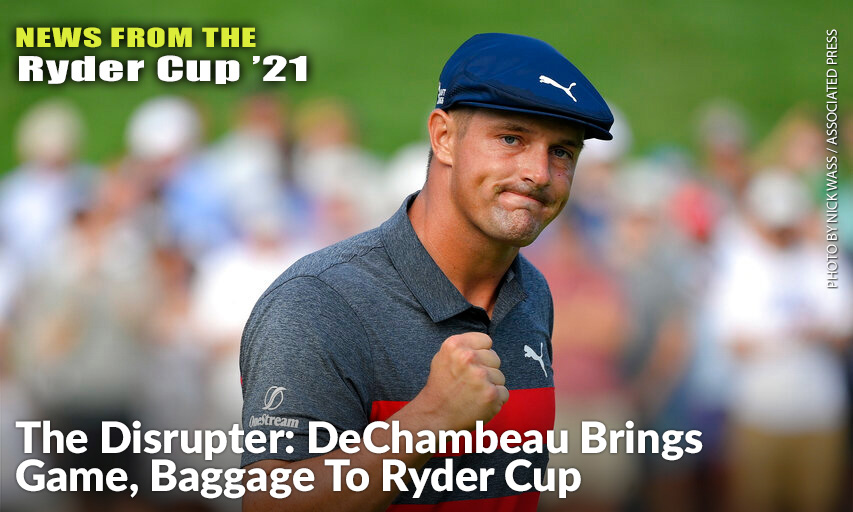 It’s one thing for Bryson DeChambeau to try to change golf when he’s doing it only for himself.

Now comes the Ryder Cup, where the world will get to see how his single-minded pursuit of non-conformity and power fits in the realm of a team competition.

When DeChambeau arrives at Whistling Straits in Wisconsin for the showdown between the United States and Europe that opens Sept. 24, the 6-foot-1, 235-pound disrupter with a world-leading driving average of 323.7 yards will bring with him an epic amount of baggage.

He is in the middle of a months-long feud with one of his teammates, Brooks Koepka, who happens to have three more major titles than DeChambeau.

He arrives only a few weeks after the PGA TOUR’s much-discussed update to its policy for fans, which asks for more decorum from spectators, including those who were increasingly shouting out “Brooksy” as a way of taunting DeChambeau.

He’s had encounters that range from awkward moments to full-fledged fights with everyone from his equipment reps to photographers to his former caddie to FedEx Cup champion Patrick Cantlay, another longtime foe who, for one week, will be his teammate.

Cantlay is among the many who have been asked to chime in on DeChambeau’s impact on the game. He recently suggested some of the antics could be a byproduct of the PGA TOUR’s new Player Impact Program, which awards players who “move the needle” on social media and elsewhere.

“I think when you have people that go for attention-seeking maneuvers, you leave yourself potentially open to having the wrong type of attention,” Cantlay said.

Rory McIlroy, the European headliner who conceded his own game went sideways earlier this year when he spent time trying to match DeChambeau yard for yard with the driver, said he believes some of DeChambeau’s problems could be self-inflicted. But he also said he felt some sympathy for him.

“Because I don’t think that you should be ostracized or criticized for being different,” McIlory said. “And I think we have all known from the start that Bryson is different and he is not going to conform to the way people want him to be.”

From the way his clubs are made — all shafts the same length — to his scientific analysis of the golf swing, to his more recent piling on of 30 or more pounds of muscle mass to increase strength and, thus, his swing speed, DeChambeau has prided himself in doing things differently.

He won his first major title — the 2020 U.S. Open — after those changes and is in contention as much as anyone on the PGA TOUR. But his insistence on resetting some boundaries in golf has made him an easy target for criticism.

After taking heat for comments he made about the COVID-19 vaccine in the wake of a positive test that kept him out of the Olympics, DeChambeau stopped doing interviews with all but his own, hand-picked members of the media.

In one of the few Q&As of any sort he has conducted recently, the story was focused not on the Ryder Cup — a career highlight for many players — but on his preparations for a long drive competition the week after. DeChambeau’s decision to enter the event raised eyebrows not only for the timing but because long-drive contests belong to a fringe segment of the golf world — one not inhabited by PGA TOUR pros.

“I know how to kind of balance it — for the most part,” DeChambeau told golf.com about the line between his “speed training” for the driving contest and his regular work for regular golf. “Why not go hard at life and do both?”

He conceded his hands “are wrecked” from all the swinging of the driver — an admission that will certainly come under the microscope if he struggles at Whistling Straits, where DeChambeau figures to capture more eyeballs than any of the other 23 players.

Trying to build a team around all that is the U.S. captain, Steve Stricker, who has said that while he doesn’t envision pairing up Koepka with DeChambeau in any of the two-man games, the feud between the two is over — or at least on hold through the Ryder Cup.

“It’s not an issue. I’m being totally honest with you,” Stricker said. “I talked to them a month ago, and they told me it wasn’t going to be an issue.”

Still, captains spend years trying to figure out chemistry for Ryder Cup teams. Among the biggest unknowns is how DeChambeau will fit into what could be viewed as the first truly 21st century U.S. team — one without either Tiger Woods or Phil Mickelson playing for the first time since 1993.

Certainly, there are cliques and good friends mixed in among the group — Jordan Spieth and Justin Thomas are great friends, Xander Schauffele and Cantlay are buddies who went 2-2 together at the last Presidents Cup — but what will those team dinners and post-practice ping-pong games look like with DeChambeau in the mix?

It’s a question made all the more critical because, over nine losses spanning the last 12 meetings since 1995, the U.S. has developed the reputation as the backbiting team that points fingers (often after the losses), while Europe wins with hugs and flag-waving and fun.

“A number one fundamental is fun,” 2014 European captain Paul McGinley said on the High Performance podcast, when asked about the differences between winning and losing over the years. “If we think that this is the most important thing we’re ever going to do in our lives, we’re not going to perform. We’re going to be tight with expectation.”

DeChambeau hasn’t opened up much about his expectations for the Ryder Cup. Stricker’s job is to figure out how he’ll fit golf's most eccentric player onto a two-man team, whether in the best-ball or alternate-shot formats that make up the first two days.

Would the player who has built a career on sacrificing accuracy for distance ever be willing to play it safe for the good of the team?

And how will the partner paired with DeChambeau react not only to his strategic moves, but to his overall personality over five hours of grueling match play during which collaborative decision-making is a must?

“It’s important that there’s a synergy between the two of them,” McGinley said when asked a general question about pairings. “And not just that they get on well, but they understand each other’s games.”

What’s become clear over the last few years is that while some might claim to understand DeChambeau’s game, nobody else out there plays it.