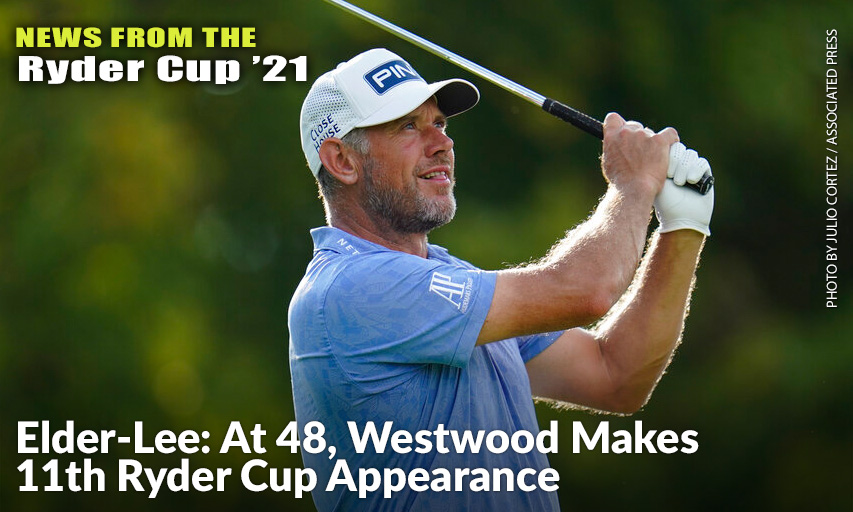 SHEBOYGAN, Wisconsin — The stubble on his beard matches the color of that small shock of hair near Lee Westwood’s temple — gray. Instead of calling him old, Westwood suggests “mature” might be a better way of putting it.

Or, you could put it like this: The 48-year-old Englishman is heading into his record-tying 11th Ryder Cup. At his first one, in 1997, he partnered with Nick Faldo, who is now 64 and doing TV work. In the leadup to this one, which begins at Whistling Straits, Westwood is mentoring, among others, Viktor Hovland. The 24-year-old Hovland was 10 days old when Westwood made his debut at Valderrama.

“Week in, week out, I play with somebody that’s the age of my son now,” Westwood said.

This, however, is no ceremonial, rocking-chair farewell for the man who has played in 44 Ryder Cup matches and won 20, leaving him in range (along with Sergio Garcia) of breaking Faldo’s European records in both categories. In 2021, Westwood has not only been playing with people half his age but beating many of them as well.

In back-to-back weeks in March, Westwood played with Bryson DeChambeau in the final pairings at the Arnold Palmer Invitational and The Players Championship. Though Westwood finished second both weeks, behind DeChambeau at the Palmer and Justin Thomas at The Players, the results earned him $2.6 million and vaulted him up the points lists for Europe’s Ryder Cup team.

He earned one of the nine automatic qualifying spots and will tie Faldo’s European record by making his 11th appearance.

“It’s one of the cool things about it, is it does come full circle,” said Rory McIlroy, who is entering his sixth Ryder Cup and would need to make every team through 2031 to match Westwood’s staying power.

This is exactly the sort of return Westwood was hoping for after missing the team in 2018 and, at 45, heading to France as a vice captain whose playing days in the Ryder Cup were — most suspected — behind him.

“I said to the lads in the team room three years ago, ‘There’s one thing worse than playing Ryder Cup practice rounds, and that’s watching somebody else do it,’” Westwood said.

This year, all but one of Europe’s vice captains, 52-year-old Robert Karlsson, is younger than Westwood.

He credits his recent resurgence in part to his wife, Helen Storey, a fitness consultant who helped him get into a regular workout routine that’s been good for his golf.

Storey also works as Westwood’s caddie most weeks. This weekend, though, she’ll hand that role over to Westwood’s 19-year-old son, Sam, who Westwood concedes might have more in common with Hovland and some of the players than he does with his dad.

“I would say they chat about more things that they can both relate to than myself,” he said.

Westwood is not the only player in the 40-plus crowd redefining what’s possible in golf of late. Along with the 41-year-old Garcia, Stewart Cink (48) and Brian Gay (49) also won on tour last season. At age 50, Phil Mickelson won the PGA Championship. But none of them qualified for the Ryder Cup. Mickelson is at Whistling Straits as an assistant captain, ending his own string of 12 Ryder Cups as a player.

Back in 2010, Westwood overtook Tiger Woods as No. 1 in the world and the debate about Westwood centered on when, or if, he would shed the title as best player to never win a major. Never happened. After this year’s British Open, he overtook the record as the man with the most starts in major championships (88) to never have won a title.

And yet, he is still in the mix — at the majors on occasion, on a more frequent basis on both the PGA and European Tours, and at the Ryder Cup, where his career now spans four different decades with a record of 20-18-6.

Asked what has made him such a steady hand at the Ryder Cup for all these years, Westwood suggested it could be that he gets along well with most people or that he hits lots of fairways and greens or that he makes lots of putts when he needs to, “despite what people’s opinions might be.”

Or, put even more succinctly by a man who speaks from experience: “I’m a pretty good golfer.”