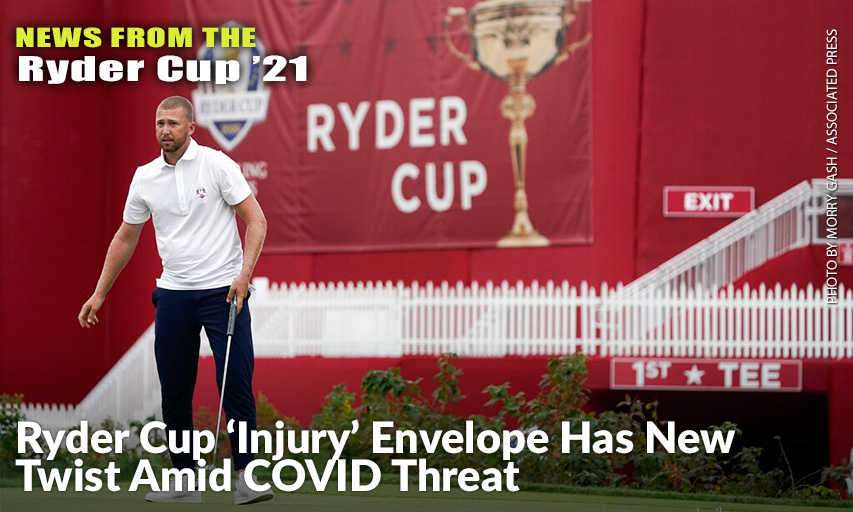 SHEBOYGAN, Wisconsin — As if there wasn’t enough suspense and second-guessing of the Ryder Cup captains in past years, a nod to the COVID-19 pandemic could make things more topsy-turvy than usual this time around.

Previously, when the captains announced their lineups for Sunday’s singles matches on Saturday night, they also had to submit a so-called “injury” envelope; that held the name of a single player who, if his opponent was unable to play, would be withdrawn and the match declared a tie. The last time the envelope was actually opened was at the Belfry in 1993, when Scotsman Sam Torrance had to withdraw because of a foot injury and his match against Lanny Wadkins — whose name was in the U.S. envelope — was ruled a tie. That slowed, but didn’t stop an American victory.

But this year, allowing for the possibility of a positive COVID-19 test, or tests, at the last minute, U.S. captain Steve Stricker and European counterpart Padraig Harrington will be required to put three names in the envelope. What remained unclear was whether one or more of those three players could be replaced, and how the process would work.

Under the current agreement, Stricker would be able to replace a single player with anyone he chooses — from non-playing assistant captain Phil Mickelson to a player who flies in at the last moment. Harrington’s choice would be more constrained; he’d have to choose a replacement from the same qualification category as the player ruled out by injury or a positive COVID-19 test.

Sunday singles is the only session at the Ryder Cup where everyone has to play — captains send out four two-man teams for the morning and afternoon sessions on both Friday and Saturday.

Harrington said it was “above the pay grade of the two captains” as to whether — and even how — the captains would select more than a single substitute for the final day of matches.

“While we’ve asked,” Harrington added a moment later, “it’s still not completely clear what happens when we have — if, God forbid, we had a COVID outbreak of a number of players. But for one player it’s pretty straightforward.”

In a statement the PGA of America called a “clarification,” the only thing clear was that the selection process in case of multiple substitutions had yet to be finalized.

“In terms of multiple players testing positive, either from one team or on both teams, while not speculating on precise numbers, the exact details of the scenario would be assessed by both organizations in order to determine its impact on the overall playing of the Ryder Cup,” the statement said.

In other words, the teams and the PGA intend to cross that bridge only if and when they get to it.