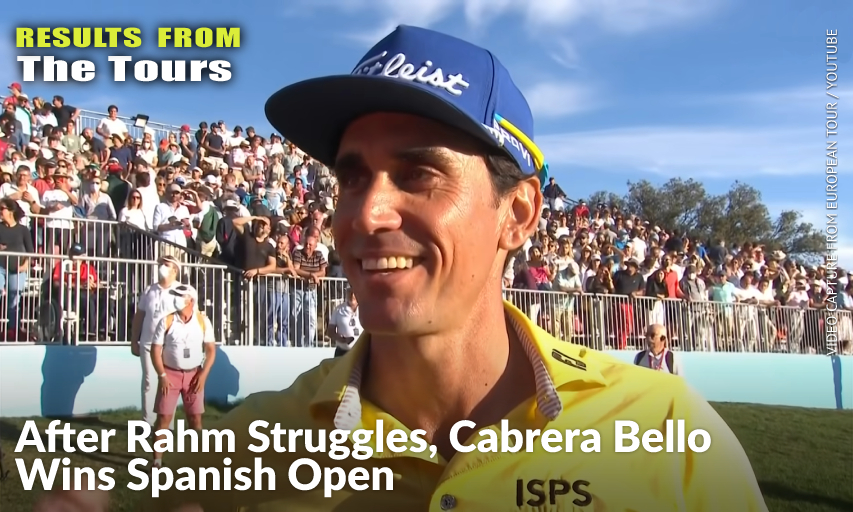 MADRID, Spain (AP) — With Jon Rahm out of contention, Rafa Cabrera Bello prevailed in a Spanish duel with Adri Arnaus on the first playoff hole to win the Spanish Open.

Cabrera Bello shot a 2-under 69 in the final round to finish tied at 19 under par for the tournament with Arnaus, who closed with a 4-under 67 and fell just short of his first European Tour victory.

It was the fourth European Tour win for Cabrera Bello, and his first since the 2017 Scottish Open. The 37-year-old Spaniard was second to Rahm in the last edition of the Spanish Open in 2019. The tournament was not played last year because of the coronavirus pandemic.

“I knew it was going to be a really hard battle today,” Cabrera Bello said. “I’ve been believing in myself and I’ve had an amazing support all this week. I was just hanging in there and I knew I would have an opportunity and I’m glad luck fell my way.”

Top-ranked Rahm, who was a two-time defending champion at the Spanish Open, couldn’t make a move in the final round and shot 69 that left him in a disappointing tie for 17th on 13 under overall at the Club de Campo Villa de Madrid. The U.S. Open champion had started the day six shots off the lead and finished the same distance back.

Three players ended two shots off the lead — Frenchman Julien Guerrier (69), India’s Sharma Shubhankar (66) and Scotland’s Grant Forrest (65), who had a hole-in-one in the first round and finished with five birdies and an eagle on his last seven holes.

Arnaus and Cabrera Bello were tied for the lead entering the last three holes and both had errant shots off the tee on the 18th. Cabrera Bello saved par from the greenside bunker while Arnaus hit it close with his approach but missed the birdie putt that would have given him the win.

Both missed the fairway again on the 18th in the playoff, but Cabrera Bello went closer and rolled his 11-foot putt for a birdie and the victory.

Cabrera Bello had entered the final round with a two-shot lead but immediately lost his cushion with a double bogey on the first hole. He then had four birdies, including three on the back nine, to force the playoff.

“I don’t think I need to say that I didn’t get off to the ideal start,” Cabrera Bello said. “I came here in a pretty bad place with scores being not what I expect them to be, and to be able to get momentum and turn it around and to walk out of here with a win means a lot to me. Hopefully I can keep going and get back to the player I know I can be.”

Arnaus shot two eagles and two birdies, with two bogeys. He was seeking his first European Tour win in 72 appearances. The 26-year-old Spaniard finished second three times in his rookie season in 2019, including at the Andalucia Masters in Spain.

“I’m very proud of having played some great golf and having put on a show for this great crowd,” Arnaus said. “In the end it wasn’t meant to be, but I’m very happy and excited for what’s ahead. I’m sure I’ll have many other opportunities.”

Rahm was back in Spain for the first time in nearly two years and was trying to win his third straight Spanish Open title to tie Seve Ballesteros as a three-time winner.

Rahm had opened the tournament with a 63 to start near the top but couldn’t get it going again after that. He had two bogeys to offset two birdies before the turn [in the final round], then picked up only two more birdies on the back nine.

“I played well. If I had putted better maybe I could’ve finished a bit higher,” he said. “I’m frustrated because I don’t recall a round in which I’ve left so many putts short like I did in this one. I’m not sure what happened. Things just didn’t go my way.”

Wilco Nienaber of South Africa had the best round of the day with a 7-under 64 to finish in a tie for sixth.