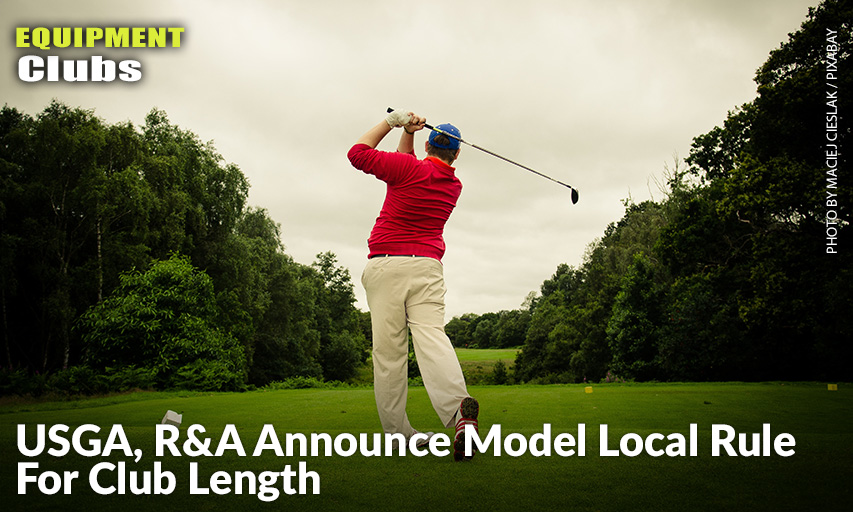 LIBERTY CORNER, New Jersey, and ST. ANDREWS, Scotland — The USGA and The R&A have announced that a new Model Local Rule (MLR G-10) will be available beginning on January 1, 2022 to provide those running professional or elite amateur golf competitions the option of limiting the maximum length of a golf club (excluding putters) to 46 inches.

The proposal was announced in February 2021, which opened a notice-and-comment period to allow the industry the opportunity to provide feedback as part of the equipment rulemaking procedures. The comments received from the golf industry, including players, professional tours and equipment manufacturers, were carefully considered before the decision to proceed with the new MLR was reached.

The USGA and The R&A issued an Area of Interest notice in 2014 indicating that research was being conducted into the impact of club lengths of more than 48 inches on hitting distance and whether that limit remained appropriate. A proposed change to the limit was subsequently put forward in 2016 but was put on hold in 2017 when the Distance Insights project got underway.

Mike Whan, chief executive officer of the USGA, said, “We’ve worked closely with our industry partners to ensure the future for golf remains strong. Admittedly, this is not the ‘answer’ to the overall distance debate/issue, but rather a simple option for competitive events. It’s important to note that it is not a ‘Rule of Golf,’ and as such, it is not mandated for the average, recreational golfer. Rather, this is an available tool for those running competitive events.”

Martin Slumbers, chief executive of The R&A, said, “We have taken time to consult fully with the golf industry, including players, the main professional tours and equipment manufacturers, and have considered their feedback carefully. We believe this is the right thing for the game at this time and will provide tournament organizers with the flexibility to choose for themselves within the framework of the Rules. We are working hard to maintain an open, collaborative and considered dialogue with these key stakeholders as we continue to evolve the Equipment Standards Rules to ensure they reflect the modern game.”

The proposals submitted in February for changes to the testing method for golf balls and the testing tolerance for spring-like effect are still under consideration. The governing bodies plan to consider feedback on these proposals in line with the responses to the broader Area of Interest – Research Topics notification, which are due by November 2.

The detail of MLR G-10 can be found here: Model Local Rule

About The R&A
References in this document to The R&A are to R&A Rules Limited. Together The R&A, based in St Andrews, Scotland, and the USGA govern the sport of golf worldwide, operating in separate jurisdictions but with a commitment to a single code for the Rules of Golf, Rules of Amateur Status and Equipment Standards. The R&A governs the sport worldwide, outside of the United States and Mexico, on behalf of over 36 million golfers in 144 countries and with the consent of 159 organisations from amateur and professional golf.

The R&A aims to invest £200 million in developing golf over a decade and supports the growth of the sport internationally, including the development and management of sustainable golf facilities. For more information visit www.RandA.org.