LPGA Player Of The Year Coming Down To Ko & Nelly Korda 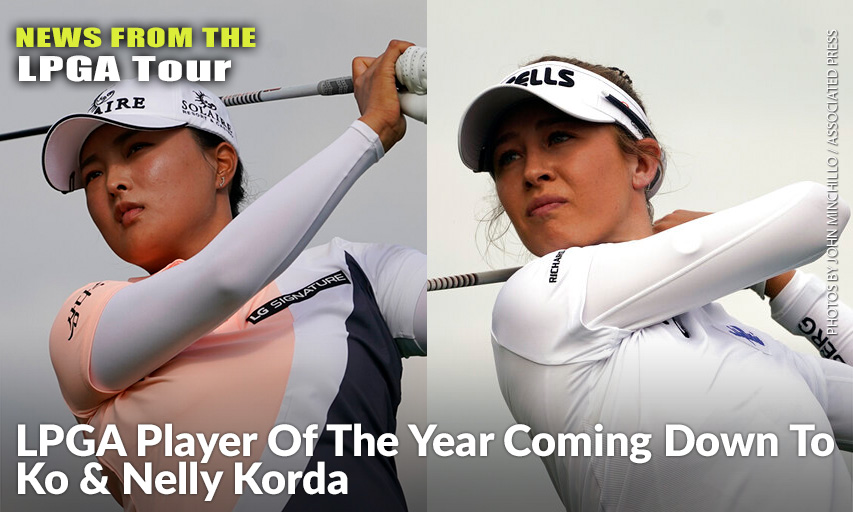 The LPGA Tour decides its player of the year based strictly on points. If those were style points, Nelly Korda would be tough to beat.

Korda’s three LPGA victories this year include her first major, the KPMG Women’s PGA Championship at Atlanta Athletic Club, which elevated the 23-year-old American to No. 1 in the world. Throw in a gold medal from the Tokyo Olympics, and she has put together the most memorable year in women’s golf.

But the best year? Jin Young Ko would like a word.

Coming off a six-week break after a disappointing Olympics, during which Ko worked with her old coach in South Korea and found a putter she likes, she has won three of her last five starts on the LPGA Tour and was runner-up in the ShopRite LPGA Classic.

Her victory in the BMW Ladies Championship not only returned her to No. 1 in the world, Ko took over the lead in the Race to the CME Globe, both positions previously belonging to Korda.

And she now has a 15-point lead over Korda with two tournaments remaining. Winning is worth 30 points — 12 points are awarded for second — so the race is far from decided.

Korda has a slight lead for the Vare Trophy for lowest scoring average — 69.07 to 69.18 — though neither player will be eligible for the award because they haven’t played enough rounds.

Ko became a footnote in history at the BMW Ladies Championship by getting the 200th career win by a South Korean player. It extended her late-season surge, which began with her first victory of the year at the Volunteers of America Classic in July.

There was a reason for the slow start. Her grandmother became ill and Ko couldn’t get home to South Korea and her preparations for the majors because of COVID-19 travel restrictions.

She said she even questioned what she was doing with her life.

“I came to think, ‘What’s the use of all this?’ I was very skeptical about why I was playing golf when I couldn’t be there for my grandmother,” she said.

She managed to get home after the HSBC Women’s World Championship in Singapore in early May to see her grandmother one last time before she died.

“I place a high value on happiness. So golf is a means to get there. It’s not an end for me,” Ko said. “So at the time I became really doubtful about why I was playing golf. But I think time heals everything. And after Singapore, I came to Korea, I was able to meet my grandmother, and it just gave me a lot of comfort.”

Ko and Korda are playing the final two events — the Pelican Women’s Championship in the Tampa Bay, Florida, area on Nov. 11-14, followed by the CME Group Tour Championship down the Gulf Coast in Naples.

Brian Gay had to wait more than seven years for the chance to defend another title on the PGA TOUR. Turns out the hard part was just getting back to Bermuda.

Gay and his wife, Kimberly, were bumped from their American Airlines flight Monday from Charlotte, North Carolina, because he said agents told them the plane was too heavy.

The next flight was Tuesday.

“Japan to Bermuda would have been easier than going through Charlotte,” Gay said, alluding to the charter flight from the Zozo Championship, which he did not play.

Gay wasn’t alone. He said Vaughn Taylor also was supposed to be on the Bermuda flight and could not board, though Taylor’s bags were headed there.

The Butterfield Bermuda Championship starts Thursday at Port Royal, the second straight year it offers full FedEx Cup points — and a spot in the Masters to the winner — because the World Golf Championship event in Shanghai was canceled again because of COVID-19 restrictions.

Gay, who turns 50 in December, won in a playoff last year over Wyndham Clark for his fifth career PGA TOUR title and his first since 2013.

He said their flight from Orlando, Florida, was running behind but pulled into the gate next to where the flight to Bermuda was leaving.

“We walked up to the gate and there were a dozen people standing there, one of them my caddie,” Gay said. “My caddie was talking to an agent and said: ‘We can’t get on. The plane is too heavy.’ They said we needed enough gas to get there and to Philadelphia in case they can’t land, and they couldn’t have any more weight.”

Gay’s wife said eventually six more passengers were let on the plane. They were too far back in the line and were left behind. So much for the glamor of playing the PGA TOUR.

The QBE Shootout in Florida was a sign of a big year to come for Harris English when he teamed with Matt Kuchar to win the December exhibition.

Harris and Kuchar return as part of a 24-player field on Dec. 9-12 in Naples, Florida.

The field features four members of the Ryder Cup at Whistling Straits, including U.S. captain Steve Stricker. The others are English, Ian Poulter and Lee Westwood, who will be playing the Shootout for the first time since 2013.

Lexi Thompson from the LPGA Tour returns for the fifth straight time, while the newcomers are Max Homa, Sam Burns, Hudson Swafford and K.H. Lee.

STREAK ON THE LINE

Starting with Tony Finau winning The Northern Trust to begin the FedEx Cup playoffs, the PGA TOUR has had eight consecutive winners who were among the top 50 in the world.

That streak is in jeopardy at the Butterfield Bermuda Championship, mainly because the field only features three players from the top 50 — Patrick Reed at No. 24, Matt Fitzpatrick at No. 26 and Christiaan Bezuidenhout at No. 43.

According to the PGA TOUR, five straight winners in the top 50 to start a new season is the longest streak since 2005, which began with eight consecutive winners in the top 50. That ended with Geoff Ogilvy (No. 83) winning the Chrysler Classic of Tucson for his first tour title.

Patty Tavatanakit has wrapped up the Louise Suggs Rolex Rookie of the Year on the LPGA Tour with two tournaments remaining.

Tavatanakit’s big year includes winning the first major at the ANA Inspiration. She had eight other finishes in the top 10, two of them at majors.

The 22-year-old Thai player previously clinched the Rolex Annika Award for having the best cumulative results in the majors. Along with her ANA Inspiration win, she tied for fifth in the Women’s PGA and tied for seventh in the Women’s British Open.

Cameron Tringale surpassed $15 million in winnings without having won on the PGA TOUR in 314 starts. The Zozo Championship was his first runner-up finish in six years. ... A pair of Grand Slam winners will be partners in the PNC Championship in December. Women’s PGA champion Nelly Korda is playing with her father, Petr, who won the Australian Open in tennis in 1998. Also making his debut is Henrik Stenson alongside 11-year-old son Karl. ... Hideki Matsuyama is the fourth Masters champion in the last 10 years to win in his home country the same year. The others were Charl Schwartzel (Joburg Open), Adam Scott (Australian PGA) and Sergio Garcia (Andalucia Valderrama Masters).

Bernhard Langer has as many wins (42) on the European Tour as the PGA TOUR Champions.

“I don’t think I’ve ever been a favorite for a tournament before.” — Matt Fitzpatrick, the betting favorite at the Butterfield Bermuda Championship. He is one of only three players from the top 50 in the world at Port Royal.