When Pull Comes To Push In Golf, Which Is Healthier? 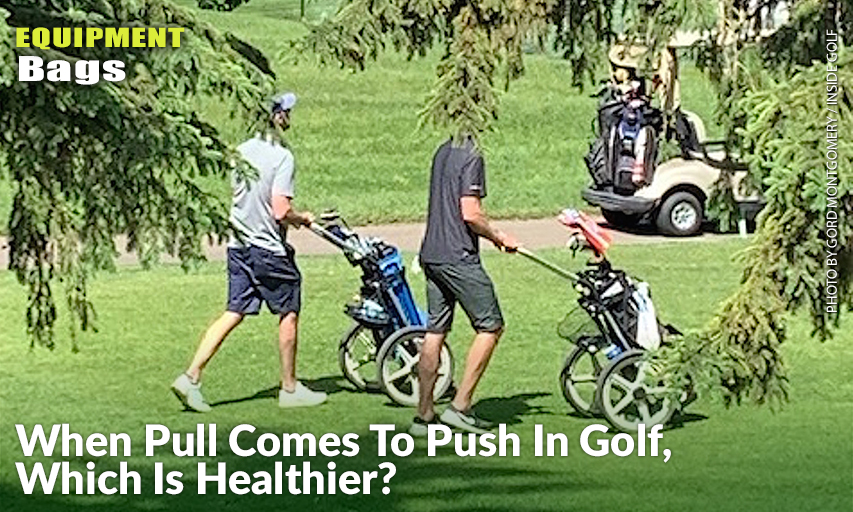 SPRUCE GROVE, Alberta — If you think there’s no difference between pulling a golf buggy instead of pushing one about the links, it’s maybe time you rethought that strategy. You see, pulling a can be somewhat hazardous to your health.

While there are no written rules on this matter, although in the world of golf rules reign supreme, pulling a cart, loaded with several pounds of assorted this-and-that can be bad, very bad, for your upper body over time. After all, a filled to the brim golf bag can weigh anywhere in the neighbourhood of 13.6 kilos (30 pounds) and up. And that’s a lot of weight to be yanking up that steep hill on the 16th hole of your local layout.

To break down the differences between the two types of self-propelled bag carriers is quite simple: Pull carts generally have only two wheels, and are the ones with the oversized wheels you generally see for rent at a course. Push carts on the other hand have three of four wheels. Because of that extra wheel, or two, push carts generally roll easier, further easing the strain on one’s upper extremities.

When asked about such an issue, physiotherapist Jeff Cubos, from Back On Track in Spruce Grove, said the question was, for him at least, an unusual one. But, he agreed, damage could occur from pulling a heavy load as opposed to pushing the same.

“That’s an interesting topic but to be honest, I’ve never really come across that. But, if I have a pull cart, I push it, if that makes sense. But scientifically, I could see how that (injury) could happen. When you’re pushing, you can put your body weight behind it and you don’t have to grip as hard. But when you’re pulling, there’s a lot of gripping, a lot of what’s called eccentric stress where muscles are being lengthened while you’re contracting it. That usually puts a greater load to the muscles and tendons than when you’re pushing the cart. When you’re pulling, there’s a greater chance of stress to the muscles.”

Speaking to the benefits of using a push cart versus a pull cart, Robb James, the head professional at the Stony Plain Golf Course, explained that shoulder damage can occur over a very short period and that’s not a good thing. He did agree that he’s seen more golfers walking their appointed rounds than usual lately, so bag carts are popular. A lot of that, he suggests, is because many courses didn’t have the power cart fleet to handle pandemic one-person-per-cart rules, thus meaning if you played you walked. And although restrictions have eased, many folks have just kept on walking.

As to the push versus pull matter, James commented, “When you’re pushing you typically have both hands in front of you,” meaning less stress on arm and shoulder muscles. “When I watch people pulling, it looks like it’s painful,” especially as players near the end of a round. He also noted that four-wheeled carts look “more like grocery carts,” and those have actually fallen out of favour against their three-wheel cousins, at least from what he’s seen in his pro shop.

Another interesting occurrence is that electric walking carts have become much more popular over the past year. “Those are a hands-free convenience,” he noted, with only your thumb needed to propel the cart. “You have the remote in one hand and your cigar in the other,” he joked.

Besides the gripping issues one can encounter in pulling a cart, Cubos added there are other factors involved in suffering some arm muscle soreness/injury. “In addition to having to grip the cart, you’re also gripping the club (upwards of 100 times a round), so you’re just getting a lot of repetition in,” that can theoretically lead to and ailment known as Golfer’s Elbow.

In closing, and put on the spot by being asked what he’d use to haul his sticks around the course, Cubos didn’t hesitate in saying “A push cart, for sure.”

So, if you’re suffering soreness in your wrist, elbow, or shoulder or all of the above after a round of golf where you pulled your sticks from Point A to every letter in the alphabet in between on your appointed round, perhaps it’s time you switched to a push cart. Or, an electric one to save yourself some wear and tear.