On This Fairway, The Grass Really Is Greener 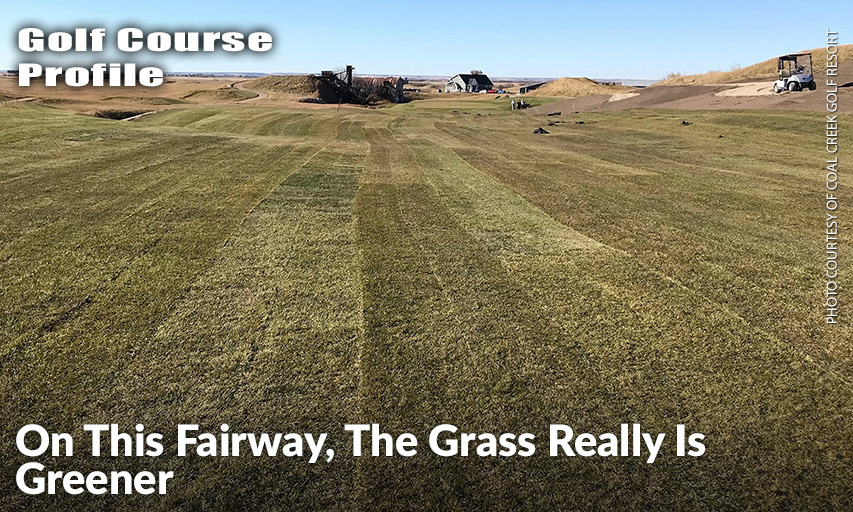 BY GORD MONTGOMERY, Inside Golf

RYLEY, Alberta — Sometimes the grass really may be greener on the other side, but in the case of the Coal Creek Golf Resort, that saying can be taken with a slight caveat. You see, the grass is really greener here - at least on the ninth fairway.

After a quick three-week renovation, the daunting ninth hole at this popular rural Alberta layout has had a facelift and while still likely to be a true test of one’s skill, this par-4 has become, in a cautious word, “easier.”

Now that’s not to say it’s a wham-bam-birdie putt kind of test. Rather, this remains a lengthy challenge that can blow one’s scorecard up in a hurry. You see, while the landing area here has changed to make it easier to stripe one down the middle off the tee box and have it stay on the fairway, it is still a long way from Point A to where you’re pulling out your putter.

From the back tees - and you have to be a brave soul to whack away from there - it’s a stout 459 yards and often into a prevailing westerly breeze. Moving up a block or two, the distances go to 415 then 383 with the front deck laying a ‘scant’ 366 yards from pay dirt.

Now that the in-house work is completed and put to bed for the winter, head pro Jerry Linquist said the project will be appreciated by the majority of players here during the 2022 season and beyond. And while this fairway won’t be in play as soon as the gates fly open next spring, the wait to get a first-hand taste of this work won’t be long.

Linquist didn’t have an exact stat on how many square feet of sod was laid down on the fairway, but he did say, “We had two or three big trucks coming in each day with big rolls and it was pretty non-stop,” over a period of a week or so. “It was a taxing sort of process. Overall, I believe it took five or six days in total,” to put the grass into place never mind the prep work that went into getting the land ready for its new look. If the fairway had been seeded rather than sodded, “That would have taken substantially longer,” to grow in and be playable, the pro noted of the facility taking the more expensive route to the finish line.

As for how long it will be for the grass to establish itself and be ready for play, Linquist said, “The plan is hopefully we’ll be on it in the latter part of May. For sure by June. Ultimately you want to sod anything you could because we already had the top portion of the turf there so the grass will take and be healthier by sodding (as opposed to seeding) especially with traffic beating down on it once it does become playable.”

As of right now no plans have been officially made to make this a cart-path only hole until the new turf has a chance to take a firm hold but that could well be a plan put into place.

“Probably they will keep people off it for a while,” the pro noted. “They’ve built a great cart path system on the hole with access points, so you’ll just park your cart in certain strategic access points and walk out to your ball. The path will have great access to the fairway,” from several spots meaning only a short hike to wherever your great tee shot ends up, which thankfully for many likely won’t be the nasty hazard to the left of that landing area.

In getting this major project done so quickly, Linquist said Mother Nature lent a helping hand.

“We had perfect conditions to do this. I guess we sort of lucked out. You’ve got a good hole there. Now though, this makes it more fair. Before everything funnelled left and into the hazard. The fairway’s been widened and makes the landing area more receptive,” meaning at this popular place, no one is going to be penalized for hitting a good drive on the ninth hole because the former contours of this fairway are now history... and that makes the grass that much greener.