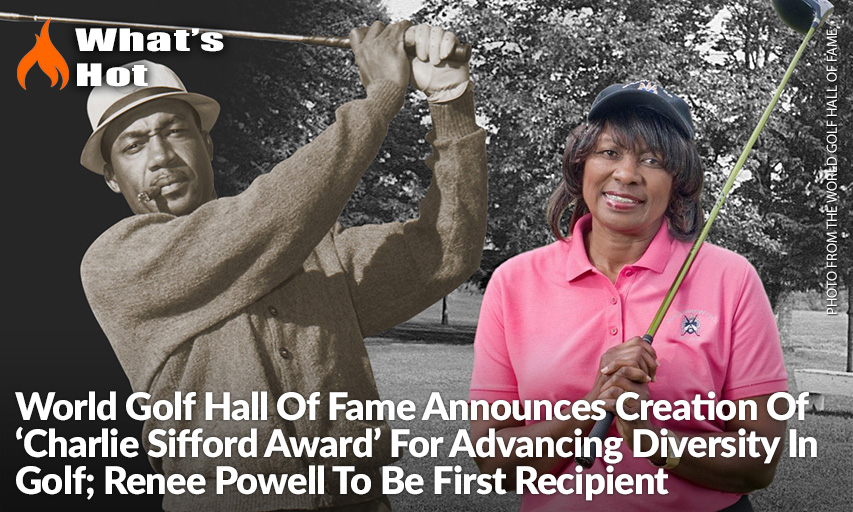 ST. AUGUSTINE, Florida — The World Golf Hall of Fame announced the creation of the Charlie Sifford Award presented by Southern Company, which will honour recipients for their spirit in advancing diversity in golf. The inaugural recipient of the award is Renee Powell, who will be recognized as part of the Hall of Fame’s 2022 induction ceremony on Wednesday, March 9, taking place during THE PLAYERS Championship in Ponte Vedra Beach, Florida.

The award honours an individual who personifies Sifford’s groundbreaking achievements through perseverance, confidence, respect and adaptability. Powell – the second African American woman to ever compete on the LPGA Tour – demonstrated resilience amidst her own obstacles of racial adversity and segregation and dedicated her life to making golf a sport for all.

“As a youngster my parents fought to get me into tournaments when I was not welcomed because of the colour of my skin, which instilled in me how important it is to get young people into the game to help build their self-confidence,” said Powell. “I’m honoured to be the first recipient of this award and to see Charlie Sifford be recognized for breaking down barriers that never should have been put in front of him and all others of colour who strived to play this game. I was taught early on by my parents that golf should be a sport for everyone, and we can all diversify this game in so many ways.”

Powell competed in more than 250 professional tournaments during her career and played as a member of the LPGA Tour from 1967-’80. Since 1995 she has served as the head PGA/LPGA professional at Clearview Golf Club (Ohio), which her father – William Powell – established in 1946 as the first U.S. golf course designed, built, owned and operated by an African American. The club’s Clearview Legacy Foundation (nonprofit) focuses on education, preservation, and research, utilizing golf as a tool to reach everyone, with an emphasis on youth, minorities, veterans, seniors and other underrepresented groups.

“On behalf of the Sifford family, we are immensely proud and honoured to have this award established in my father’s name,” said Charles Sifford Jr. “My father, my number one hero, simply wanted to play the game he loved so much and – in this pursuit – endured enormous challenges as an African American golfer. His skills, perseverance, grit, and determination propelled him to continue his dream. He was successful despite having to overcome multiple barriers of discrimination. His hard-fought efforts paved the way for other minority golfers to pursue their career. This award is honourably illuminated by having a longtime family friend and successful African American female golfer, Renee Powell, as the first recipient. This really is something special.”

“At Southern Company, our behaviors are guided by the principle that how we do our work is just as important as the energy we deliver daily to drive growth and prosperity for nine million customers. During our decades-long association with golf, we have focused on promoting the importance of values by highlighting and celebrating champions of character, charity and sportsmanship,” said Tom Fanning, chairman, president and CEO of Southern Company. “Honouring the spirit of advancing diversity in golf aligns with Southern Company’s commitment to being a role model company on issues surrounding racial equity. Renee Powell is a tremendous inaugural recipient of the Charlie Sifford Award presented by Southern Company for the perseverance, confidence, respect and adaptability Renee has shown throughout her life. Her commitment to these values not only led to great achievement and success in her career, but also introduced so many underrepresented groups to the game and the lessons it teaches all of us.”

Although he turned professional in 1948, Sifford was excluded from the PGA TOUR until 1961, when he became the first African American to compete as a member. Despite the injustice of having some of his best years behind him, Sifford won the Travelers Championship (1967) and Genesis Invitational (1969) and finished in the top-60 on the money list in his first nine years on TOUR. The Genesis Invitational now offers a tournament exemption each year (in his name) to a player who represents the advancement of diversity in golf. In 2004, Sifford was inducted into the Hall of Fame in recognition of his historic contributions in breaking barriers for generations of minority golfers who would follow in his footsteps, including Tiger Woods, 2022 Hall of Fame inductee. Sifford also was the recipient of the Presidential Medal of Freedom (2014) prior to his passing in 2015.

“The creation of this award will establish a platform for celebrating the significance of Charlie Sifford’s contributions to golf in the face of adversity,” said Greg McLaughlin, CEO, World Golf Hall of Fame. “In partnership with Southern Company, the Hall of Fame is committed to ensuring his legacy endures for future generations by recognizing others – like Renee Powell – who are devoted to making the sport a welcome environment for all.”

In addition to Powell, the induction ceremony in March will recognize Dick Ferris and Peter Ueberroth, who recently were announced as recipients of a newly created lifetime achievement award for their contributions to the sport. Competitors Susie Maxwell Berning and Tiger Woods, along with contributors Tim Finchem and the late Marion Hollins, will be inducted as the newest Hall of Fame class. The addition of these four individuals will bring the total number of Hall of Fame members to 164.

The induction ceremony will take place in Northeast Florida for the first time since 2013, with most recent ceremonies held in California (2019), New York (2017) and Scotland (2015).

About the World Golf Hall of Fame
The World Golf Hall of Fame celebrates and honours the legacies of those who have made golf great. The Hall of Fame opened in 1974 in Pinehurst, North Carolina, where 71 members were inducted prior to the transition (in 1998) to its current Florida location, which now recognizes 160 total members. As a 501(c)(3) nonprofit organization, the Hall of Fame partners with 26 national and international golf organizations, including the European Tour, LPGA, the Masters Tournament, PGA of America, PGA TOUR, The R&A and USGA. To learn more, visit www.worldgolfhalloffame.org.

About Southern Company
Southern Company (NYSE: SO) is a leading energy company serving 9 million customers through its subsidiaries. The company provides clean, safe, reliable and affordable energy through electric operating companies in three states, natural gas distribution companies in four states, a competitive generation company serving wholesale customers across America, a leading distributed energy infrastructure company, a fiber optics network and telecommunications services. Southern Company brands are known for excellent customer service, high reliability and affordable prices below the national average. For more than a century, we have been building the future of energy and developing the full portfolio of energy resources, including carbon-free nuclear, advanced carbon capture technologies, natural gas, renewables, energy efficiency and storage technology. Through an industry-leading commitment to innovation and a low-carbon future, Southern Company and its subsidiaries develop the customized energy solutions our customers and communities require to drive growth and prosperity. Our uncompromising values ensure we put the needs of those we serve at the center of everything we do and govern our business to the benefit of our world. Our corporate culture and hiring practices have been recognized nationally by the U.S. Department of Defense, G.I. Jobs magazine, DiversityInc, Black Enterprise, Forbes and the Women’s Choice Award. To learn more, visit www.southerncompany.com.