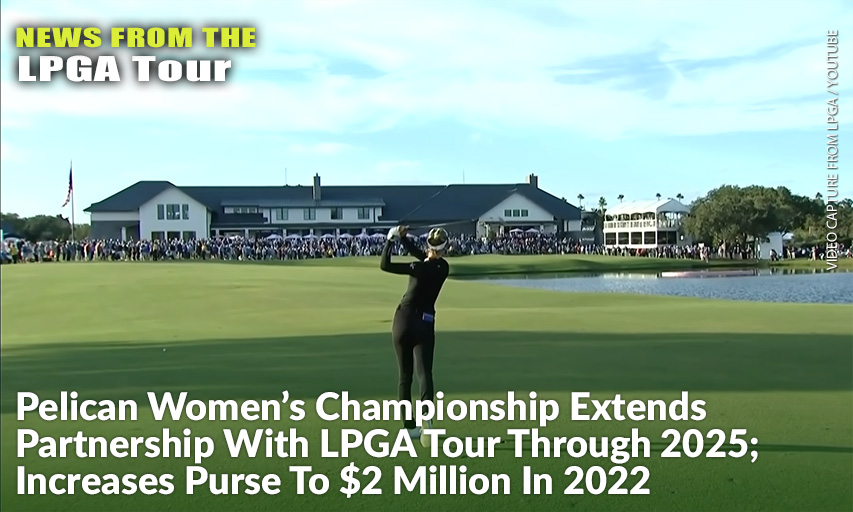 “We are excited to extend our partnership with the LPGA Tour in bringing the world’s best female professional golfers to Tampa Bay for the Pelican Women’s Championship,” said Dan Doyle Jr, Pelican Golf Club. “We are committed to providing a best-in-class experience for the players and fans alike, and we are thankful for the tremendous support from the Belleair community in helping to build this new championship as a premier event on the LPGA Tour.”

“We are honored to be working alongside the LPGA Tour, the Doyle family and Pelican Golf Club in elevating the stature of women’s golf through the Pelican Women’s Championship,” said Marci Doyle, executive director of the Pelican Women’s Championship. “The Doyle family is passionate about this great championship and giving back to the community, and we look forward to hosting the world’s greatest players at Pelican Golf Club for years to come.”

The Pelican Women’s Championship made its debut in 2020 without spectators and welcomed fans to Pelican Golf Club for the first time last week. World No. 1 Nelly Korda captured her seventh career LPGA Tour win via a one-hole playoff over Lexi Thompson, Lydia Ko and defending champion Sei Young Kim.

About the LPGA
The LPGA is the world’s leading professional golf organization for women, with a goal to change the face of golf by making the sport more accessible and inclusive.

Created in 1950 by 13 Founders, the Association celebrates a diverse and storied history. The LPGA Tour competes across the globe, reaching television audiences in more than 220 countries. The Symetra Tour, the LPGA’s official qualifying tour, consistently produces a pipeline of talent ready for the world stage. The LPGA also holds a joint-venture collaboration with the Ladies European Tour (LET), increasing playing opportunities for female golfers in Europe. Across the three Tours, the LPGA represents players in more than 60 countries.

Additionally, the LPGA Foundation has empowered and supported girls and women since 1991, most notably through LPGA*USGA Girls Golf, the only national program of its kind, which annually engages with nearly 100,000 girls. The LPGA Amateur Golf Association and LPGA Women’s Network provide virtual and in-person connections to female golfers around the world, while LPGA Professionals are educators, business leaders and game-changers dedicated to growing the game of golf for everyone. Follow the LPGA on its U.S. television home, Golf Channel, online at www.LPGA.com and on its mobile apps. Join the social conversation on Facebook, Twitter, Instagram and YouTube.