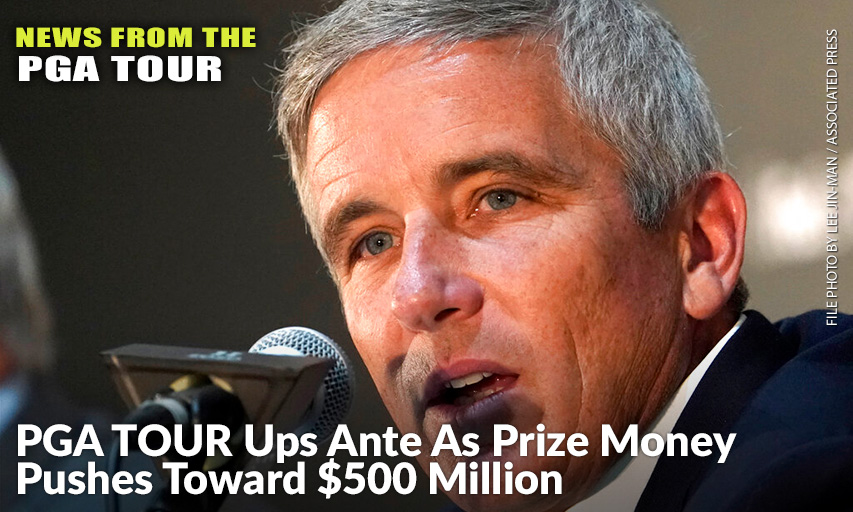 The PGA TOUR is raising purses even higher in five of its biggest events, with two FedEx Cup playoff events now offering $15 million in a schedule that pushes prize money closer to the $500 million mark this year.

The increases, which include $12 million purses in the three invitational tournaments, were approved at a board meeting and outlined in a memo PGA TOUR Commissioner Jay Monahan sent to players.

“We are positioned to grow faster in the next 10 years than we have at any point in our existence,” Monahan said in the memo, which was obtained by The Associated Press.

Monahan said the tour’s forecast is for 55% of revenue going back to the players in prize money, bonus programs and other benefits. The $838 million allocated to the players includes $32 million from the reserve fund.

The majors typically don’t announce their purses until closer to the event. A year ago, the richest major was the U.S. Open at $12.5 million. The PGA Championship purse was $12 million and the Masters and British Open awarded $11.5 million.

The memo was a year-end message that was delivered earlier than usual, in part because of an announcement earlier this month that a Greg Norman-led group funded by Saudi Arabia’s sovereign wealth fund plans to inject $200 million into the Asian Tour as a step toward creating a world tour promising guaranteed riches.

Monahan did not mention competing tours in his memo.

The tour already posted the 2021-22 schedule that showed most tournaments increasing prize money by nearly $1 million.

The updates approved by the board include the postseason events — the FedEx St. Jude Championship and the BMW Championship — going from $11.5 million to $15 million in prize money, meaning the winner would get $2.7 million. That’s a boost from a $9.5 million purse a year ago.

Also, prize money at the Genesis Invitational at Riviera, the Arnold Palmer Invitational at Bay Hill and the Memorial at Muirfield Village are going up to $12 million, compared with $10.5 million previously listed and $9.3 million a year ago.

The World Golf Championships-Dell Match Play also will have a $12 million purse.

The average purse on the PGA TOUR, not including the four opposite-field events, is roughly $9 million.

Along with prize money, the FedEx Cup bonus pool goes from $60 million to $75 million, with the winner getting $18 million. The Comcast Business Tour Top 10, which offers bonuses to the top finishers in the regular season, doubles its total bonus to $20 million.

The Player Impact Program, which awards the leading players based on various media metrics, goes from $40 million to $50 million.

The tour said $685 million from the $838 million allocated to the players would be player compensation, such as prize money and bonuses. The rest goes into retirement and benefits plans.

The increases come largely from the nine-year media rights deal (network and digital) worth roughly $7 billion that goes into effect in 2022.

“Over the past 20 months — as we have managed through the pandemic and restored our operating reserves — we have prioritized purse and comprehensive earnings growth across all FedEx Cup positions,” Monahan said in the memo, adding the tour was “bullish on the forecast” going forward.