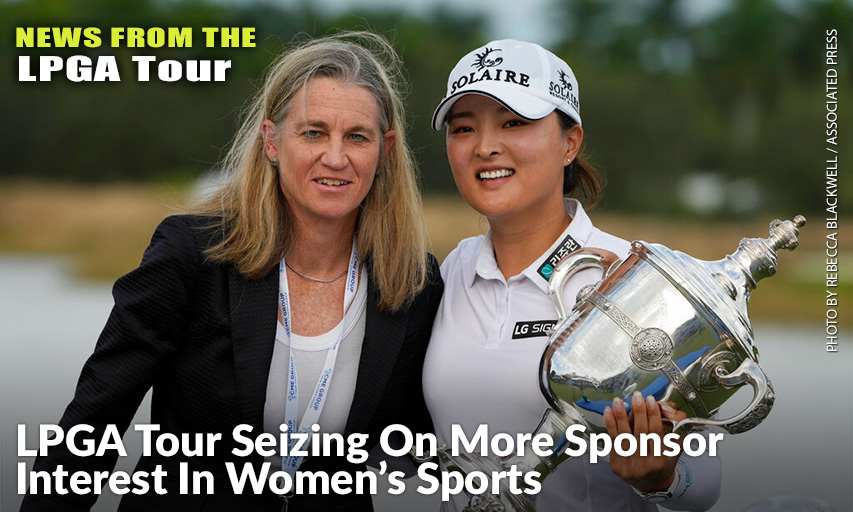 Ten years ago, the LPGA Tour had eight players earn at least $1 million in the season. One indication of how much has changed is Nasa Hataoka.

The 22-year-old from Japan earned more than $1 million from two runner-up finishes this year.

They came at events with the two biggest purses on the LPGA Tour, the U.S. Women’s Open and the CME Group Tour Championship. Even so, it was an example of how much stronger the purses are, and now the LPGA Tour heads into a 2022 season where prize money is pushing $90 million.

This is what Mollie Marcoux Samaan takes over as she begins her first full year as commissioner. She spoke about the LPGA Tour being positioned for growth and that “this is our time.”

“I think people have also had an awakening around women’s sports,” she said. “And they said, ‘Wow, this is an undervalued asset out in the world. We need to accentuate that value.’

“So I think generally, because of the world’s focus on diversity, equity and inclusion, I think people have looked at women’s sports and said, ‘That’s an area in the world that there’s not a great deal of parity or a great deal of equity.’”

The LPGA just completed its 72nd season, with 15 players earning $1 million or more.

Terry Duffy, the CEO and chairman of CME, has been among the biggest proponents by providing the largest first-place check, at $1.5 million. The CME Group Tour Championship has raised its purse by $2 million next year to $7 million, with $2 million going to the winner.

The LPGA Tour has 19 of its 34 official events with a purse of $2 million or higher, up from 15 such events five years ago.

The five majors have total prize money of at least $26.3 million, up from $18.7 million five years ago. Still to be determined is the U.S. Women’s Open, which has been looking for a presenting sponsor and could announce early next year a purse that will be the biggest in women’s golf.

It still has a big gap to close with the PGA TOUR, where already 16 players have earned $1 million or more in just nine fall events to start the new season.

“We’re constantly looking at all levels of the tour. How do our top players do, financially, how do the middle players do, how do the bottom players do? We look at pay equity,” Marcoux Samaan said. "We look at the deltas between the PGA TOUR and the LPGA Tour, and the delta gets bigger as you go down the money list.

“I think if we can close that delta, and also if we can make sure that the top players in the world can make a living commensurate with their talent, I think that is a real big goal of ours.”

Collin Morikawa has enjoyed a year worth celebrating. His three wins include a World Golf Championship, a second major at the British Open and his first European Tour win in the DP World Tour Championship to become the first American to win the Race to Dubai.

And the year is not over.

While the Hero World Challenge is an unofficial holiday event, world ranking points are at stake.

And for Morikawa, so is the No. 1 ranking.

According to projections by a world ranking specialist known on Twitter only as “Nosferatu,” Morikawa could reach No. 1 in the world if he were to win in the Bahamas. But not for long. With the formula involved, Jon Rahm would return to No. 1 a week later.

That would be OK with Morikawa. The 24-year-old Californian just wants to get there.

“I am definitely aware of that,” he said. “Hopefully we can get there, even if it’s just for that one week. I’m sure we’re still going to have many chances, hopefully, come next year.”

Morikawa said getting to No. 1 in the world has been a goal as long he can remember, and it’s not an opportunity he takes lightly when he considers only 24 players have been No. 1 since the ranking began in 1986.

“There’s been a lot of great players that haven’t and that just shows how tough it is,” he said.

END OF AN ERA

The CME Group Tour Championship was the end of the LPGA season, and it turned out to be a farewell of sorts on the broadcasting front.

Beth Hutter is stepping away from producing LPGA Tour coverage for the Golf Channel, wanting to spend more time at home with her young daughter.

Judy Rankin also says she's done with a full-time broadcast schedule. Rankin is a Hall of Fame player whose neighborly and authoritative voice has been a staple of LPGA events. She previously was at ABC and ESPN as a walking analyst during the peak years of Tiger Woods.

Fittingly, she was honored by Mollie Marcoux Samaan with the “Commissioner's Award,” which dates to 1991 as a way to honor those who have made unique contributions to the LPGA.

“I guess I’ve had the best front-row seat ever,” said Rankin, who turns 77 in February. ”The LPGA has been my neighborhood and I love this neighborhood. I’ve been really fortunate to have a second chance after being a player to spend so much time out here and to be friends with young players. It has really been extraordinary for me.”

The Sentry Tournament of Champions had a 42-man field to start the year because of a pandemic-shortened 2020 that led the PGA TOUR to extend qualifications to winners and anyone reaching the Tour Championship.

Now it’s back to winners only at Kapalua, and the field could be as large as 38 players.

While the deadline to enter is still more than a month away, Rory McIlroy and Phil Mickelson are the only ones not planning to be on Maui. McIlroy is starting his year in Abu Dhabi, while Mickelson (who hasn’t played Kapalua since 2002) has said his first stop would likely be The American Express in the California desert, where he is tournament host.

The European Tour now embarks on its new name — the DP World Tour — so it was only appropriate that the first announcement was that it will add a tournament in Japan to its schedule. It will be the 51st country to host a tour event.

The ISPS Handa Championship is set for April 21-24 at PGM Ishioka Golf Club in Omitama. It will be co-sanctioned with the Japan Golf Tour.

BMW has signed a five-year extension through 2027 as title sponsor of the only PGA TOUR postseason event that rotates. The BMW Championship will be at Wilmington Country Club in Delaware next year and return to Olympia Fields south of Chicago in 2023. ... Brooks Koepka, a free agent since Nike stopped making golf club, has signed a deal with Srixon. Koepka will be using the Srixon driver, irons and golf balls and play Cleveland wedges. He used the irons to win the Phoenix Open this year. ... The U.S. Amateur is going to Inverness in 2029. The club in Toledo, Ohio, most recently hosted the Solheim Cup this year.

Nasa Hataoka won $1.074 million for her runner-up finishes in the U.S. Women's Open and the CME Group Tour Championship. She won $645,000 for her two victories in the Marathon LPGA Classic and the Walmart NW Arkansas Championship.