One Rivalry Based On Performance, Another On Words 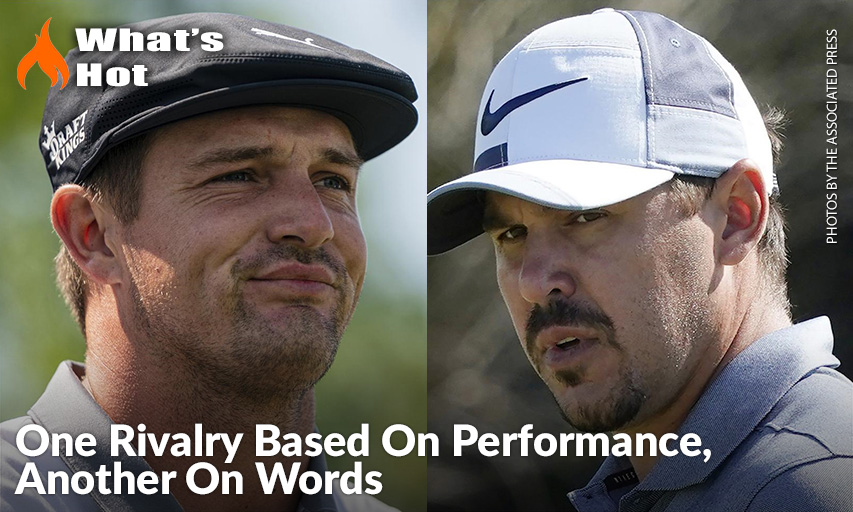 NAPLES, Florida — Golf loves a good rivalry, and right now there would seem to be something for everyone, depending on tastes.

One is based on performance and admiration.

“Honestly, it was the ‘Jin Young Ko Show’ today. It was really cool to witness,” Nelly Korda said after the South Korean star shot a tournament-best 63 from the final group on the last day of the season to beat her out for LPGA player of the year.

The other is rooted in petty arguments and trash talk.

“My first impression of him was he was always a little cocky, just a little like, ‘I’m too cool for this game.’ That was my first impression,” Bryson DeChambeau said when asked about Brooks Koepka. “And he’s kind of held up those standards so far.”

They will settle in Las Vegas in the latest iteration of “The Match,” a made-for-TV exhibition, this one over 12 holes.

“Eighteen holes with him is a long time,” Koepka said. “I don’t want to be around him as much anybody else.”

Ko and Korda could use another year like this one before their dominance of the LPGA Tour can really be called a rivalry. But it has all the ingredients, at least on the course.

They swapped places at No. 1 in the world over the last month, and the season ended with Korda at the top of the women’s ranking by the slimmest of margins. Both had a sub-69 scoring average — no one had done that on the LPGA Tour since Annika Sorenstam in 2002.

And while each won five times, the prizes for the 23-year-old American were a little glossier. One was an Olympic gold medal Korda keeps in a sock to prevent it from getting scratched. The other was from the Women’s PGA Championship, her first major.

Ko stole the show at the end.

“Nelly has great year — gold medal, win major tournament and three more wins,” Ko said. “Well, I feel a little sad for Nelly. I was a little luckier than her.”

The season-ending CME Group Tour Championship not only offered the richest prize in women’s golf at $1.5 million, it decided the LPGA’s most prestigious award between the best two players. Ko and Korda were part of a four-way tie for the lead going into the last round.

Ko had reason to withdraw after the first round due to an injury to her left wrist that had troubled her since May. She couldn’t practice early in the week. To avoid aggravating her wrist, she only took full swings with a wedge during her warmup on the range.

She not only shattered the tournament scoring record by five shots, Ko hit the final 63 greens in regulation, a staggering display of consistency.

“This is great for women’s golf and great for our tour,” Lydia Ko said of their battle.

What was great for men’s golf was seeing a video of Tiger Woods swinging a golf club again, nearly nine months after a car accident that shattered bones in his right leg. Never mind that it was only one wedge and the video lasted all of three seconds.

That might make 12 holes of the big match in Las Vegas feel like an eternity. But then, it’s good to at least get this out of the way.

“I think the whole word wants to see it,” said Koepka, presumably using a figure of speech since at least a small part of the world will be busy searching for Black Friday deals the day after Thanksgiving.

Koepka and DeChambeau’s dislike for each apparently goes back to the first time they played together in the final round of the 2016 Masters.

It became public at Liberty National in 2019 at the start of the PGA TOUR postseason.

Koepka had been vocal about slow play, and it was clear DeChambeau — who was glacial — was the target. So when DeChambeau saw Koepka’s caddie talking to two reporters on the practice green, he walked over and told Ricky Elliott to tell his boss that if Koepka had any problems he could always go straight to him.

“You can tell him that,” Elliott replied, and sure enough, that’s how it unfolded a short time later. And that supposedly was the end of it.

But then DeChambeau was doing a live streaming video game on Twitch when he was overheard making fun of Koepka by saying “he didn’t have any abs” in ESPN’s “Body Issue” magazine.

In Koepka’s mind, it was game on. And on it went.

There was the leaked video of Koepka rolling his eyes as DeChambeau walked behind him at the PGA Championship. Fans began shouting “Brooksie” at DeChambeau.

Both stand to make money off this silly social media dispute, and there remains no small measure of skepticism that it’s all staged as part of the hype Las Vegas loves.

The PGA TOUR is offering a $40 million bonus pool for a “Player Impact Program” that is measured by various metrics, and DeChambeau suspects that’s what has been driving Koepka.

“It’s disgusting the way the guy has tried to knock me down," DeChambeau said. "There’s no need for it in the game of golf. For what reason? I don’t know. Maybe he’s jealous and wants to get part of that PIP money from the tour.”

Koepka figures he’s already 1 up in talking smack. DeChambeau looks forward to a chance at “kicking his butt.”

One can only hope that what happens in Las Vegas really does stay there.