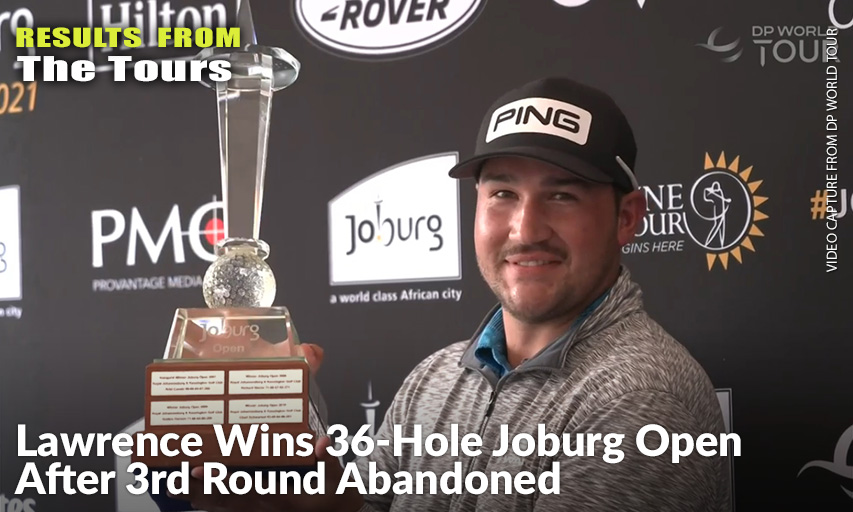 JOHANNESBURG (AP) — South African golfer Thriston Lawrence won the Joburg Open after the third round was abandoned because of bad weather, meaning the result was called after 36 holes of the inaugural event on the DP World Tour.

The event had been reduced to a 54-hole tournament to help non-South African resident players, caddies and support staff at the tournament return to their home countries, a move triggered by international travel restrictions being imposed on South Africa because of the emergence of a new COVID-19 variant in the country.

Lawrence had a four-shot lead at the end of the second round, having shot 65-65 to be on 12 under par overall. He claimed his first win on what was formerly named the European Tour, earning the No. 503-ranked player full membership.

“It’s so surreal,” Lawrence said. “I don’t think anyone thought it would turn out this way, to finish on a Saturday afternoon, but I’m just really thankful. It’s a life-changing moment for me. It’s an unbelievable feeling.”

Play was suspended at 1012 GMT on Saturday — with Lawrence having just started his third round — due to heavy rain and the threat of lightning. Organizers said large parts of the course were unplayable, leaving officials with little option but to abandon the day’s play.

Lawrence had even more reason to celebrate because a first-place finish secured him a place in next year’s British Open at St. Andrews, along with the players in second and third place — fellow South African Zander Lombard (8 under overall) and England’s Ashley Chesters (7 under). Chesters was tied for 7 under with Shaun Norris, who had already earned an exemption into the British Open.

“It’s a lifelong dream,” Lawrence said of getting into the British Open, “and now it’s come true. I’ve never played a major, and to play your first ever major at St Andrews is an unbelievable achievement for me and I can’t wait, I’m so excited.

“It’s a bit blurry for me at the moment,” he continued. “I would have liked to have taken it down No. 18 today and celebrate a winning putt but it’s a lifelong dream not just to play in a major, but to win a DP World Tour event.”

Other sporting events in southern Africa have been impacted by the emergence of the new variant.

The qualifying event for the 2022 Women’s Cricket World Cup taking place in Zimbabwe was abandoned, while the final two matches of South Africa’s three-match ODI series against the Netherlands were cancelled.

Cricket South Africa said the decision was made “as a result of mounting anxiety and concern” from the tourists about the traveling situation.