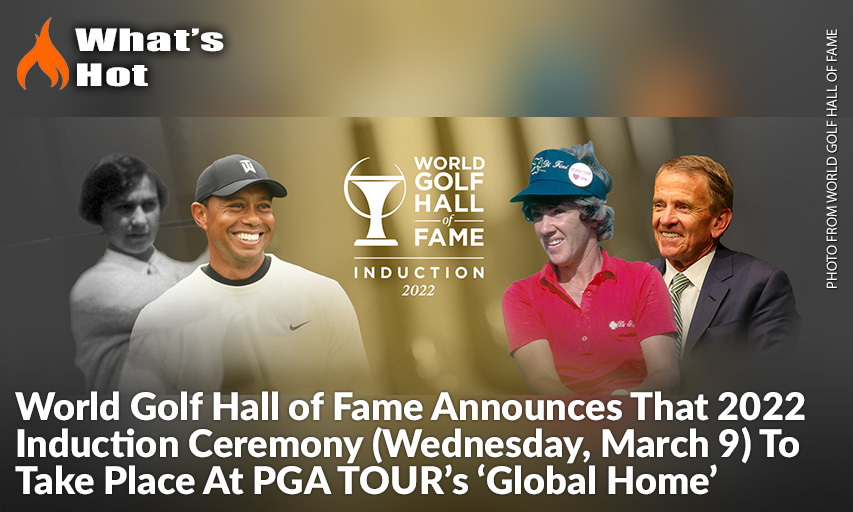 PONTE VEDRA BEACH, Florida — The World Golf Hall of Fame and the PGA TOUR announced that the 2022 induction ceremony – honoring the newest class of Hall of Fame members – will be staged at the PGA TOUR’s ‘Global Home’ corporate headquarters in Ponte Vedra Beach, Florida. Taking place during THE PLAYERS Championship, the induction ceremony will air live on Golf Channel on Wednesday, March 9 at 7 p.m. ET.

“We are excited to conduct the Hall of Fame’s 2022 induction ceremony in partnership with the PGA TOUR at their new Global Home,” said Greg McLaughlin, CEO, World Golf Hall of Fame. “It will serve as an exciting venue for a historic evening among those in attendance, as well as those tuning in from around the world on the eve of THE PLAYERS Championship.”

The induction ceremony in March will center around the newest Hall of Fame class: competitors Susie Maxwell Berning and Tiger Woods, along with contributors Tim Finchem and the late Marion Hollins.

On Saturday (Dec. 4), the Hall of Fame will unveil a new exhibit dedicated to celebrating the 2022 class. On display will be personal items and artifacts from the new inductees, including trophies and memorabilia collected during their respective careers. The addition of these four individuals will bring the total number of Hall of Fame members to 164.

In addition to honoring the four newest Hall of Fame members, the induction ceremony in March also will recognize Dick Ferris and Peter Ueberroth, as recipients of a newly created lifetime achievement award for their contributions to the sport. Additionally, Renee Powell will be honored for her spirit in advancing diversity in golf, as the inaugural recipient of the Charlie Sifford Award presented by Southern Company.

About the World Golf Hall of Fame
The World Golf Hall of Fame celebrates and honors the legacies of those who have made golf great. The Hall of Fame opened in 1974 in Pinehurst, North Carolina, where 71 members were inducted prior to the transition (in 1998) to its current Florida location, which now recognizes 160 total members. As a 501(c)(3) nonprofit organization, the Hall of Fame partners with 26 national and international golf organizations, including the European Tour, LPGA, the Masters Tournament, PGA of America, PGA TOUR, The R&A and USGA. To learn more, visit www.worldgolfhalloffame.org.

Fans can follow the PGA TOUR on PGATOUR.COM, the No. 1 site in golf, on the PGA TOUR app and on social media channels, including Facebook, Instagram (in English, Spanish and Korean), LinkedIn, Twitter, WeChat, Weibo, Toutiao, Douyin and LINE.