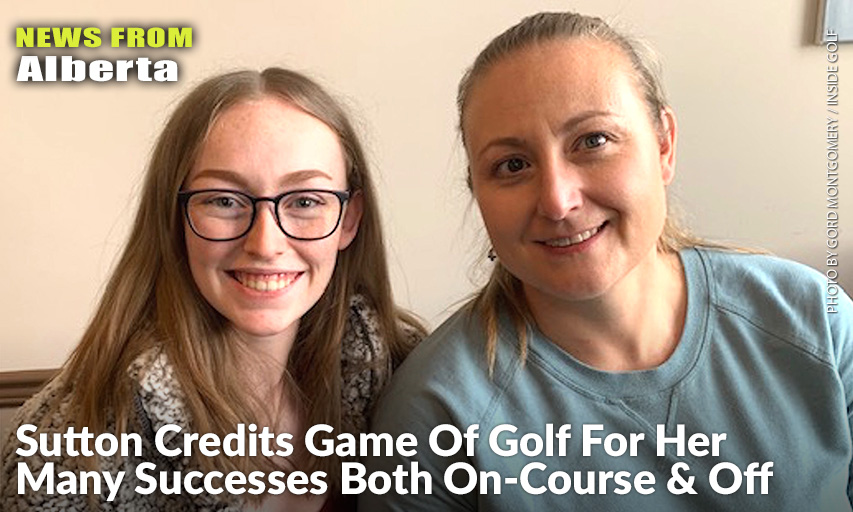 SPRUCE GROVE, Alberta — If parents need a female role model in the world of golf who is just an ‘ordinary’ citizen, then they needn’t look much farther than Spruce Grove’s D’arci Sutton. You see, this young lady is not only a strong player, she’s also a major force in other parts of her life, including education and volunteer work.

Sutton explained that she first picked up a golf club at the tender age of four. Even though she explored all the other sporting avenues available to her including hockey, softball, soccer and so on, she fell in love with the game of golf. And as it turns out, that love earned her a lifelong love affair with the game and an ongoing friendship with her first and only coach, Jil Swenson.

“Golf was the one sport that stuck with me and it mainly has to do with Jil. She was one of the instructors (in the Junior-Junior program) at the Stony Plain Golf Course. I bonded with her right away and I kept going back. All the other sports quickly fell away — I just had a passion for golf,” Sutton explained about her early embrace of the game and her mentor. 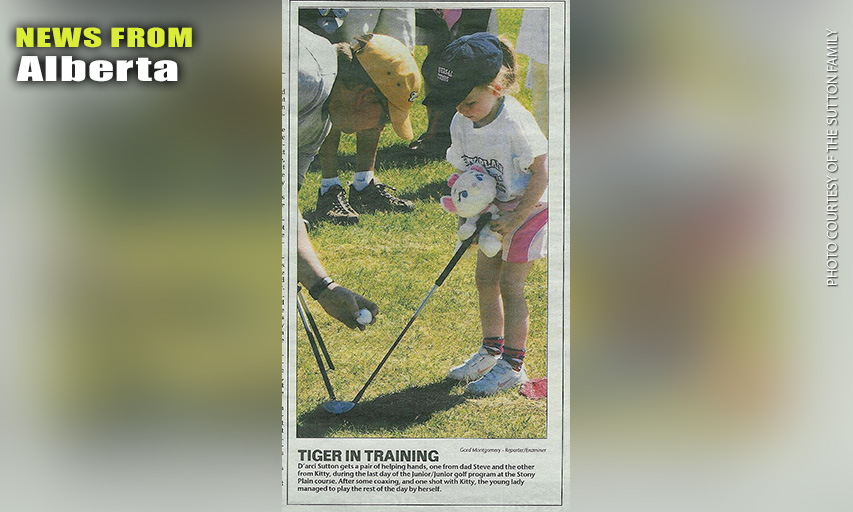 Even With A Security Bear Attached To Her Waist, D’arci Sutton Was All About Learning The Game Of Golf At A Tender Age, As She Took Part In The Stony Plain Golf Course’s Junior/Junior Program In 2006.

Over the years hundreds upon hundreds of kids, aged four and up have taken part in that learn-to-play program in Stony Plain. Swenson, a PGA of Alberta golf pro, said almost from the get-go, her protégé caught her eye.

“I kind of gravitated to the girls and D’arci had the attention span, even at four, to focus on what I was telling her and be able to replicate it. She picked up on things super-fast. And, we had fun doing it! She wasn’t fighting the sport like some kids do; she just embraced it.” 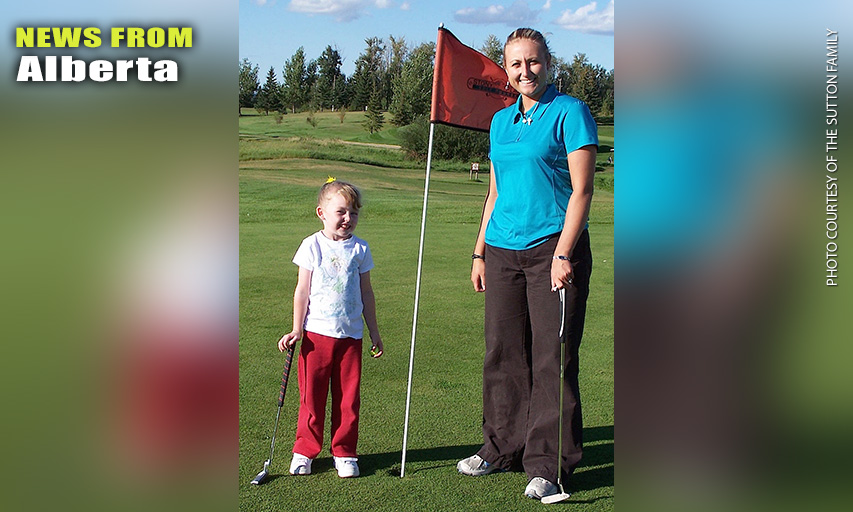 A Year Later, While Still A Bit On The Small Side, Sutton & Swenson Began Sharpening The Youngster’s Short Game Skills On The Putting Green.

“Transitioning into the competitive world was quite exciting when I first did it,” Sutton noted. “Suddenly, I had more than just my own passion for the game; I had a purpose. I wanted to meet new people and be able to play to their level.” Needless to say, she accomplished that quite handily.

As this interview continued, Sutton pointed out that she’s “always embraced challenges,” including presently learning to play the violin (she is also an accomplished musician) and that desire shows in her everyday life. She’s not only excelling in her university studies, she’s a dedicated volunteer for Diabetes Canada. As well, she herself is now mentoring young girls in golf, passing along her love for the game. In regard to her sporting success, Sutton kept her schoolwork on an even plane. She is now a Sciences major at the University of Alberta where she’s earned recognition as being in the top 1.5 – 2 percent of her class and as such made the Dean’s List in the Faculty of Arts from 2019 to 2021. During her post-secondary career, Sutton has garnered 10 different scholarship awards, including the Alberta Golf Association Foundation Scholarship in 2019 which recognizes a student for demonstrating commitment to the game of golf. 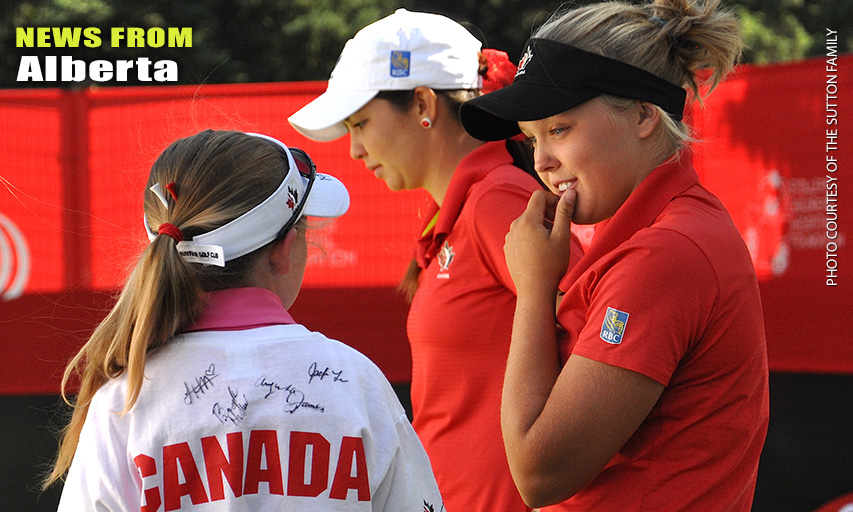 It Never Hurts To Get Some Great Advice From A Decent Player, So Here, D’arci Sutton Chats Up Brooke Henderson At The CP Women’s Open.

Then of course, there’s the volunteer work she’s involved in. Again, the stats on this are Tiger-worthy, to say the least. That all starts with her work with the Canadian Diabetes Association. She’s an 11 year volunteer with that organization and in 2020 she was recognized as a Banting Best fundraiser for the Lace up for Diabetes campaign. Over the last decade she’s funded a number of kids so they could attend Diabetes Camp, as well as raised enough money to fund a research lab for a full day. On top of that, she moderates quarterly educational information seminars for Diabetes Canada. Then, in 2021 she began an annual Family and Friends Walk to raise awareness for diabetes. She has participated in the Lace up for Diabetes campaign, as a Cause Champion, raising $2,335 from August to September 2021. And then in the fall of 2021, the City of Spruce Grove, her hometown, paid tribute to Sutton by awarding her with their highest civilian honour, an Award of Excellence for Significant Achievement

Needless to say, one has to wonder how anyone has the time to do all Sutton does on an on-going basis. To that, she suggests it’s a matter of motivation and realization how golf set her up for life.

“Golf taught me a lot of things that I apply to life in general. It taught me how to meet a challenge and rise to it. It taught me perseverance. Life doesn’t always go the way you want. It taught me hard work, focus, and dedication to put in the hours to get where you want to be. It set me up for success in all realms of life.” 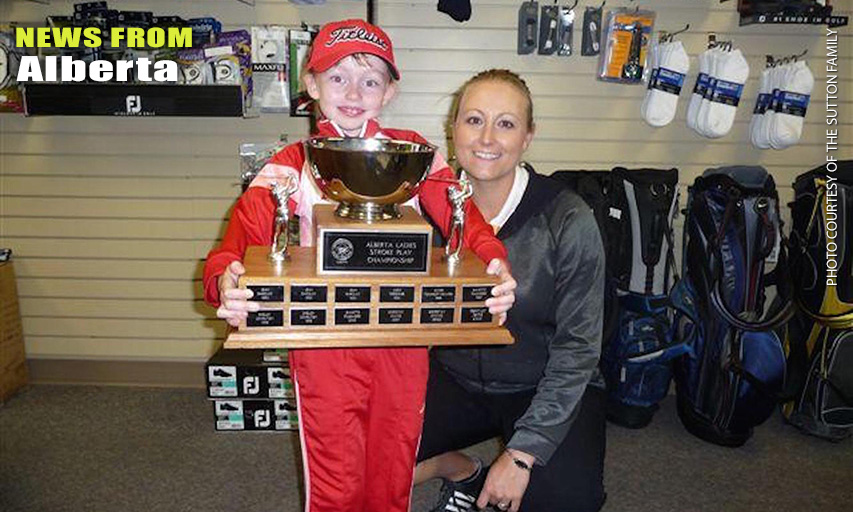 With A Trophy Almost As Large As She Was, D’arci Sutton Showed She Had Lots Of Talent For The Game Even At An Early Age.

From all she’s learned, plotting her life course from here on appears to be set. “I do want to get involved in the field of health care. Right now, I’m looking at getting into research. This year I started volunteering in the diabetes lab at the U of A,” and as such, she’s presently the only undergrad in that laboratory setting. “Research is what’s going to drive the cure. Research may not always be the main focal point when you think medicine, but it is certainly an important aspect of the medical field. We’ll see where everything takes me.”

And of course the world of golf won’t be leaving her side anytime soon even though her participation has been slowed a bit by her schooling. “I’m always gonna play golf, certainly. I think when I’m done school, I’d like to get more involved in (women’s) amateur play, see where that takes me.” As to continuing her golf mentoring, she noted, “I wanted to give back to the game because the game gave so much to me. It taught me a lot of valuable lessons. I wanted to give back so I started mentoring. Without the youth in the game, it’s going to die. Youth is so important to the game and it’s important to pass on the love of the game.”

Queried about her student/friend’s sterling résumé and the community leadership skills she’s already displaying, Swenson smiled broadly noting, “Her parents had a lot to do with that, the way they raised her. Her integrity and drive. I’m just along for the ride! I’m lucky enough to have been brought along by her over the years. I’ve helped where i could. I’m just amazed at the curly haired little girl I met at four, almost finished university, and flourishing at everything.”

And by the looks of her past, the future looks nothing but bright for this young lady who found a sport she credits for the many, many successes she’s already had and for the many more that are sure to follow.