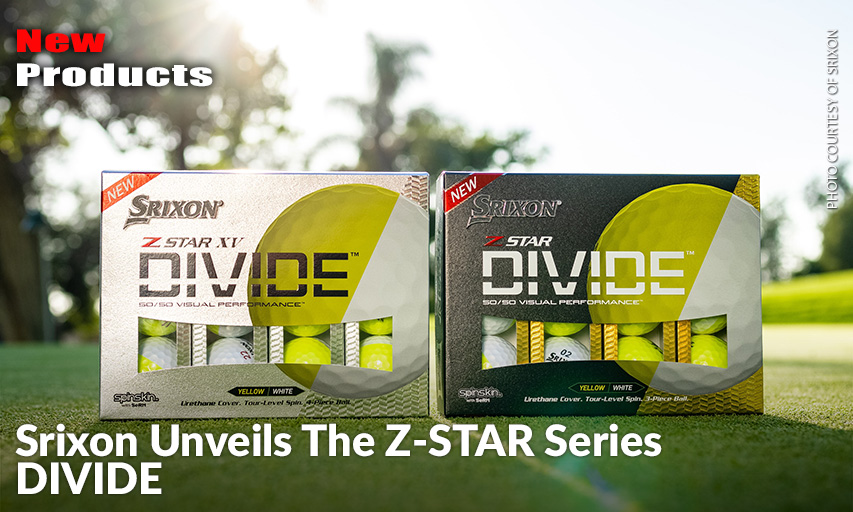 HUNTINGTON BEACH, California — SRIXON®, a global leader in golf ball technology and innovation, announces the launch of the Z-STAR Series DIVIDE. The Srixon Z-STAR and Z-STAR XV DIVIDE golf balls are available in a Yellow/White colorway, and officially launch in North America.

“We are thrilled to be launching Z-STAR DIVIDE and Z-STAR XV DIVIDE,” said Brian Schielke, General Manager of Srixon North America. “While they certainly stand out on the course, the performance benefits are what excite us the most. They’re so easy to align your putts, see flying through the air, and give great visual feedback on pitches and chips around the green.”

The Z-STAR Series DIVIDE combines Srixon’s 50/50 Visual Performance with our tour-level golf balls to offer a new ball that stands out on the course. With the new colorway on the Z-STAR and Z-STAR XV DIVIDE, putting alignment becomes simple and players of all skill levels can track their spin, especially around the greens.

These golf balls feature Srixon’s SpinSkin with SeRM, a durable coating on the thermoplastic urethane cover that digs deep into wedge and iron grooves at impact for optimal spin and control. Meanwhile, the FastLayer Core and 338 Speed Dimple Pattern work in tandem to produce exceptional distance and feel.

While it might look different, the Z-STAR and Z-STAR XV DIVIDE delivers the same standout performance that many golfers have come to expect from the classic Z-STAR Series golf balls.

“The Q-STAR TOUR DIVIDE launch exceeded all expectations and bringing this same technology to the Z-STAR Series family will help get the DIVIDE technology in more golfer’s hands,” Schielke said.