Korda Sisters Both Feel Like Defending Champs As LPGA Begins 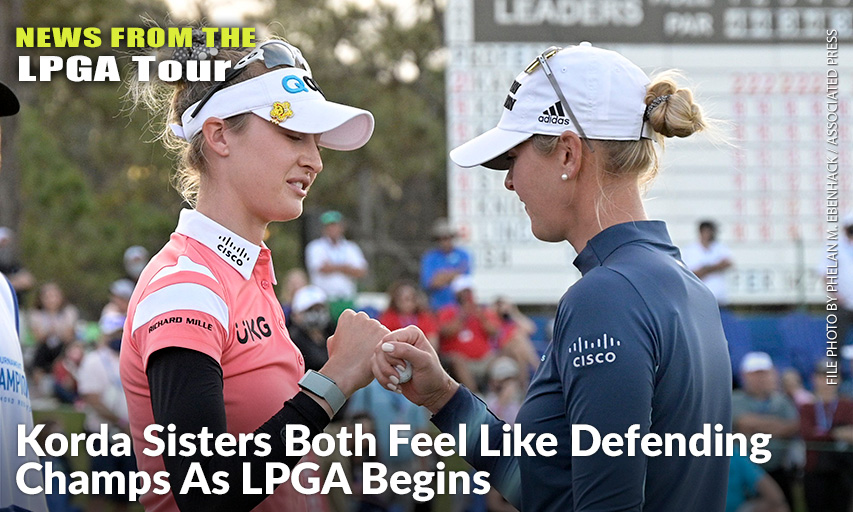 ORLANDO, Florida — The 2022 LPGA season gets underway with a new sponsor, a new venue, significant purse increases and most of the stars who put a big spark into 2021.

The Hilton Grand Vacations Tournament of Champions at Lake Nona also starts with one question: Which Korda sister feels like the defending champion?

Jessica Korda won the Tournament of Champions last year when it was held 20 minutes west of town at Tranquilo Golf Course. She shot 60 in the third round and wound up beating Danielle Kang in a playoff for her first victory since 2018.

The next week, younger sister Nelly Korda won at Lake Nona to capture the Gainbridge LPGA (which moves back to South Florida next week).

Jessica Korda said she hasn’t had the opportunity to defend several of her six LPGA titles on the same golf course a year later. She is used to transition.

At least for now, she’ll gladly place Nelly on the hot seat.

“I told my sister she’s defending this week,” 28-year-old Jessica said, laughing at the thought. “I was like, ‘This is where you won.’ I think I played fine here last time (tie for 31st), so hopefully with kind of my learning experience from then, I can do something with it this week.

“It’s the first week of the year. First tournament of the year," she said. "It’s kind of a free-for-all, so we’ll see.”

The season opener is a 29-player field of LPGA winners from the past three seasons, competing alongside 50 entertainers and athletes from other sports who will vie for their own separate purse of $500,000.

Also playing this week is Michelle Wie West, the former U.S. Women’s Open champion. Wie West last won in 2018 but did not play in this tournament last January because she was on maternity leave. She was invited to play this week and is making her first start since the KPMG PGA Championship in June.

Attracting a big part of the attention are the Korda sisters.

Their parents, Petr and Regina Korda, were tennis professionals, not golf pros, but still imparted some wise words on the subject of competition. One lesson they taught their golf-playing daughters was this: When you have a great season, enjoy it. Appreciate it. And surely both daughters had seasons to savor in 2021.

Nelly Korda, 23, won four LPGA titles, among them her first major championship. On the hot June afternoon in Atlanta when she won the Women’s PGA Championship, she also rose to No. 1 in the world, fulfilling two dreams on the same day. For good measure, she added an Olympic gold medal in Japan.

She did just about everything but garner player-of-the-year honors, a points-based award that came down to the final round of the year. Jin Young Ko won the CME Group Tour Championship and was LPGA player of the year.

Ko, No. 2 in the women's world ranking, is not competing this week.

Nelly Korda has held down the No. 1 spot in women’s golf for 28 weeks, longer than any American woman had done previously.

“It’s super special,” she said. “Obviously, that’s a very big goal that I can kind of check off my list as a professional golfer. I’m hungrier for more, but in a sense of just focusing on that No. 1 spot, I’m not too focused on that. I mean, rankings come and go. ... But to have it for just a little feels really good.”

The field features six of the top 10 players in the world, and the purse was bumped 25% to $1.5 million. Several LPGA events have announced purse increases for 2022, the biggest being the U.S. Women’s Open, which nearly doubled its purse from $5.5 million to $10 million. The LPGA will play for more than $90 million this season.

Annika Sorenstam, an LPGA Hall of Famer and Lake Nona member, is part of the celebrity field this week. A year ago at Lake Nona, when it was the Gainbridge LPGA, she played her first LPGA event in 13 years and made the cut at age 50.