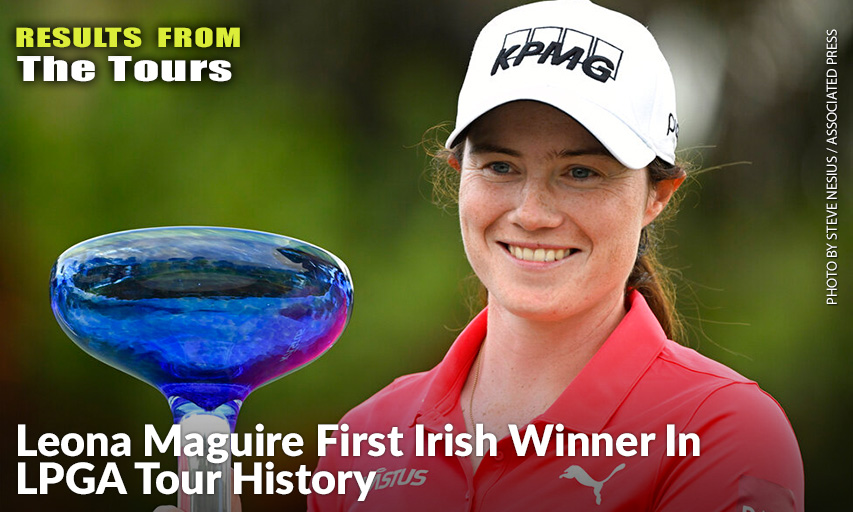 FORT MYERS, Florida (AP) — Leona Maguire became the first Irish winner in LPGA Tour history, closing with a 5-under 67 for a three-stroke victory in the LPGA Drive On Championship at Crown Colony.

“It’s huge for Irish golf,” Maguire said. “There was never an Irish player on the tour, let alone a winner. Hopefully, there is a lot of people watching at home tonight with big smiles on their faces and little girls watching knowing they can do that, too.”

Tied with Marina Alex for the second-round lead after a 65, Maguire had seven birdies and two bogeys — the last on the par-5 18th with the outcome decided. The 27-year-old former Duke star finished at 18-under 198.

“It’s a bit surreal,” Maguire said. It’s been 17 years in the making, and you kind of wonder if it’s ever going to happen. Just really proud of how I played all week, especially today. Dermot (Byrne) was incredible on the bag. ... Probably more relief now than anything else.”

Lexi Thompson was second after a 65.

“I played with Leona the first two days and she’s been hitting it amazing,” Thompson said. “I knew I had to make birdies to get even closer. ... She obviously played great again today and definitely well deserved. I think it will help her out a lot. She’s an amazing talent.”

Maguire had an early birdie and a bogey, then ran off five birdies in a seven-hole stretch from the seventh to the 13th. She also birdied the par-4 16th. Her closing bogey left her 1 over for the day on the four par-5 holes.

“I knew my game was close,” Maguire said. “I did a lot of hard work in the offseason.”

“Leona had a great day.” Alex said. “It was really awesome to watch her play. She really got into a groove there kind of like middle of the front and into that back nine, made a ton of birdies. So just had a push to try and keep up with her. Didn’t really work out, but that’s OK.”