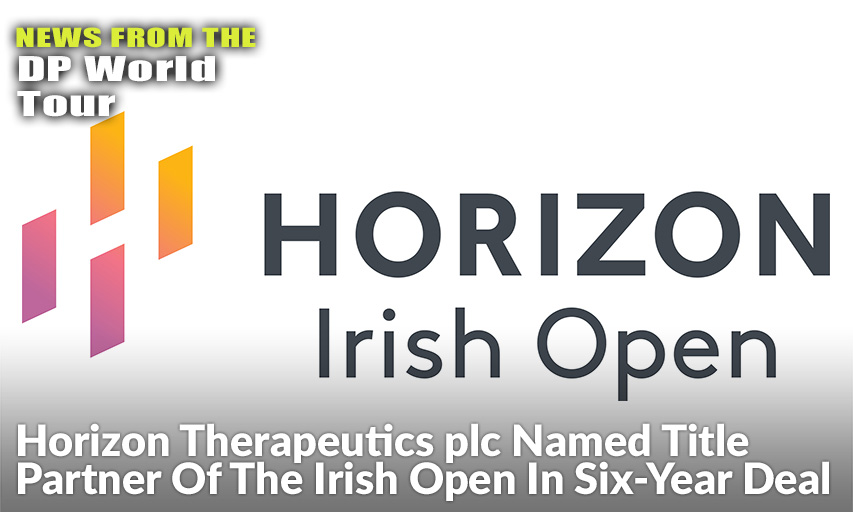 DUBLIN, Ireland — Horizon Therapeutics plc (Nasdaq: HZNP) announced it has been named the Title Partner of the Irish Open in a six-year deal, which will begin with the 2022 Horizon Irish Open at Mount Juliet Estate in County Kilkenny, Ireland, from June 30 to July 3.

“Horizon has called Ireland home for nearly ten years and this partnership with the DP World Tour further solidifies our continued economic and community commitment,” said Tim Walbert, chairman, president and chief executive officer, Horizon. “In addition to developing medicines, philanthropy is at our core. We have forged meaningful relationships in Ireland and know that serving as the Title Partner of this historic tournament will serve as a platform to positively impact the Irish and global community.”

“We are thrilled to welcome Horizon as the new Title Partner of the Irish Open,” said Guy Kinnings, deputy chief executive officer and chief commercial officer of the European Tour group. “It is a tournament which always holds a special place in the global golfing calendar thanks to its history, the world-renowned Irish fans and of course the many world-class players the island has produced. It is a sign of Horizon’s commitment to golf on the island of Ireland that they have committed until at least 2027 and we very much look forward to working with them. This agreement is just the latest example how the Strategic Alliance with the PGA TOUR continues to benefit our membership.”

Last year, Horizon entered into a multi-year partnership agreement with three-time major champion Padraig Harrington. As part of that agreement, Mr. Harrington will wear the Horizon logo on his shirts, sweaters and outerwear during tournaments, and in conjunction with the Padraig Harrington Charitable Foundation partner with the company on philanthropic programs.

“The Irish Open has special meaning for me, and I am appreciative of Horizon’s continued support to me as a golfer, the Irish Open and the Irish community overall,” said Padraig Harrington, 2007 Irish Open champion. “We share similar philanthropic approaches and some community partners, and I am excited to continue to explore charitable endeavors together.”

Horizon’s global headquarters are in Dublin and the company recently opened a new 62,000 square foot headquarters facility at 70 St. Stephen's Green. In 2021, the company purchased a 44,000 square foot manufacturing facility in Waterford, Ireland to support the growth of its on-market rare disease medicines and pipeline biologics. During the last two years, Horizon has provided approximately €1,000,000 in community support including €123,000 in scholarships to help economically disadvantaged students from Trinity College Dublin and Waterford Institute of Technology cover their non-tuition expenses.

About Horizon
Horizon is focused on the discovery, development and commercialization of medicines that address critical needs for people impacted by rare, autoimmune and severe inflammatory diseases. Our pipeline is purposeful: We apply scientific expertise and courage to bring clinically meaningful therapies to patients. We believe science and compassion must work together to transform lives. For more information on how we go to incredible lengths to impact lives, visit www.horizontherapeutics.com and follow us on Twitter, LinkedIn, Instagram and Facebook.

About the DP World Tour
The DP World Tour is the main men’s professional golf Tour of the European Tour group, with a global schedule featuring a minimum of 45 tournaments in 25 different countries across the 2022 season.

Formerly known as the European Tour, which was established in 1972, the 2022 DP World Tour schedule includes five Rolex Series events, along with four Major Championships, two World Golf Championship events and three tournaments co-sanctioned with the PGA TOUR, as well as tournaments staged around the world with a minimum prize of $2 million for all events solely sanctioned by the DP World Tour.

DP World, the leading provider of global smart end-to-end supply chain and logistics solutions, is the title partner of the DP World Tour, which is administered by the European Tour group.

Established in 1972, the European Tour group is committed to ‘Driving Golf Further’ through our guiding principles of being innovative, inclusive and global.

Innovative: We are driving innovation in golf through the creation of award-winning content, pioneering tournament formats and the use of the latest technology and inventive fan engagement. We are committed to attracting new audiences whilst respecting the tradition of our sport.

Inclusive: We are committed to include all who share a love for the game of golf. We are passionate about a closer collaboration with the women’s game, disability golf and promoting the many physical and mental health benefits of playing golf.

Global: Since 1972, players from 37 different countries have won tournaments on our main Tour, while our live broadcast reaches more than 490 million homes in more than 150 countries every week, generating in excess of 2,200 global broadcast hours for each event. We also enjoy the support of many of the world’s leading business brands with DP World, Rolex, BMW, Callaway, Emirates, Fortinet, Workday and Zoom as Official Partners.

The European Tour group has Strategic Alliances with the PGA TOUR, the Sunshine Tour, and the ISPS Handa PGA Tour of Australasia, while we also drive positive community impact through our overarching CSR programme, Golf for Good.