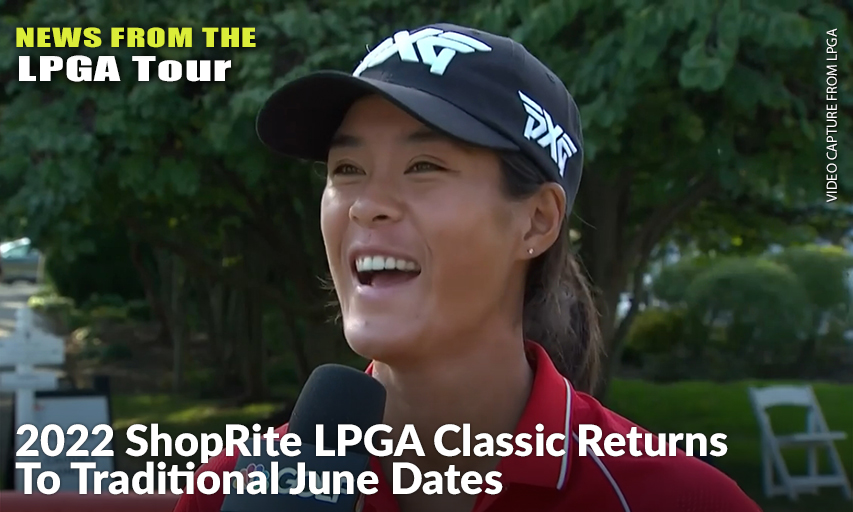 GALLOWAY, New Jersey — Tournament officials announced the 2022 ShopRite LPGA Classic Presented by Acer will return to its traditional dates on the LPGA Tour tournament schedule, taking place June 6-12 at the Bay Course at Seaview, A Dolce Hotel in Galloway, N.J.

“We are excited to return to our traditional dates for the 2022 ShopRite LPGA Classic Presented by Acer that will serve as Atlantic City’s annual kickoff sporting event for the summer,” said Bill Hansen, tournament director for the ShopRite LPGA Classic. “We look forward to showcasing this great championship and its world-class field to the LPGA Tour’s global audience via our television partners at GOLF Channel and CBS Sports.”

"We are so proud of ShopRite's long partnership with the LPGA and it's fitting that we announce the dates for this year's tournament as we also kick off Women's History Month. The annual ShopRite LPGA Classic Presented by Acer features the world’s best female golfers while also raising money for dozens of community-based charities, food banks and health care organizations that help so many people in need. ShopRite is always honored to be part of an event that creates victories both on and off the course," said Joseph Colalillo, Chairman and CEO of Wakefern Food Corp.

Ticket packages for the 2022 ShopRite LPGA Classic include exclusive hospitality and general admissions tickets offering a wide degree of entertainment and access. All 2022 tournament tickets will be digital and will be emailed after purchase. Tickets can be viewed on either a mobile device or be printed out where they will be scanned at the main gate.

There are four ticket options for fans interested in attending the 2022 ShopRite LPGA Classic, which can be purchased in advance online.

For three decades, golf fans from across the northeast have converged upon Atlantic City and the Jersey Shore to watch the top female golfers in the world compete on the famed waterfront course. The tournament not only hosts one of the strongest fields in women’s golf, but it also annually creates more than $19 million in economic activity in the region.

Since 1992, nearly $40 million has been donated to area hospitals, food banks, education and youth programs. At the 2021 ShopRite LPGA Classic Presented by Acer, dozens of nonprofits received grants and donations totaling more than $1.5 million during a luncheon hosted by Wakefern Food Corp., the logistics, merchandising and distribution arm for ShopRite stores.

The 2021 ShopRite LPGA Classic, which took place in October and welcomed fans back to the championship, was won by Celine Boutier, who recorded the second LPGA Tour title of her career. Boutier matched her career-low score on Sunday’s final-round with a 63 to reach 14-under par, holding off Jin Young Ko, Inbee Park and a charging Brooke Henderson.

To date, ShopRite has donated nearly $40 million to charities through its association with the LPGA. The event is owned and operated by Outlyr, a global sports marketing and event management agency. In addition to managing 12 professional golf tournaments, Outlyr also operates a number of other sporting and lifestyle events and manages the sponsorship portfolio for several blue-chip clients. Visit www.ShopRiteLPGAClassic.com for more information.

About the LPGA
The LPGA is the world’s leading professional golf organization for women, with a goal to change the face of golf by making the sport more accessible and inclusive.

Created in 1950 by 13 Founders, the Association celebrates a diverse and storied history. The LPGA Tour competes across the globe, reaching television audiences in more than 220 countries. The Epson Tour, the LPGA’s official qualifying tour, consistently produces a pipeline of talent ready for the world stage. The LPGA also holds a joint-venture collaboration with the Ladies European Tour (LET), increasing playing opportunities for female golfers in Europe. Across the three Tours, the LPGA represents players in more than 60 countries.

Additionally, the LPGA Foundation has empowered and supported girls and women since 1991, most notably through LPGA*USGA Girls Golf, the only national program of its kind, which annually engages with nearly 100,000 girls. The LPGA Amateur Golf Association and LPGA Women’s Network provide virtual and in-person connections to female golfers around the world, while LPGA Professionals are educators, business leaders and gamechangers dedicated to growing the game of golf for everyone.