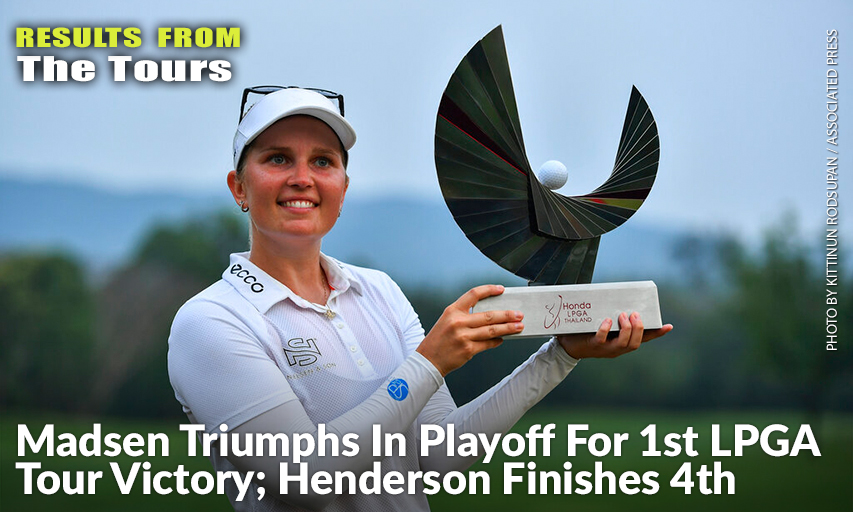 Both players set a new tournament record of 26-under-par 262 in regulation, and then birdied the par-5 18th in the first extra hole before the Dane sealed the win with a 7-foot eagle putt in the next to secure her biggest career victory.

“It’s amazing. I don’t know how to put it into words," said Madsen. "It’s something I’ve dreamed of for a very long time.”

The 27-year-old Madsen, who shot a final-round 5-under 67, also became the third European to win the event after Suzann Pettersen of Norway in 2007 and Anna Nordqvist of Sweden in 2014.

Celine Boutier of France finished a shot behind the leaders in third after a final-round 67. Three-time champion Amy Yang (64) of South Korea and Canadian Brooke Henderson (67) finished another two shots back.

Henderson of Smiths Falls, Ont., had six birdies and one bogey on the day. She sank back-to-back birdies on the course's final two holes. The 24-year-old closed with a round of 67 after rounds of 65, 67 and 66.

Madsen had started her final round at the Siam Country Club Old Course at Pattaya the way she ended her third. Even better, actually, on the way to her first LPGA Tour victory.

And she needed every one of those early breaks to put herself in a position to secure the win.

After making birdie on her final two holes in the third round to take a one-stroke lead into [the final round], the two-time Olympian from Denmark eagled her first hole and birdied the second to increase her lead. After a bogey on the seventh, she came back with birdies on the eighth and ninth for a three-stroke lead at the turn.

Then, after rain suspended play for two-and-a-half hours, the Dane blew a four-stroke lead with three holes to go.

Madsen still had a two-shot lead going to the final hole but she hit her second shot into the marquee area before missing a six-foot championship putt. She ended up with a bogey while Lin narrowly missed an eagle chip by less than an inch that would have earned her the trophy. She tapped in for a birdie to force a play-off.

“I just cannot believe that chip didn’t go in. But, I mean, I’m pretty proud of myself. I haven’t been into much playoffs. I’m kind of calm down right now, but obviously when I just lost the playoff I feel a little bit sad,” said Lin, who has yet to win on the LPGA.

Madsen had two top-five major finishes in 2021 — she tied for third in the ANA Inspiration and had a share of fifth in the Women’s British Open. Her best result on the LPGA was second at the 2019 Indy Women in Tech Championship.

She finished tied for 17th in the Singapore LPGA event.

American Danielle Kang hit a hole-in-one on the par-3 8th hole before finishing in joint eighth place after shooting a 6-under 66.