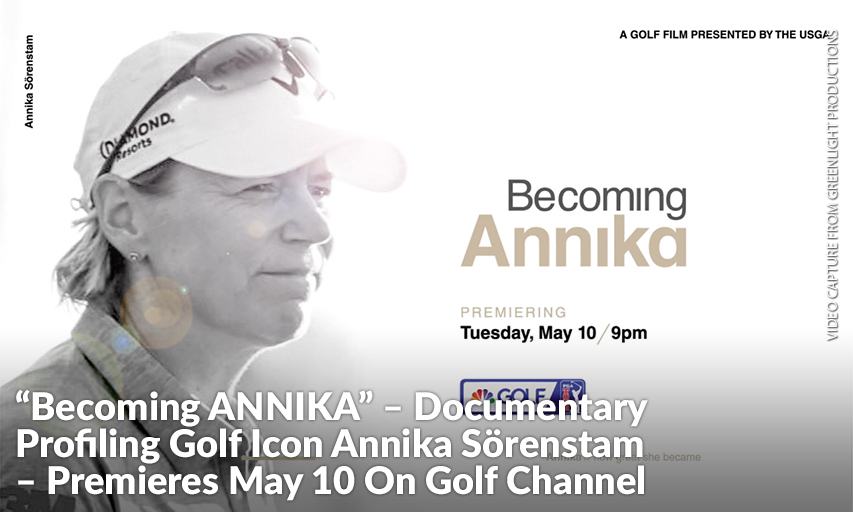 STAMFORD, Connecticut — “Becoming ANNIKA” – a new documentary produced by NBC Sports in conjunction with the United States Golf Association profiling the life and career of golf icon Annika Sorenstam – will premiere Tuesday, May 10, at 9 p.m. ET on GOLF Channel.

Academy Award-winning actress Hilary Swank narrates “Becoming ANNIKA,” which brings viewers on Sorenstam’s journey from her hometown golf course in Sweden to becoming one of the most prolific golfers in history. The film also touches on Annika’s personal life and her foundation work, providing women’s golf opportunities to girls at the junior, collegiate and professional levels.

“Watching a movie about yourself, it’s a bit surreal. It’s interesting to hear other people’s perspectives,” said Sorenstam. “Of course, I’ve spoken with my caddie many times and with my kids all the time, but for them to speak when I’m not there, the film just captures it all beautifully.”

The documentary, which began production at the 2021 U.S. Senior Women’s Open, Sorenstam’s first USGA championship in 13 years, features interviews with members of Sorenstam’s family, as well as influential players, executives and reporters within the game of golf, including:

“When we committed to an all-female production crew, we promised to deliver a film that you couldn’t tell was made by women,” said Gallagher, “but ultimately I think you can. And that’s a good thing.”

“Becoming ANNIKA” will also be shown on the NBC broadcast network on Sunday, June 5, ahead of final round coverage of the 77th U.S. Women’s Open Presented by ProMedica from Pine Needles Lodge & Golf Club in Southern Pines, N.C.

NBC Sports delivers comprehensive live golf tournament, studio, and shoulder programming; technology; and services around the sport of golf. Anchored by GOLF Channel, NBC Sports, GOLF Channel and USA Network feature more live coverage of the sport than all other U.S. television networks combined, including global tournament action from the PGA TOUR, LPGA Tour, DP World Tour, NCAA, USGA Championships – including the U.S. Open and U.S. Women’s Open – Olympics, The Ryder Cup and The Presidents Cup, as well as high-quality news, instruction and original programming. GOLF Channel – co-founded by Arnold Palmer in 1995 – is available to nearly 500 million viewers in nine languages across more than 70 countries. 24/7 live streaming can be accessed on NBCSports.com and the NBC Sports app, as well as exclusive content on Peacock.

Greenlight is an Emmy Award-winning, full-service video production house specializing in features, commercials, documentaries, branded content, and live television. Founded in 2020 as a branch of GO, a full-service marketing communications agency with locations in Hartford, Connecticut and Atlanta, Georgia, Greenlight comprises a team of insightful producers and directors who believe in the impact of storytelling through video. For more information about Greenlight, visit www.greenlightproductions.com.