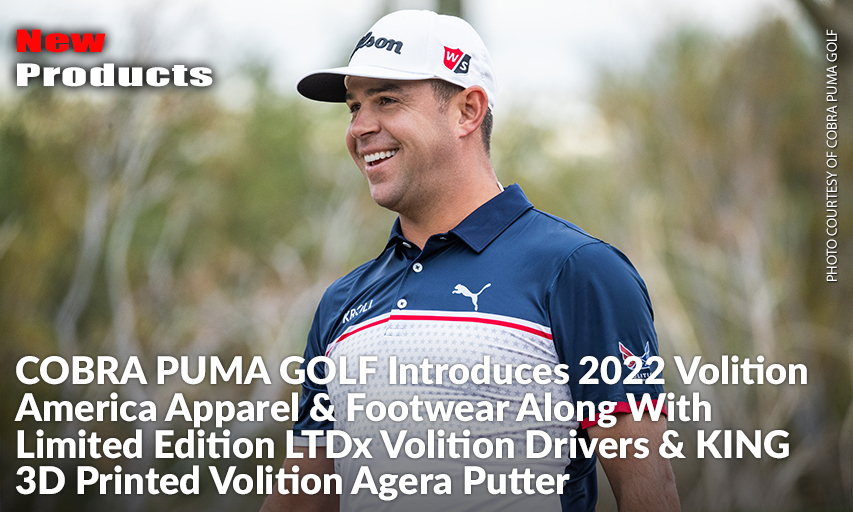 The PUMA x Volition America Collection will continue to make a bold, patriotic statement, bringing red, white and blue to the course through bold patterns, performance fabrics and eye-catching footwear, designed to honour the men and women who serve. A portion of the proceeds from these introductions will go directly to the Folds of Honor Foundation to support the families of American military heroes.

Like the LE LTDx Volition drivers, the LE KING 3D Printed Volition Agera putter features a patriotic red, white, and blue color scheme unique to the Volition line. Potentially the most stable putter available today, boasting an MOI of over 7600, the Agera features a 261g steel frame, 27g aluminum cap, and 53g of tungsten on the perimeter to create the extreme stability and forgiveness, while an intricate 3D printed nylon lattice structure in the rear of the clubhead relieves weight allowing for redistribution of mass to critical areas. The Agera also features an aluminum face insert with SIK’s patented Descending Loft Technology with four descending lofts to provide optimal launch for all types of putting strokes.

Both the LE Drivers and Putter (available at retail and online) include a custom USA-themed headcover which utilizes soft, premium synthetic leather featuring red, white, and blue accents and the Volition America logo.

Available in the 2022 collection, an assortment of polos (7 options that come in a variety of colours $75-80), a long-sleeve Volition Independence ¼ zip ($90), a Volition Golf hoodie ($98), a Stars & Stripes snapback cap ($32) and a pair of IGNITE Articulate Volition, and new spiked shoe from PUMA Golf (more info coming soon). All PUMA x Volition gear is available, except the shoes which can be pre-ordered and will ship June 8, 2022.