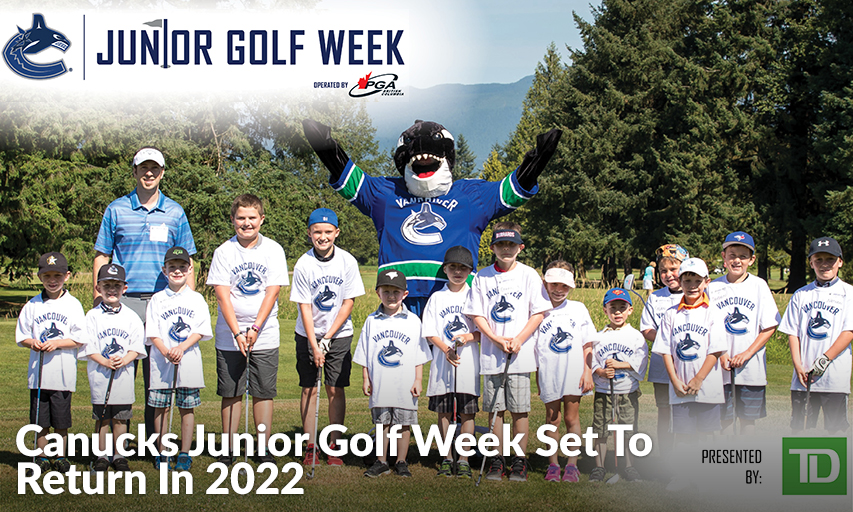 Since its inception in 2014, over 5,000 children have participated in Canucks Junior Golf Week with the vast majority being introduced to the game for the very first time. Boys and girls from all sports and backgrounds across British Columbia have participated, with most participants being under the age of ten.

The return of the program will see facilities take on single-day camps from July 11-18 at dozens of communities throughout the province. Children and youth aged 5-18 years will have fun learning the fundamentals of golf through certified PGA of British Columbia instructed golf camps within their respective communities.

“Communities from all over the province have embraced this program through its history and we are thrilled to bring it back,” says Donald Miyazaki, Executive Director of the PGA of British Columbia. “The safety of participants and PGA Professionals remain at the forefront of our priorities, and the last two seasons did not allow us to conduct camps in an appropriate setting. Golf has taken a sudden surge during these times and we are excited to welcome even more golfers to our sport.”

The cost for a one-day camp during Canucks Junior Golf Week is only $20 (+GST), which includes equipment rental (if required), facility fees, an item featuring the Vancouver Canucks logo, and certified golf instruction. The length of each camp will vary by facility, the number of attendees, and the general age of the participants, but camps would be estimated to be approximately 90-minutes in length.

The community-driven partnership with the Vancouver Canucks and BC Hockey allows thousands of minor hockey players, coaches, and parents to access a sport.

“We are delighted to partner once again with the PGA of BC and TD to bring Canucks Junior Golf Week back after a two-year break due to the pandemic. We believe that kids should have access to try all types of sport through low-cost opportunities like this one, and the game of golf is so much more than the game itself. It’s the opportunity to be outside, spend time with friends and family and even improve your hockey skills while you’re at it,” said Chris Brumwell, VP of Communications, Community & Social Impact at the Vancouver Canucks.

More information on the program including available camps will be available in the coming weeks, with participant registration set to open in early June. Full details and updates will be provided on the program’s event page, www.pgabc.org/golfweek.