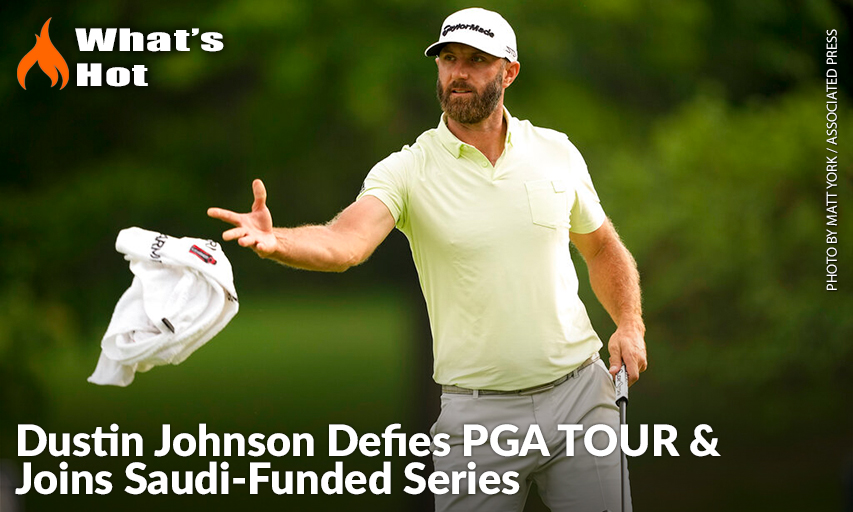 DUBLIN, Ohio — Three months after declaring he was “fully committed” to the PGA TOUR, Dustin Johnson is among 42 players in the field for next week’s LIV Golf Invitational, which offers a $25 million in prize money that’s backed by Saudi Arabia’s sovereign wealth fund.

Phil Mickelson was missing from the list that was released Tuesday night. It was his damaging remarks in February that led to Johnson and other top players to say they would stay on the PGA TOUR.

The LIV Golf Invitational is scheduled for June 9-11 at Centurion Club outside of London. The PGA TOUR and European tour denied releases for players, meaning they risk punishment — possibly a loss of tour membership — by competing.

“Dustin has been contemplating the opportunity off and on for the past couple of years. Ultimately, he decided it was in his and his family’s best interest to pursue it,” David Winkler, Johnson’s manager at Hambric Sports, told The Associated Press in a text message.

“Dustin has never had any issue with the PGA TOUR and is grateful for all it has given him but in the end felt this was too compelling to pass up.”

That was a turnaround from his comments in February when Johnson issued a statement that he was committed to the PGA TOUR and that he was "grateful for the opportunity to play on the best tour in the world and for all it has provided me and my family.”

Johnson, whose last victory was the Saudi International in 2021, is No. 13 in the world, the highest-ranked player in the field. He had held the No. 1 spot in the world longer than any player since Tiger Woods.

Greg Norman, in his second try to create an alternative circuit to the PGA TOUR, had made a strong push for Johnson. Still to be determined is how much Johnson is being paid to join the Saudi venture.

Other players in the 48-man field were not a surprise; Lee Westwood and Sergio Garcia had indicated they would be playing, along with Ian Poulter and Louis Oosthuizen.

The field features four of the top 50 in the world ranking and 16 of the top 100. LIV Golf said the other six spots would be filled by invitations and from the Asian Tour’s International Series tournament this week in England.

That means Mickelson, who has not played since the Saudi International in early February, could still be part of the field.

“Free agency has finally come to golf,” said Norman, the CEO and commissioner of LIV Golf. “This is an opportunity to start a movement that will change the course of history by bringing new and open competition to the sport we all love.”

American players who are chasing the Saudi riches are Talor Gooch, who won his first PGA TOUR event last fall at the RSM Classic; three-time tour winner Hudson Swafford; and Kevin Na. The field has 13 players who have full PGA TOUR membership this year.

Johnson was expected to play in the RBC Canadian Open next week, as he has an endorsement deal with the Canadian bank as one of its ambassadors. Even if he has to give up his deal, the money he would get from the Saudi league likely would be worth far more money.

The Public Investment Fund of Saudi Arabia is the main source of funding for LIV Golf. Norman’s vision is to have 54-hole tournaments with a shotgun start — every group starts at the same time on different holes — with $20 million for the individual purse and $5 million for a team component. The winner gets $4 million, while last place gets $120,000.

Eleven players on the list are exempt for the U.S. Open, which will be held the week after the LIV Golf Invitational at The Country Club outside Boston.