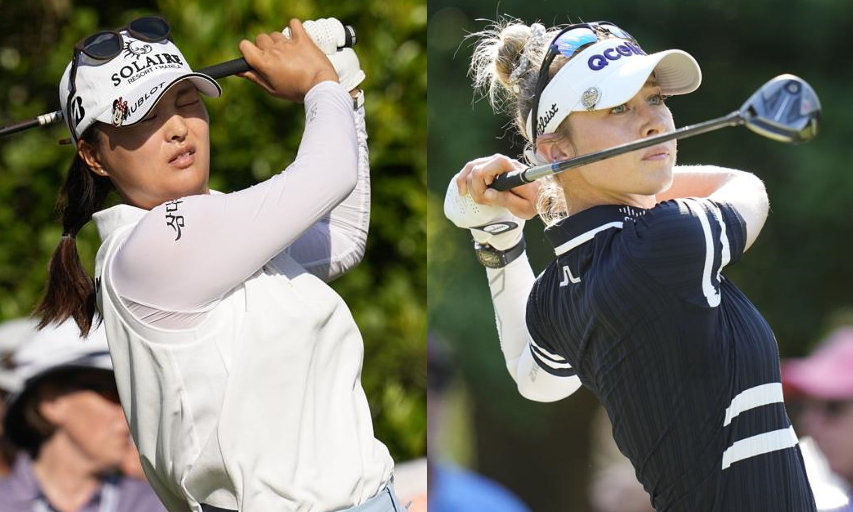 SOUTHERN PINES, North Carolina — Women’s golf is on the rise, a momentum swing not lost on fans and sponsors.

With an abundance of emerging stars gaining notoriety, the sport is drawing more attention — and sponsorships — in the post-Covid era. Tickets sales for the U.S. Women’s Open are up more than 50% over the three-year, pre-COVID average, according to the USGA. The LPGA said its broadcast numbers are up 20% over that span.

South Korea’s Jin Young Ko and America’s Nelly Korda are not yet household names, but are leading the charge. They combined to win nine LPGA Tour tournaments last year. Ranked 1-2 in the world, both landed on Forbes’ 2022 list of top 10 highest-paid female athletes in the world.

Ko collected $4 million from endorsements deals with LG Electronics, Jeju SamDaSoo mineral water, Korean Air and Rejuran skincare products. Korda, who returned to action after surgery to repair a blood clot in her arm, earned $3.5 million in endorsements with more than 10 sponsors, per Forbes. She has more than 504,000 followers on Instagram.

Lexi Thompson remains one of the biggest draws in women’s golf with her powerful swing along with former NCAA champion and August National Women’s Amateur winner Jennifer Kupcho, who is coming off her first major championship.

Then there’s 19-year-old Rose Zhang, who in the next few years might become the biggest crossover player on the LPGA Tour since Michelle Wie West, who received immense media attention when she turned pro a week before her 16th birthday in 2005.

Zhang won the 2020 U.S. Women’s Amateur and has been the top-ranked amateur in the world since. She won the NCAA championship last month as a freshman at Stanford and helped the Cardinal to a national title while amassing an NCAA record 69.68 scoring average.

The youth parade also includes 16-year-old Anna Davis. She turned heads after winning the August Women’s Amateur and twice receiving a sponsor’s exemption to play on the LPGA Tour — making the cut both times. Like the other players at the U.S. Women’s Open, Davis was gifted with a new rental car to use to get around Southern Pines.

Only problem is she doesn’t have a driver’s license.

“Look at all the amateurs that continue to either be exempt or qualify into this championship,” said Shannon Rouillard, a senior director with the UGSA. “We’ve averaged somewhere in the vicinity of 30 amateurs in this championship over a number of years. I think right there that just speaks to the future of the women’s game moving forward.”

While tomorrow looks promising for the women’s game, it’s not doing too bad today — especially overseas, where it is incredibly popular.

There are about 30 credentialed international media members on site at Pine Needles and approximately 200 more in the USGA’s virtual media hub.

Of the top 10 players in the women’s world ranking, eight are international players. It’s been that way for years, as the LPGA Tour was well ahead of the PGA Tour in attracting the best players from every corner of the globe.

On Thursday, Sweden’s Ingrid Lindblad recorded the lowest round by an amateur in the 77-year history of the U.S. Women’s Open, a 6-under 65 that left her one shot behind first-round leader Mina Harigae.

Lydia Ko, who was born in South Korea and raised in New Zealand, won her first LPGA event as an amateur when she was 15. She reached No. 1 in the world for the first time at age 17 and now has 17 LPGA Tour victories.

Yuka Saso, with dual citizenship in The Philippines and Japan, won the U.S. Women’s Open last year at age 19.

And corporations are taking notice.

New Jersey-based technology firm Cognizant invested in golf by becoming a global partner for the Presidents Cup, but not without investing in the LPGA Tour as title sponsor of the Founders Cup. It raised the purse to $3 million, the largest among regular LPGA events.

Aon, the London-based financial risk insurance company, created the “Aon Risk-Reward Challenge” bonus for men and women, awarding a $1 million prize to the winner of each tour. KPMG and Chevron initially entered the men’s golf market. Both are now title sponsors for women’s majors and have raised prize money to record levels.

Total prize money this season has crested $90 million, a big leap from $67 million two years ago. That still pales in comparison to the men, which has a deeper heritage and has leaned on the powerful appeal of Tiger Woods. Purses top $425 million on the PGA Tour.

The increased purses are a step in the right direction for women.

USGA chief executive Mike Whan, the former LPGA commissioner, recently added ProMedica, a health care company, to sponsor the U.S. Open. The purse nearly doubled from $5.5 million to $10 million in one year. The winner gets $1.8 million, the largest payout ever in women’s golf.

Annika Sorenstam, who returned to play in the U.S. Open after a 13-year hiatus, was the biggest name in women’s golf for years, amassing 72 wins and 10 majors on the LPGA Tour while winning more than $22 million during her career.

But at 51, her playing career is essentially over.

She’s primarily competing in the U.S. Open to spend time with her family and celebrate her prestigious career.

But Sorenstam, who spent years helping to grow the women’s game through her Annika Academy in Florida, is excited to see where the game is headed with the up-and-coming stars.

“It’s so neat so see that women’s golf is in good hands,” she said.