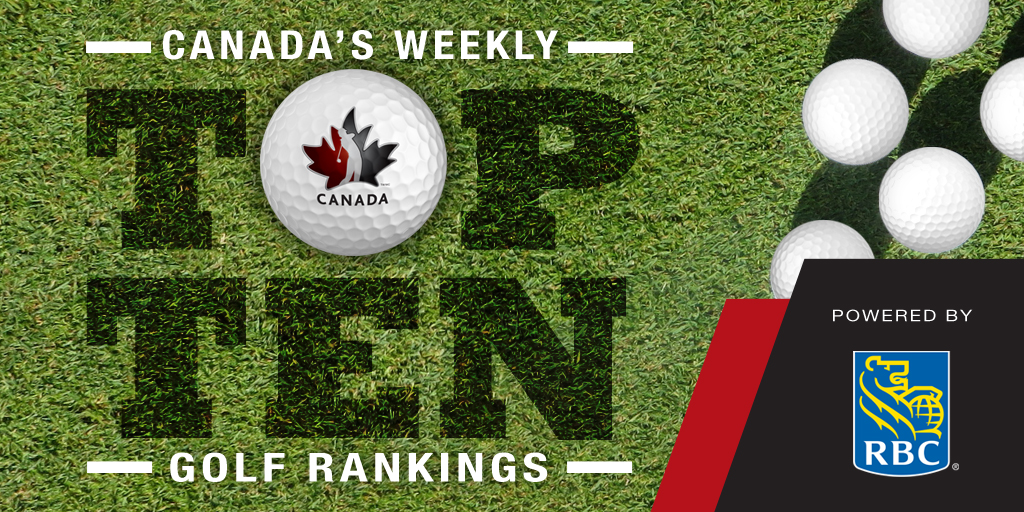 Positive gains by every member of the Top-10 heading into the holiday period, including Josh Whalen who was honoured as the 2017 Golf Canada Amateur Player of the Year. Whalen claimed the top spot in the National Order of Merit following an impressive season that included a third place finish at the Canadian Men’s Amateur Championship. As a senior at Kent State, Whalen also recorded six top-20 results including a runner up finish at the Boilermaker Invitational. The Golf Canada National Team member has gained 316 spots in the world rankings over the course of the year, helping him move from outside the Top-10 at the start of the year up to No. 4 in Canada among amateurs.

Biggest move: Carter Graf gained 773 spots in the world rankings after competing in the team portion of the Aaron Baddeley International Junior Championship. Graf and the rest of the Canadian team members finished fifth at the event.

For the third straight year, Maddie Szeryk has been named Golf Canada’s Amateur Player of the Year. The national team member had three wins this year including the B.C. Women’s Amateur Championship. The senior at Texas A&M has notched a top-10 result in all five fall collegiate events and four top-5 finishes including runner-up results at the Jim West Challenge and the Maryb S. Kauth Invitational. She also notched a win at the Dr. Donnis Thompson Invitational last spring and finished in a tie for 13th at the NCAA Championships. So far this year, Szeryk is up four places in the world rankings after ending 2016 as the No. 32 ranked amatuer in the world.

Adam Hadwin will finish as the top ranked Canadian for the first time in his career. The Abbotsford golfer is poised to finish the current year ranked inside the top 60 – another first as his previous best came a year ago when he ended the year at No. 191. Hadwin took over sole possession of the No. 1 ranking in Canada from Mackenzie Hughes in Week No. 4, the week after he posted a runner-up finish at the CareerBuilder Challenge. It was one of three top-5 results this year for Hadwin which included his first career PGA Tour win at the Valspar Championship. That led to his first Masters appearance, where he finished in a tie for 36th. Hadwin has gained 132 spots to date in the world rankings over the course of a year and will be the only Canadian to be ranked inside the top 100 in the world in 2017.

Outside the Top-10, four Canadians earned status on the Web.com Tour for 2018. Ryan Yip (No. 21 in Canada) is guaranteed to start in the first 12 events after finishing in a tie for 10th at Q-School. Albin Choi(No. 14), Stuart Macdonald (NR) and Seann Harlingten (NR) will all have guaranteed starts through the first eight events after finishing in the top 45 and ties.

For the third straight year, Brooke Henderson will finish as the top ranked Canadian female golfer. Henderson, who grabbed the top ranking in Canada when she was still an amateur, will end the year down from her career high No. 8 world ranking a year ago. The 20-year-old recovered from a slow start, posting seven of her eight top 10 results from May onward including a pair of LPGA Tour wins. She came within a stroke of defending her major title at the KPMG Women’s PGA Championship. Henderson was one of a record 17 players to crack the $1-million mark in earnings on the LPGA Tour in 2017, finishing sixth on the list with just over $1.504-million.