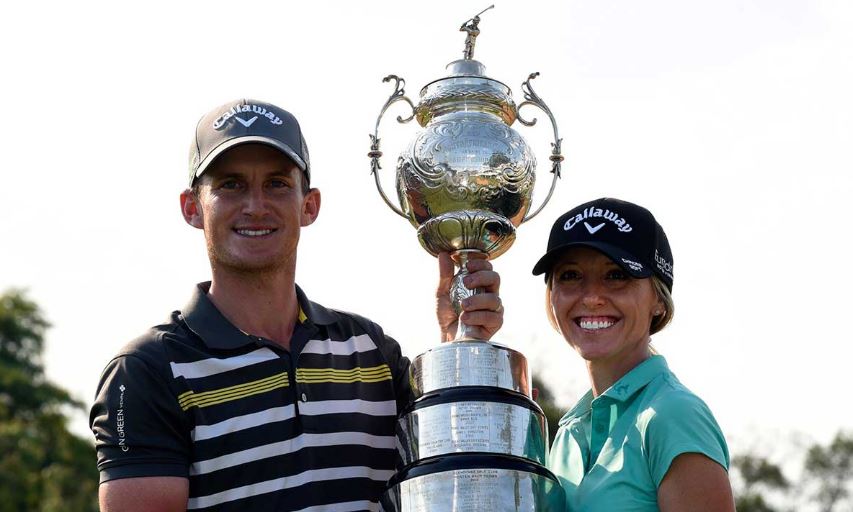 JOHANNESBURG, South Africa (AP) — With his wife as his caddie, Chris Paisley beat the challenge of home favorite Branden Grace to win the South African Open by three shots and claim a first European Tour title.

Ahead by one overnight, Paisley increased the gap at the top with a final-round 6-under-par 66 at Glendower Golf Club in Johannesburg to finish 21 under overall. The Englishman made six birdies and didn’t drop a shot in a flawless finish on the way to his breakthrough win on the tour.

Grace, an eight-time European Tour winner, started with a birdie and an eagle and held the lead briefly before his challenge faded after a double-bogey on No. 6 and a bogey on No. 12. He finished strongly, with an eagle and two birdies in his last six holes to card a 68 for 18 under.

The 31-year-old Paisley, with wife Keri carrying his bag for the first time, kept his nerve during Grace’s early charge and kept the title in English hands after Graeme Storm won last year.

Grace finished in second on his own with another South African, JC Ritchie, third on 16 under after a 65. Zimbabwe’s Scott Vincent and South Africans Jacques Kruyswijk and Jacques Blaauw were tied for fourth on 14 under.

Chase Koepka, the younger brother of U.S. Open champion Brooks, finished with a 71 for 13 under overall and in a tie for seventh.