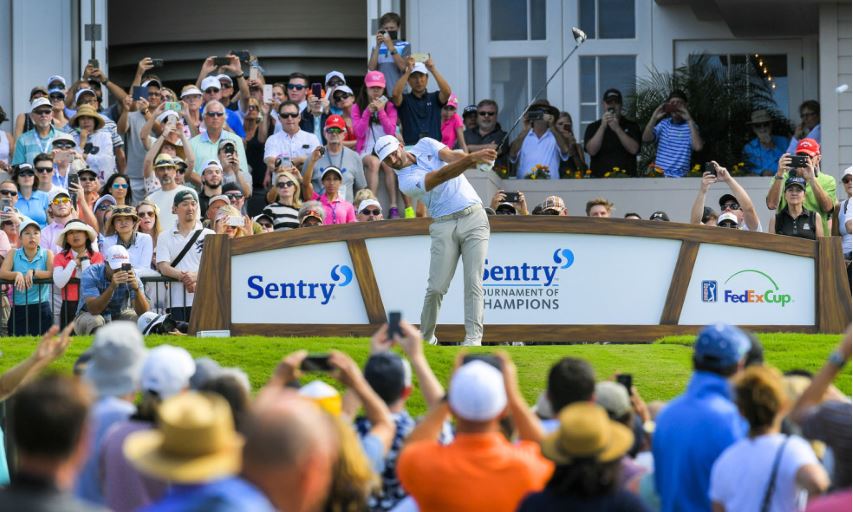 Even The Biggest Names In Golf Today, Like Dustin Johnson Shown Teeing Off Here On No. 1 At The Sentry Tournament Of Champions In Maui, Can't Draw More Than A Few Thousand Well-Behaved, Polite Fans A Day.

CALGARY, Alberta (Gord Montgomery/iG) — If one were to compare two PGA TOUR golf tournaments head-on, the pair that would provide the widest variance in atmosphere would have to be the Tournament of Champions in Maui and the Waste Management Phoenix Open.

After all, the former is like a private house party with a few invited, well-behaved guests. The second, well, it’s much like a frat house party that’s wildly out of control.

The thing is, and this is a question being raised in many circles, what is the proper way to hold/host a pro golf tournament?

Calgary golf pro Tiffany Gordon had the opportunity to attend both of these tournaments this year, and agreed the Richter scale differential between them was noticeable. And not necessarily in a good way.

She noted that the Phoenix event has become somewhat of a circus, given that many of the hundreds of thousands of spectators that show up really have no idea what is going on, outside of the idea it is indeed a party, especially at the raucous 16th hole.

As for Maui, well, calm and cool is the key to that event.

“I was in Maui and it’s very, very laid back. It’s fantastic! What an opportunity to see things up close,” she began of her comparison,” Gordon began. There weren’t any actual attendance numbers to be found online, but generally there are a maximum of 5,000 or so people a day at Kapalua.

“Then I was at the Phoenix event as well. I was there Thursday and Friday, and even on the Friday (where the attendance was announced at 191,400) you could hardly move. I took a gentleman on Friday, who’d never been to a PGA event before, and he goes, “Is this like all the PGA events?” And I’m like, “OK. There are other PGA events and then there’s this.”

What “this” was, was another record setting year for attendance at the tournament, one where spectators are lined up hours before the gates opened, in hopes of securing one of the coveted spots along the par 3, 16th hole. When all was said and done this year, a new record was established, as 719,179 people marched onto the grounds, including 216,818 on Saturday alone to, well, sort of take in the action. 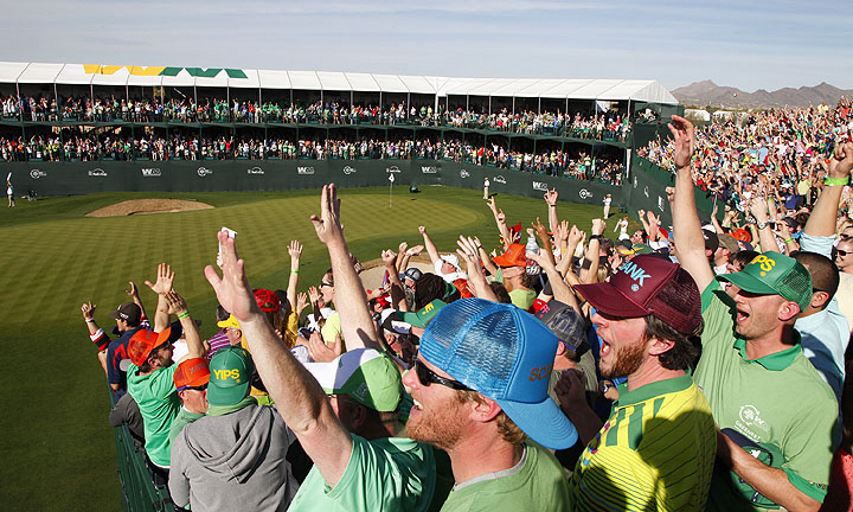 The 16th Hole At The Waster Management Phoenix Open Is World Famous, Not Necessarily For The Great Shots Turned In There But More For The Rowdy Reception Fans Give To Good, And Bad, Shots.

You see, many of the so-called spectators have little to no idea what golf is about, or what watching the sport is about, said Gordon, who described the differences between Maui and Phoenix as, “The difference between watching rugby and figure skating. Figure skating is fairly calm and traditional, all of that, compared to this.”

She continued speaking about the atmosphere in what’s touted as ‘The Greenest Show on Grass’ by saying, “My fear is that some of the players will stop coming to it because it’s too much. Thursday was fine. Friday, I felt for every volunteer out there. They couldn’t get people to stop walking, to stop talking. I mean, how do you go to a PGA event and you get a streaker? A guy jumps out of one of the balconies into the water … you know what I mean?

Asked whether she thought the Phoenix mayhem was good, or bad, for golf considering where the public version of the game has gone in the recent past with on-course music, different sorts of dress and conduct, Gordon said the game is changing but enough is enough.

“I broke my mould a little bit. I used to be such a traditionalist but I get now that yeah, there is music on a golf course, within reason. Yeah, people wear their hats backwards. OK, I get it. Shirts don’t have to be tucked in. OK. You can get past all of that but at the end of the day, in Phoenix, that’s a party not a golf tournament. The golf tournament interrupts the party!”

Comparing Maui to Phoenix is like comparing noise levels at a library to a rock concert. Earplugs, and a good helping of patience, are mandatory in sitting and watching in Phoenix.

“In Maui, friends were playing in the Pro-Am so I was lucky enough to stand on the range and see some of the best golf swings in the world. You go there, and it’s just such a relaxed atmosphere. So easy going. They’re (pros) accessible. There’s no way in Phoenix they’re accessible.”

Another huge difference between the two is seeing the action. In Maui, if someone’s blocking your view you only have to move a few feet for an unobstructed sightline. In Phoenix, you’d have to move a few miles just to rid yourself of the thousands of people in front of you who are continually jockeying for position.

“You can’t see,” Gordon said of Phoenix. “We tried to walk around and see some of it … that’s why people get there early, camp out at a hole and that’s where they stay. They don’t move. In Maui, we walked for three days,” a tough trek called “fitbit overload,” by Gordon. “The last day we sat on eight (a par 3) and saw every group come through, up close and personal,” which is virtually impossible at the Phoenix show.

As well, in Phoenix if you leave a prime spot to say, visit the biffy, there’s no guarantee you’ll get it back. In Maui, chances are pretty good that spot will be unoccupied when you return, and if not, there’s always another close by. 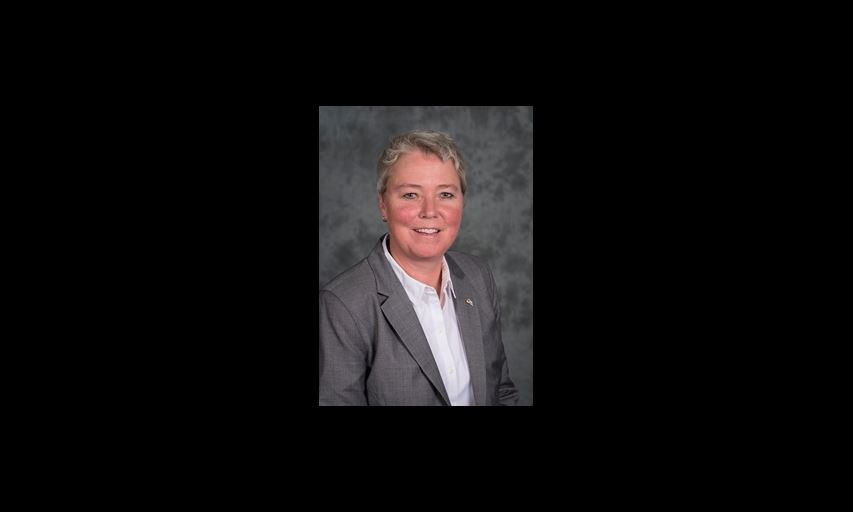 Tiffany Gordon, A Teaching Pro From Calgary, Figures The Event In Phoenix Has Perhaps Gone Just A Bit Too Far In Letting The Fans Have A Good Time. (Photo/PGA of Alberta)

So, from a golf pro’s perspective, what should become of the gong-show stop in Arizona? Should it be scaled back fan-wise? Should fan conduct be monitored better? Boisterous behaviour restricted? While that could happen, the tournament does serve a huge purpose in providing charitable donations of over $86 million (US) from gate receipts thus far.

“What I do love, because of the number of people they drive through there, is what they do for children’s charities,” said Gordon. “Look what it does for the economy. The charities. You’d never want that to go away but I think there is a happy medium. Do I think they’re pushing the envelope? One hundred and ten percent. But how do they reel that back now?”

“When you look at the hype … my biggest fear is that it just gets so blown out of proportion and after all, there is actually a PGA event going on,” with lots of money on the line.

So simply put, if you’re looking to take in a professional golf tournament where players are approachable and relaxed, head to Maui. If you want to party, and more or less ignore the players and the tournament, head to Phoenix. Either way, there is a golf tournament going on. Whether or not you want to watch it is totally up to you.