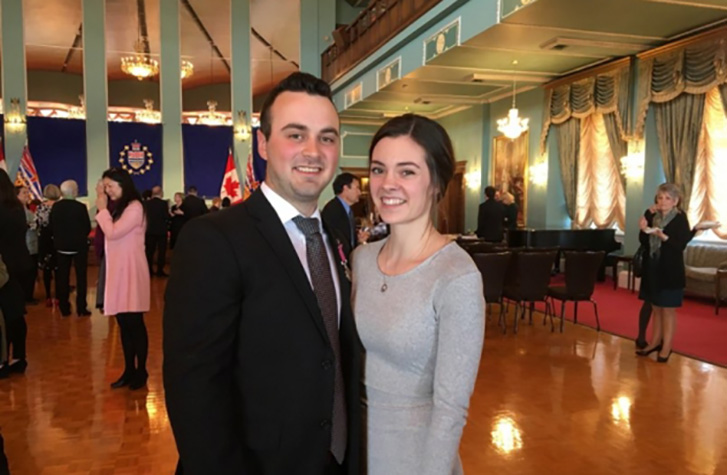 Janson Chapman And Becca Covey At Government House In Victoria, Where Chapman Was Honoured For Saving Covey's Life - Photograph By TIMES COLONIST

VICTORIA - A hiking date on Vancouver Island for two friends turned into a life-saving rescue from the edge of a frigid waterfall that earned Janson Chapman a bravery medal and a lifetime partner.

Chapman, a golf course greens keeper from Colwood, was one of 46 people honoured Wednesday with medals of service by Gov. Gen. Julie Payette during a ceremony at British Columbia's government house.

Twenty-two-year-old Chapman said he was on a date last March with Becca Covey near Gold River when she slipped on ice, fell about 15 metres and ended up clinging from a log at the edge of the Lower Myra Falls.

Chapman said he climbed down a cliff and ventured out onto the icy ledge where he managed to pull his injured friend to safety, after which he carried her on his back for 40 minutes to get her to hospital. He said he remembered throwing his jacket out to her to pull her to safety, but it ripped.

"I don't honestly remember too much of pulling her out," Chapman said after the awards ceremony. "I guess the adrenalin was fuelling me at the moment. But I was able to do it and am very thankful of the outcome."

Chapman said he could hear were Covey's cries for help and Covey said all she heard was Chapman saying he loved her and wasn't going to lose her. 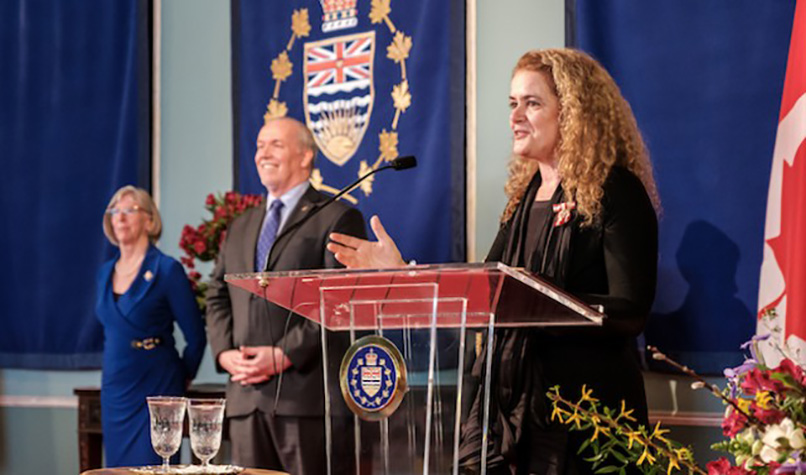 She said she was paralyzed with fear and pain after falling and landing on rocks below. She said she was hanging onto the log as Chapman came closer and kept urging her to move towards him.

"He had to put half of his body off the cliff to reach me and then we grabbed hands and I kept adjusting because I couldn't feel his hands," said Covey. "He was just encouraging me the whole time and we were both praying. Then out of nowhere he was pulling me up."

Covey ended up in hospital for eight hours and suffered head, neck and shoulder injuries but has since recovered. She said the couple's romance blossomed after the dramatic rescue and they are now engaged and will be married this summer.