Lots Of Love To Go Around At Barefoot And Tidewater Courses 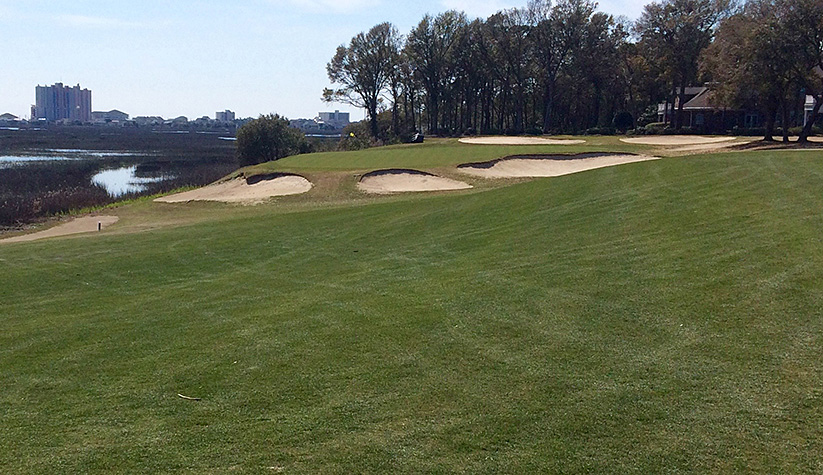 This Hole At The Tidewater GC Is, To Say The Least, Well Protected. It Is One Of Many That Challenges Players To Not Only Hit Straight Shots, But Shots Of The Right Distance To Stay Out Of Trouble - All Images Credit Gord Montgomery/ Inside Golf

North Myrtle Beach, SC - When you travel you want to play the best courses you can, as it turned out, the courses in this part of the Grand Strand area got the best of me.

The Tidewater Golf Club is one of those unimposing setups that can catch you by surprise, especially if you underestimate its tough greens. While the fairways here are wide, the greens themselves make up for that by providing a number of false fronts and subtle breaks.

There are a number of memorable holes here, including a couple of the par-3s and a pair of interesting short par-4s. The best of the short holes has to be the 12th, known as the Wishing Well, where, if you hit your tee shot like I did into the wind, and at sea level, you wished you had played one more club. Or even two more.

That tee shot has to carry the lowland marsh area on this 152 yard test and with the ball going into a long, but narrow green well protected by a phalanx of bunkers, this is anything but an easy hole.

As for an interesting par 4 hole, the one called Tar Kiln proves you don't need to be stretched out to well over 400 yards to be tough. In fact, with this one coming in at an even 300 yards off the white tees, it looks like a birdie hole from the get-go.

That is, of course, if you get your ball on the green in regulation and don't land it in one of the big bunkers that front the putting surface, or worse yet, tug the shot to the left side of the green.

There, the bunker sits about 30 feet below the green which calls for a huge swing - and a lot of luck - to land anywhere near the green, let alone close to the hole. 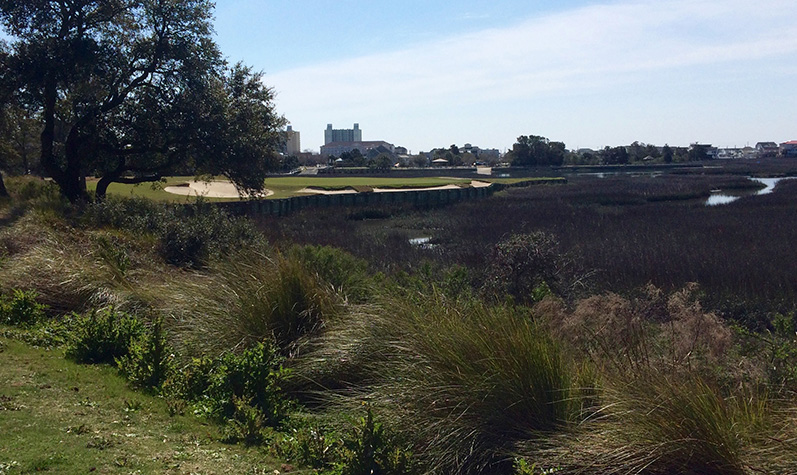 Yes, There Is A Green Hidden Back Among The Tall Grasses And Water On This More Than Challenging Par-3 On The Tidewater Course

This is a courses set in amongst a housing development but with a difference - you know the homes are there but they are set well enough back from the fairways to let you swing away without (too much) fear of smacking one.

However, interestingly enough, the homeowners are nice enough to let you retrieve your ball from their premises, if you can reach it without setting foot on their property (I didn't get to try this out firsthand, so I just have to believe what the starter told me).

From the tips this course measures out at just over 7,000 yards, but since it's at sea level, the whites which were used on this day, with the wind up, played to a fairly tough 6,300 yards.

The only downside to this course, which would be a great one to walk, is that that idea is spoiled by the huge distances between greens and tees. In fact, some of those cart rides from Point A to B seemed so long you wondered what the fare in a taxi would have been and if it would have equalled the green fee paid to play on this day. Well, probably not, but you get the idea.

That aside, this track has received great acclaim by notable publications, including being the only course ever to be honoured as the Best New Course by both Golf Digest and Golf Magazine.

Lots Of Love For Davis

As one of four courses in the Barefoot Resort area, the Davis Love III course is seen by many as the top track among the layouts also designed by Pete Dye, Greg Norman and Tom Fazio. In fact, this foursome was so popular the quadruplex was named as the 2017 North American Golf Resort Of The Year.

The Love track is yet another one with large, generous landing areas but you often find your approach shots are into several false-fronted greens that are said to have much in common with those found at Pinehurst #2.

One of the interesting things about this course, and the other three, are the grasses used. There is a mixture of Tif-sport Bermuda for the approach areas; the greens are a newly acquired Champion Ultra Dwarf and the rough is seeded with 419 Bermuda. Not sure what all that means but it seems to work as the Love course on this day was in immaculate condition. 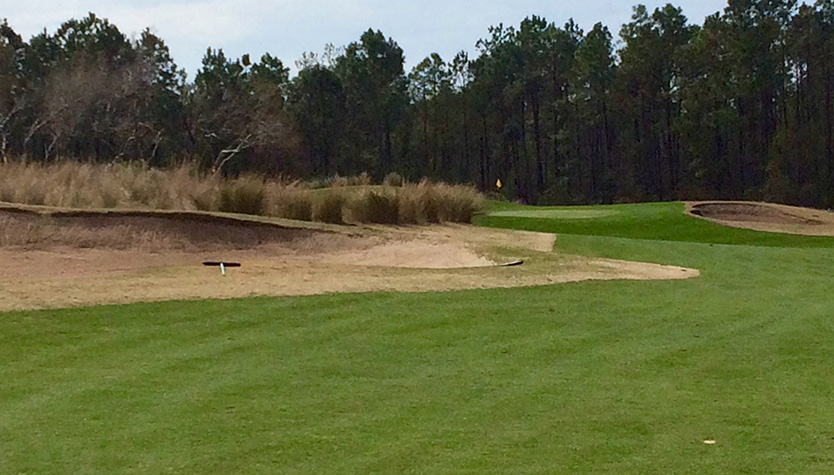 The Love Course At The Barefoot Resort Is Said To Be The Most Popular Of The Four 18-Hole Tracks On The Property, Even With Intimidating Shots Like This One On The Back Nine Awaiting Players

The Love namesake is more of a links-style layout than its brothers, with a number of waste areas scattered about. While there isn't a lot of water, it is there so you can't just whale away without caution. The greens, while large, don't have a lot of undulation to them so if you can hit your putts straight, which I seem to have trouble doing, you can score well here.

That, though, is belayed by the fact the fairway is split down the middle by water with the longer route being down the left side. Then, to top things off, the green is elevated making for a great risk-reward hole.

And if you're unsure whether this is enough of a course to test your game, just remember it hosted Golf Channel's Big Break, so that in itself should be enough to ensure you a challenge on this Davis Love III grand design.