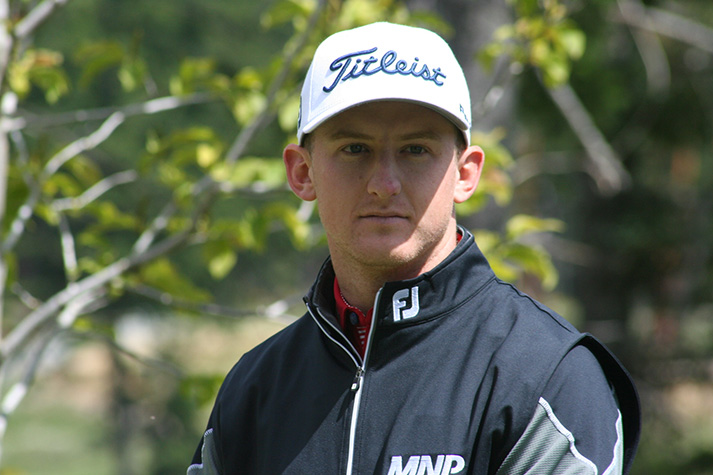 Kimberely, BC's Jared du Toit Was Alone In 3rd Heading Into The Final Round But Had A Tough Sunday At The Bayview Place DCBank Open Falling To 23rd Overall. He Was Still The Low Player From BC. (BC Golf/Bryan Outram)

The Canadian drought continues on the Mackenzie Tour-PGA Tour Canada circuit. There were plenty of Canadian flags on the leaderboard heading into the weekend, but not many left when the final round of the Bayview Place DCBank Open was completed Sunday at Uplands Golf Club in Victoria.

Texan Sam Fidone, who had a two-shot lead heading into Sunday’s final round, closed with a bogey-free five-under 65 and won by five shots with a 72-hole total of 19-under par. Calgary’s Wes Heffernanwas the only Canadian in the top 10. Heffernan, who shot a 68 on Sunday, finished tied for sixth at 11-under. That earned him the weekly bonus of $2,500 from Freedom 55 Financial for being low Canadian.

Kimberley’s Jared du Toit, who began the day alone in third place, struggled to a five-over 75 Sunday and finished tied for 23rd place at six-under par. Manitoba’s Aaron Cockerill (T14 at eight-under) and Ontario’s Taylor Pendrith (T23) were the other Canadians inside the top 25. A Canadian hasn’t won on the Mackenzie Tour since Langley’s Adam Cornelson won at Uplands in 2016.

Kelowna’s Matt Hopley earned the junior exemption off the Zone 2 Junior Tour Order of Merit and will play in the event for the second straight year. Finlay Young of The Harvest Golf Club earned the exemption given to the Interior PGA Tour.

This is the third playing of the GolfBC Championship. The previous two winners, Dan McCarthy (2016) and Robby Shelton (2017), are both regulars on the Web.com Tour.

Abbotsford’s Adam Hadwin has drawn American Kevin Kisner and England’s Ross Fisher as his playing partners in the first and second rounds of this week’s U.S. Open at Shinnecock Hills in Southampton, N.Y. This is Hadwin’s fourth U.S. Open. He tied for 60th last year, missed the cut in 2013 and tied for 39th in 2011.

Fellow Abbotsford native Nick Taylor closed with a four-under 66 in Sunday’s final round of the FedEx St. Jude Classic in Memphis and finished tied for 30th place. Taylor now stands 118th on the PGA TOUR’s FedEx Cup points list and must remain inside the top 125 at season’s end to retain his exempt status for the 2018-19 season.

Justin Shin of Maple Ridge continues to play well on the PGA Tour China circuit. Shin fired rounds of 68, 71, 66 and 67 to finish third at the Guilin Championship. Shin’s 72-hole total of 16-under par was two shots behind winner Charlie Saxon of the United States. It was Shin’s second top-3 finish in a month. Shin tied for second with Saxon at last month’s Haikow Championship.

At the recent Canada West annual general meeting in Kelowna, a motion by the University of the Fraser Valley to add golf as a Canada West sport beginning in 2019 was approved.
“Many Canada West institutions have strong golf programs, and we’ve been competing against them at invitationals for many years,” said UFV director of athletics Steve Tuckwood. “We felt it was time for Canada West to formalize its members’ commitment to golf.”

Morningstar Golf Club in Parksville has been placed into receivership. The Parksville Qualicum Beach News reports that the B.C. Supreme Court earlier this month appointed G. Powroznik Group Inc. to take over management of the club’s properties and assets. The club was formerly owned by an Edmonton-based family, whose company filed for bankruptcy last year.

The course remains open and the new managers hope to find a new owner for the course. “It has been neglected a bit so we’re going to try and bring it back and eventually find a good buyer for it,” said managing director Gary Powroznik.

Brandes began the final round in third place, four shots behind Bradley, who led after the first two rounds of the 54-hole event. He caught him with a two-under 69 that left Brandes with a total of three-over 216.

Bradley closed with a four-over 75 and finished tied for second with Jim McNelis of Gig Harbor, Wash., two shots back of Brandes. Burnaby’s John Gallacher finished seventh in the Super Senior Championship, five shots behind winner Carey Watson of Bend.

Shaughnessy members Jay Snyder and Brandan Price made a nice run at the 82nd John G. Anderson Memorial at Winged Foot Golf Club in Mamaronek, N.Y.. Snyder and Price advanced all the way to Sunday’s final of the prestigious four-ball event before losing 3&2 in the championship match to Brett Boner and Stephen Woodard of Carolina Golf Club.