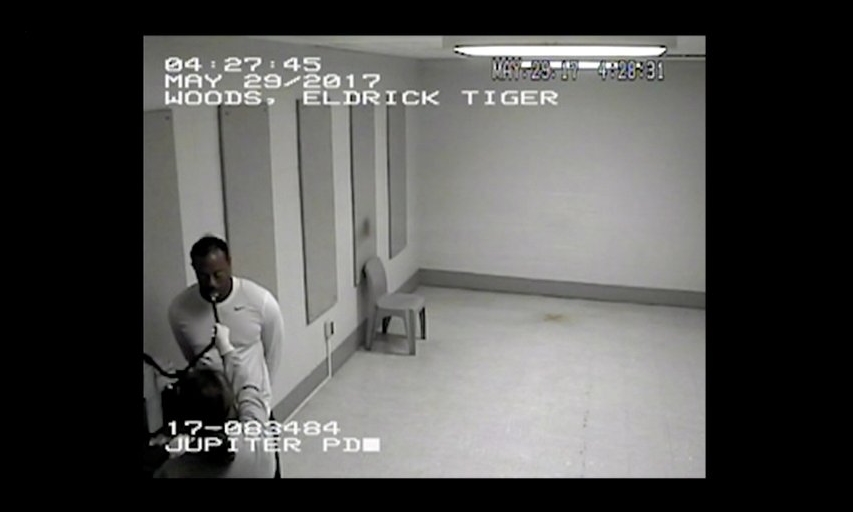 In This May 29, 2017, Image Made From A Surveillance Video Provided By The Jupiter Police Department, Tiger Woods Uses A Breathalyzer At The Palm Beach County Jail Following His DUI Arrest. Woods Told The Officers He Had Not Been Drinking, And Two Breath Tests At The Jail Registered A 0.0 Blood-Alcohol Level. Woods Is To Be Arraigned July 5 In Palm Beach County Court. (Jupiter Police Department Via AP)

WEST PALM BEACH, Florida (AP) — Video from a Florida jail shows a barefoot and handcuffed Tiger Woods performing two breath tests after being arrested on suspicion of driving under the influence.

Woods mumbles responses to an officer's questions, describing his hair as "mostly brown and fading."

Woods asks what the case is about and repeatedly needs instructions to blow into the breath machine. The officer and breath-test technician laugh when Woods says he "can't unlock my two bracelets."

While seated and handcuffed, Wood agrees to a urine test but asks, "How am I going to hold it?"

The breath tests registered a 0.0 blood-alcohol level. Woods has blamed "an unexpected reaction to prescribed medications."