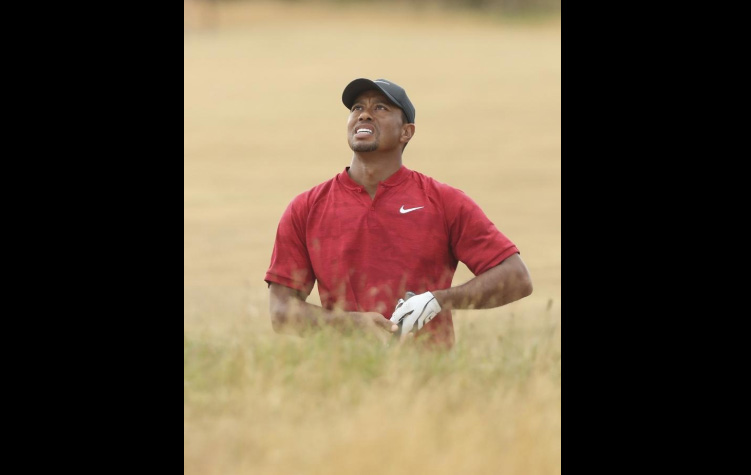 Tiger Woods Watches His Shot From The 10th Hole Bunker In The British Open At Carnoustie. He Would Call It His Best Shot Of The Year (AP Photo/Peter Morrison)

By Doug Ferguson / The Associated Press

Brooks Koepka used a 9-iron on consecutive full swings in the final round at Shinnecock Hills. One led to birdie, the other led to par. Both were crucial in making him the first back-to-back U.S. Open champion in 29 years.

Tiger Woods showed glimpses of being back on his game with a long iron and a short one. Tony Finau hit one of the luckiest shots in Ryder Cup history.

They were among the memorable shots using all 14 clubs in the bag, from driver to putter, that helped shape 2018 on the PGA TOUR.

Dustin Johnson hit the best shot he never saw. His driver on the 433-yard 12th hole at Kapalua disappeared over a steep slope and finally stopped rolling 6 inches in front of the cup. It didn’t factor in the outcome, Johnson won by eight shots, but it sparked a new round of debate on distance, even though the wind was at his back and the last 120 yards are downhill with the grain. It didn’t help that Johnson said he caught it a little thin. He was joking.

Hideki Matsuyama might have hit an even longer shot with his 3-wood, except the Barry Burn got in the way. Matsuyama’s tee shot on the 10th hole at Carnoustie in the first round of the British Open went an estimated 405 yards before it dropped over the edge and into the water. “I couldn’t believe it,” Matsuyama said. It was an example of how tough an Open can play when players have to guess how far the ball will roll on a fast links.

Justin Thomas was 259 yards from the hole on the par-5 18th in a playoff at the Honda Classic. He went with 5-wood, which he thought was enough until he started farther right than he wanted. It was getting dark, and Thomas couldn’t see. “All I was looking at was the water to see if it splashed,” he said. It didn’t. He saw a tiny white dot on the green, and the two-putt birdie on the par-5 18th gave Thomas the win.

Just about every tournament brought a moment that indicated Woods was back to being Woods. One of those moments was the opening round of the BMW Championship at rain-softened Aronimink. From 242 yards on the par-5 16th, Woods hit a 3-iron high and straight. It landed 8 feet in front of the hole and stopped 5 feet next to the pin for an eagle on his way to a 62. It was the first time he had at least a share of the lead after any round in five years.

Koepka had a one-shot lead with three holes to play in the PGA Championship when he came to the 248-yard 16th hole at Bellerive. He hit a laser of a 4-iron to 6 feet for a birdie that sent him to his second major of the year. “That will probably go down as one of the best shots I’ve ever hit under pressure,” he said.

“We’re not here to lay up. It’s a major. You’re going to have to take some chances at some point during the week,” Marc Leishman said. And that’s what he did on the par-5 15th hole at Augusta National in the second round at the Masters. His tee shot was too far left, leaving trees between him and the flag. Leishman hooded his 5-iron and hit a 40-yard hook that just caught the front of the green, bounced up and rolled out to 6 feet for eagle.

Francesco Molinari started the back nine of his flawless finish in the Quicken Loans National with a 50-foot eagle putt. But his best shot was on the next hole, where his 6-iron to a back right pin settled just under 2 feet for birdie. The 11th hole at TPC Potomac at Avenel Farm yielded only one other birdie in the final round. Molinari shot 62 and won by eight.

Jason Day had a one-shot lead at the Wells Fargo Championship when he came to the par-3 17th hole, with a back pin on a peninsula green that was running hard and fast. On one of the most daunting holes at Quail Hollow, his 7-iron from 230 yards hit the pin and settled 3 feet away for birdie that sent him to his second victory of the year.

Finau had a Ryder Cup debut to remember, especially on the par-3 16th hole. Finau and Koepka were 1 down when Finau’s 8-iron was headed for the water. Instead, it struck a 12-inch wide board framing the green, soared into the air and plopped down 3 feet away to square the match, which the Americans won on the 18th. It was as lucky as any shot in the Ryder Cup. And it still didn’t help the Americans end 25 years of losing on European soil.

Koepka is most proud of his 9-iron into the par-3 17th for par because it was such a hard green to hold. But it was his 9-iron to a back pin on the par-5 16th hole at Shinnecock that settled 3 feet away. The birdie gave him a two-shot lead in the U.S. Open with two holes to play.

Woods thought it was the moment that would lead to victory in the British Open. He was in a bunker on the 10th fairway and looked almost certain to lay up short of the burn. Instead, Woods generated enormous speed with a pitching wedge for a shot that narrowly cleared the vetted face of the bunker and came up a few feet short of the green. It would have been the signature moment, except that he made double bogey two holes later and slid from contention. He still called it his best of the year.

Justin Thomas knew he needed a birdie on the 18th hole of the Mexico Championship to have even a remote chance. He did one better. His gap wedge from 119 yards spun back into the cup for an eagle and a 64, and it was good enough to get into a playoff. He wound up losing to Phil Mickelson on the first extra hole.

Molinari played bogey-free in the final round at Carnoustie while all of his challengers made mistakes over the final few holes of the British Open. He wasn’t in the last group. The Open wasn’t over. After a clutch drive that avoided a bunker on the 18th, the Italian hit lob wedge to 5 feet and holed the birdie putt, effectively clinching his first major championship.

The most memorable shot with the putter didn’t go in the hole. Phil Mickelson only wanted to make sure it didn’t go off the front of the 13th green on Saturday at the U.S. Open. So he trotted over and slapped at the ball as it was still moving, an egregious rules violation. Mickelson says he knew the penalty (two shots) and liked that better than having to play from off the green. He also knew his U.S. Open was over. He made a 10 and shot 81, matching his worst score in the only major he hasn’t won.