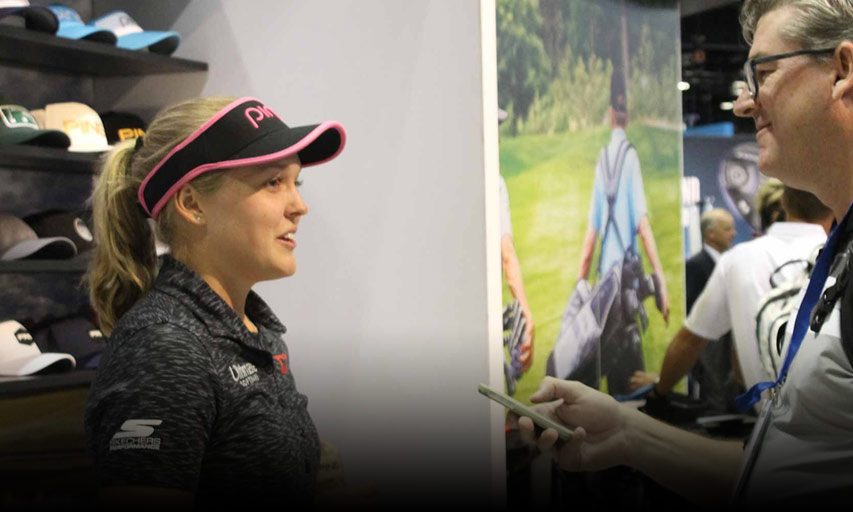 On Wednesday, Brooke Henderson was found at the PGA Merchandise Show in Orlando, Florida

This after coming down with the flu last Friday evening following her second round at the LPGA season-opening Diamond Resorts Tournament of Champions where she was the 36 hole leader.

Feeling significantly better she was found greeting her fans and media at the Orange County Convention Center.

Brooke is proudly sponsored by club manufacturer PING and Sketchers, who provide her with apparel and footwear throughout the season.

She made lengthy stops at both booths interacting with everyone and taking many pictures.

Henderson is looking to switch to some new equipment including the PING Glide 2.0 wedges and the i210 irons.

“Normally I don’t like to do it right away, but these ones felt really good,” Henderson told LPGA.com.

“I thought I’d try them, it really worked out really well and I started the tournament really strong.”

Brooke continues to be one of the most technical players on the tour which includes her unique swing from playing hockey during her youth.

She talked about her apparel and shoes including, "These shoes were designed specifically for me, which is really cool,” Henderson said her new shoes, which combined her favorite aspects of each of their designs.

“They send me stuff and want my feedback, so I tell them what I think and then they redesign and make things easier for me.”

Henderson's next tournament will be in Australia to play in the ISPS Handa Vic Open.