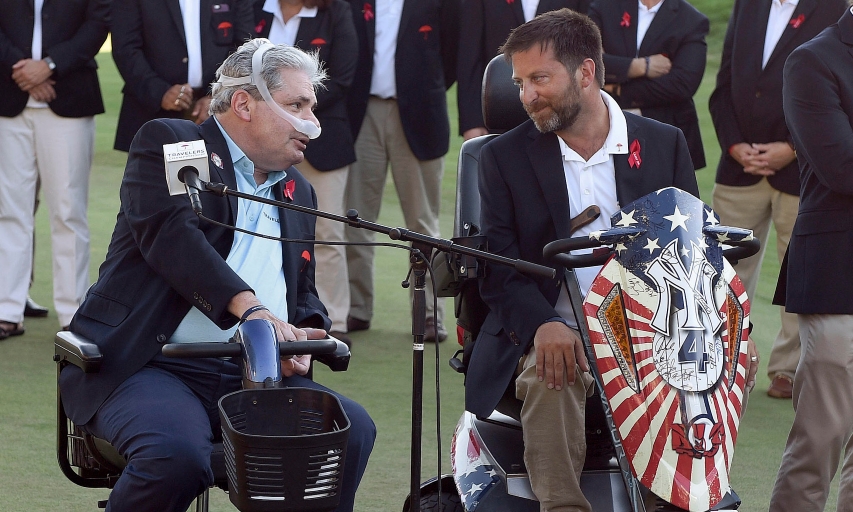 For the second year, a spot near the final hole is designed to accommodate patients from New Britain's Hospital for Special Care who have amyotrophic lateral sclerosis or ALS.

More than 100 ALS patients will watch some of the world's best golfers from air-conditioned viewing spots with wide spaces for easy navigation. They'll get rides to the tent from the parking lot and be served easy-to-eat meals.

The late Jay Fishman had the motor neuron disease commonly known as Lou Gehrig's disease. The former Travelers chief executive helped save the event in 2007, when the company became its title sponsor.

PGA Tour spokeswoman Laura Neal said the setup may be copied at other tour stops.

"It's proven that it works," she said. "Anything that draws fans in and recognizes and celebrates the way that golf and charities can come together to provide access is something that if it can be replicated, we're looking at that."

The tournament donates all proceeds to charity. It made the hospital the primary beneficiary last year and brought patients to the event.

Tournament director Nathan Grube said his team asked the hospital what they needed to build a facility accessible to those with ALS.

"Where do you want the ramps? How big? What do you want the inside of the facility to look like?" he said. "We built it out specifically for them, exactly how they wanted it to be."

A woman had an issue using the portable toilet because of the placement of the assist bar, so a Travelers executive was called to the scene and it was retrofitted in less than an hour.

Grube said the tournament plans to make the tent a permanent fixture on corporate row. There's quick access to medical care, if necessary.

Kenneth Shiotani, a lawyer with the National Disability Rights Network, says sports venues, including golf courses, require public accommodations under the Americans with Disabilities Act of 1990.

That means new courses must be accessible for those with disabilities, and course managers of older venues need to make changes.

"They are gradually reaching out to do more," Shiotani said. "It shouldn't need to have someone like (Fishman) to make that happen. But, the fact is, it sometimes requires someone in power who has a disability to open some eyes and move beyond what a company or an event might otherwise do."

The TPC River Highlands club, like other tour stops, has standard ramps and other ADA accommodations around the course this week.

For now, the tent is only available to ALS patients. Shiotani said it shows what can be done for all fans with disabilities.

Neal said the disability law can involve special parking, ramps, seating and the use of carts to get from hole to hole.

That's good news for fans such as 41-year old Brian Savo of East Haven, who was diagnosed with ALS in 2009. He served as an honorary co-chair of the tournament last year.

Savo said it's hard for people to understand what it means to him and others to get out of their homes and interact with people.

"When you have ALS, every day is a battle," he said. "To get out and enjoy yourself, it's very difficult. To see the faces of the ALS patients up on the 18th hole getting to see everything going on, it's priceless."