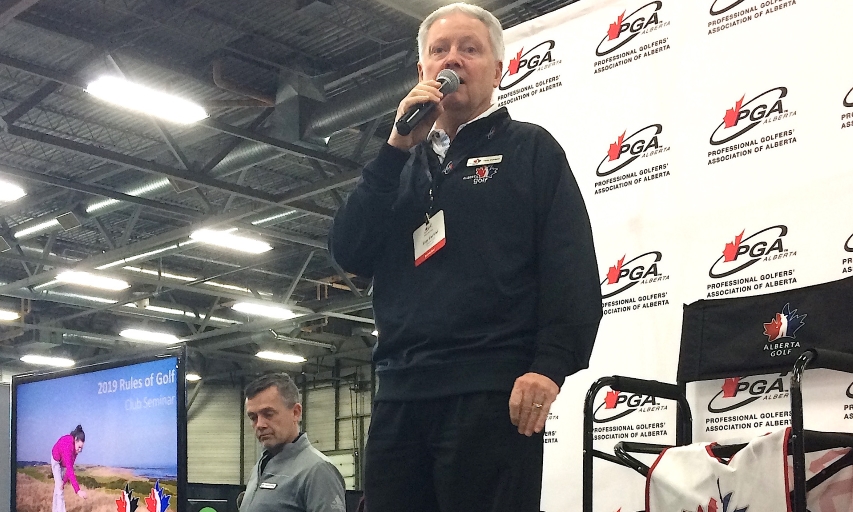 EDMONTON, Alberta — While the newly revised rules of golf are supposed to make the letter of the law easier to follow, there are times when confusion can reign supreme on the links. Due to that, and the interesting twists to the regulations, Alberta Golf took the time at both the Edmonton and Calgary Consumer Golf Shows to help golfers better understand the changes.

While there have been several changes to the former rule book, there are still instances where confusion can hold the upper hand, especially in cases of how to properly drop a ball after a penalty is incurred; the area where a player can take such a drop; and what is and what isn’t a penalty under the newest guidelines.

Speaking to the implementation of these new directives that came into effect on Jan. 1, 2019, Tom Zariski from Alberta Golf, said he felt the average golfer would basically figure things out as they went.

“That’s pretty much the consensus,” he said. “How did people learn the rules of golf in the past? Well, they learned from watching television, from their buddies, from the pro at their club. That’s what we’re predicting. People are going to learn them like they always have.

“We are stressing, however, that there is some really, really good information out there,” through the Golf Alberta, Golf Canada, R&A and the USGA websites. Or, for a small sum, people can purchase the Players Handbook, which breaks down the most important rules and comes this time around with pictures to illustrate various points. “Self-study is very easy,” commented Zariski.

What needs to be learned about the newest rulings isn’t rocket science, for the most part. There have been many changes, some a little confusing, some not so much. Zariski noted there has been a bit of blowback from rules officials, who have needed to brush up on the new requirements.

“Yes and no. The way we’re looking at it, for the general recreational golfer who just wants to go out and play, there aren’t that many significant changes,” but there are some quirks.

One of those is of course, the feared double-hit. That no longer exists, so if you do whack your ball twice with one swing of the stick, it’s simply one stroke. Another is when you tee off. If your ball strikes something - say a tee block or a tree - and bounces back into the teeing area, you can re-tee for your second shot. Or, if a ball rolls into a bunker and you are the world’s worst at making that shot you can now simply lift your ball and place it outside the bunker - with a 2-stroke penalty, of course.

A big part of these changes is to make the game somewhat more user-friendly as well as speed up the pace of play. Zariski agrees that could well happen, especially if everyone in a group leaves the flagstick in the hole when putting, which can now be done.

“I think it should speed things up. The rule of not having to play out of a sand trap (is a big one). Now, you don’t have to. I know lots of people who before just threw the ball out (from frustration and far too many attempts). Now, they can just take it out. That makes it easier, friendlier.”

One of the people taking in the talk at the Edmonton show, Jerome Thorne, said he’s a casual player who finds the new rule tweaks interesting. “I was just curious of all the new rules and when you play once or twice a week you’ll probably see four or five different things where you won’t know what the answer would be. This is a chance to listen and learn,” he commented as to his hanging around for the hour-long discussion.

Interestingly enough, Thorne said, “I usually play by the rules … if I know the rules.”

Of the changes that were discussed during the day, he pointed to one that caught everyone on hand by surprise.

“The embedded ball in the bunker rule. That the lip isn’t considered part of the bunker. I’ve seen it happen a few times and you’re always in a bind, right? It’s nice to see you get relief from that one, that’s for sure,” as the new rulings say a player in such a position is allowed to remove the ball and drop it outside the bunker with no penalty.

As for the strangest change he heard during the day, the re-teeing of a shot was certainly one of them. “Yeah, that one. We always played that if that happened, now you’re on your second shot and had to play it as it lay. For the most part, when you’re playing with friends, you do that (tee it up again) anyway. The other one is out-of-bounds (a one-club length drop from spot where the ball left the playing field). relief”

A new Local Rule is now available as of January 2019, permitting committees to allow golfers the option to drop the ball in the vicinity of where the ball is lost or out of bounds (including the nearest fairway area), under a two-stroke penalty.

In closing, Thorne’s sentiments about these changes were similar to those of the Alberta Golf rep, in speeding up the pace of play. “I think the changes that they’ve made will make it a lot easier and result in quicker play, for sure.”

As for his feelings, Zariski said, “The way we’re looking at this is the higher the level of competition, the more these new rules are going to come into play.”

However, he also feels they will benefit everyone who walks onto a fairway this year and in future years. “I think they’re supposed to be friendlier, supposed to be easier, and I think most people will find it that way,” even if it does take them a while to find their way through the changes made to the Rules of Golf this year.