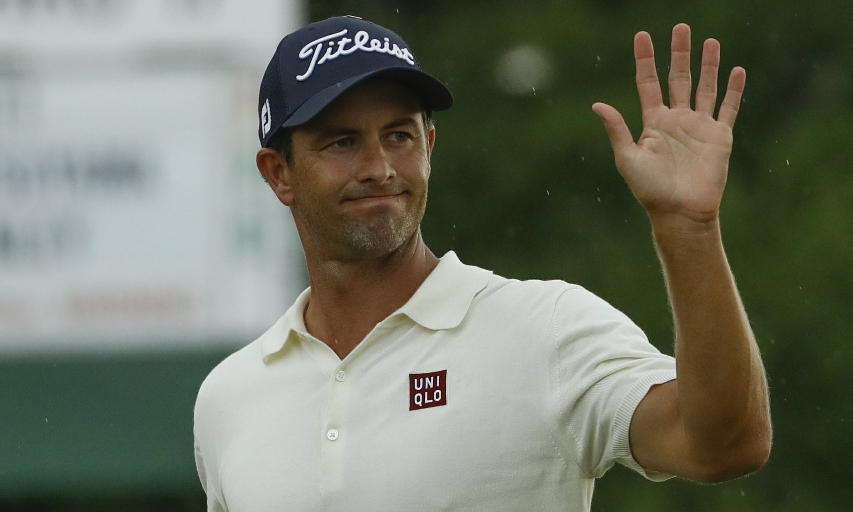 AUGUSTA, Georgia — Adam Scott had a choice to make, and some time to do it.

Then he came out of a storm delay to hit the shot of his day. And just like that, Scott is in the mix on a star-studded leaderboard as he tries to end a long victory drought and win his second Masters title.

Scott waited out a 29-minute delay to hit a risky 2-iron to the par-5 15th green Friday, a shot that settled near the pin for an eagle that briefly moved him into the lead by himself at Augusta National.

“When you’re swinging well you have to go for it,” Scott said. “I don’t know if it was the smartest decision, but it certainly paid off.”

Scott had just hit his drive when the announcement came to suspend play. He walked to his ball and marked it, certain that a 4-iron would be enough to clear the water when he came back.

But the wind picked up and the shot became more difficult when he returned. He hit the 2-iron instead, and the gamble paid off when the ball ended up 5 feet from the pin.

“It was kind of a perfect number for a 2-iron, if there is such a thing, on 15 at Augusta, and hit a great shot,” Scott said. “These are the kind of momentum things that you have to sometimes make happen to put yourself in a good position.”

Scott’s position couldn’t be much better, tied with four other players at 7-under 137 after a second-round 68. Four others, including Tiger Woods and Dustin Johnson, are a shot back going into what should be an eventful weekend on a golf course that so far has been there for the taking.

The Australian who often struggles with a balky putter played almost flawlessly, with two birdies and an eagle on the back nine. His only mistake came on the 16th hole, where his bogey dropped him out of sole possession of the lead.

His ball striking was solid all day, but Scott was left wanting a little more from his putter after taking 30 strokes on greens that are rolling slower than usual.

“Hopefully the putter can warm up a little bit,” Scott said. “It was pretty good for two days, but you know, a hot putter will go a long way on the weekend.”

Scott’s performance wasn’t entirely unexpected. He finished second in San Diego this year, seventh in Los Angeles, and just outside the top 10 at The Players Championship.

That was enough to boost his world ranking to 29th, though Scott hasn’t won since he did it twice in 2016.

“All parts of my game I’m very confident in at the moment, and you know, when I am hitting it well, that’s where I play my best golf,” Scott said. “So that helps me stay calm out there, and patient, and all the things that you’re meant to be doing, I guess, when you’re playing major championships.”

Scott’s 69-68 marked the first time he’s broken 70 in his first two rounds at the Masters. He said it was a byproduct of him tailoring his game for Augusta National and not playing since The Players.

“It gave me time to really work on my golf swing, the couple little bits that I wanted to, to lift my ball striking up,” he said. “It was nearly there at The Players, but I felt like I could use that time wisely to do that.”

Scott, who is paired with Brooks Koepka in the penultimate grouping Saturday, said he can’t wait to test himself against a leaderboard loaded with top players.

“It’s really going to be a survival of the fittest out there,” he said. “It is really an incredible leaderboard.”