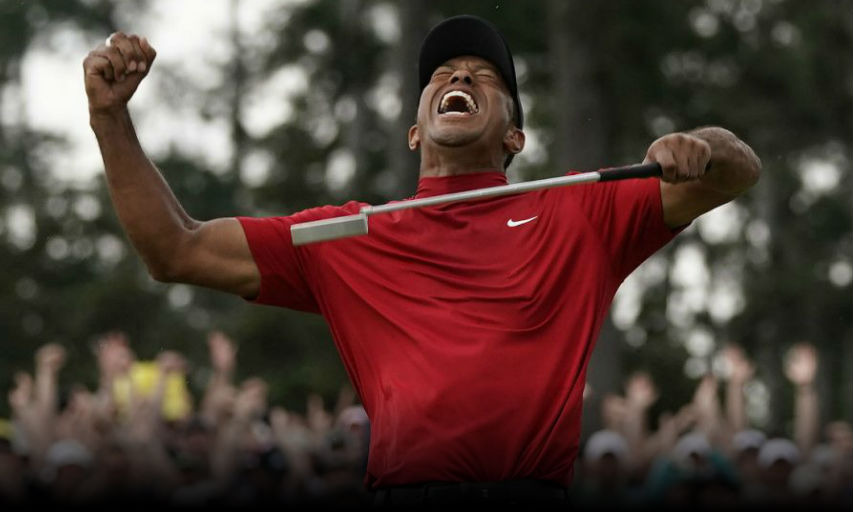 Tiger Woods rallied to win the Masters for the fifth time, a comeback that goes well beyond the two-shot deficit he erased before a delirious audience that watched memories turn into reality at Augusta National.

Woods had gone nearly 11 years since he won his last major, 14 years since that green jacket was slipped over his Sunday red shirt. He made it worth the wait, closing with a 2-under 70 for a one-shot victory and setting off a scene of raw emotion.

He scooped up 10-year-old Charlie, born a year after Woods won his 14th major at Torrey Pines in the 2008 U.S Open. He hugged his mother and then 11-year-old daughter Sam, and everyone else in his camp that stood by him through a public divorce, an embarrassing DUI arrest from a concoction of painkillers and four back surgeries, the most recent one just two years ago to fuse his lower spine.

Woods won his 15th major, three short of the standard set by Jack Nicklaus. It was his 81st victory on the PGA Tour, one title away from the career record held by Sam Snead.

It was the first time Woods won a major when trailing going into the final round, and he needed some help from Francesco Molinari, the 54-hole leader who still was up two shots heading into the heart of Amen Corner.

Molinari’s tee shot on the par-3 12th never had a chance, hitting the bank and tumbling into Rae’s Creek for double bogey. Until then, Molinari had never trailed in a round that began early in threesomes to finish ahead of storms.

With the final group still in the 15th fairway, there was a five-way tie for the lead. And that’s when Woods seized control, again with plenty of help. Molinari’s third shot clipped a tree and plopped straight down in the water for another double bogey. Woods hit onto the green, setting up a two-putt birdie for his first lead of the final round. The knockout punch was a tee shot into the 16th that rode the slope just by the cup and settled 2 feet away for birdie and a two-shot lead with two holes to play.

Woods finished at 13-under 275 and became, at 43, the oldest Masters champion since Nicklaus won his sixth green jacket at 46 in 1986.