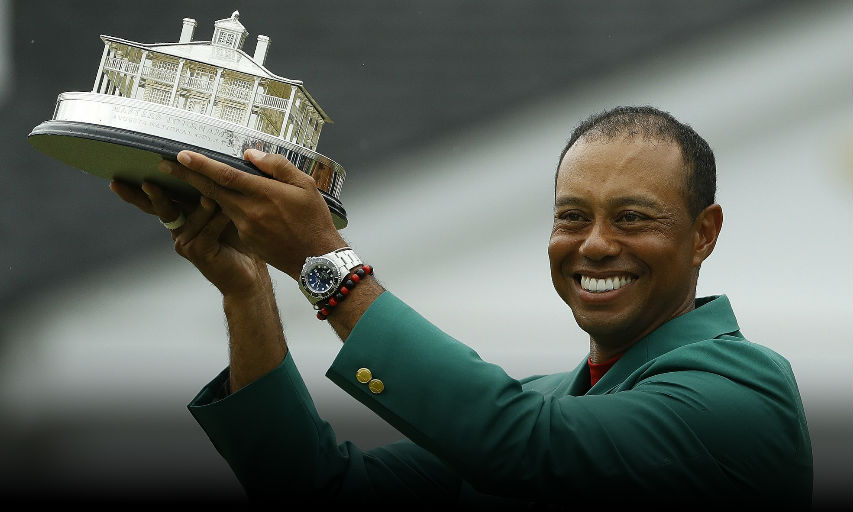 The severe weather that threatened to create havoc on the course never materialized, but the chaos came anyway. The leaderboard was a volatile place for about an hour, with players rising and falling every few minutes.

Francesco Molinari was the leader at one point before hitting into the water at No. 12. Then it was Xander Schauffele and even Patrick Cantlay for a brief moment. Dustin Johnson was in the hunt for a while. So was Brooks Koepka. Jason Day came out of nowhere to get back into contention.

The dizzying changes were nearly impossible to follow — even for players competing on the course. Roars from the crowd were coming from every corner of August National. The lead was there for the taking.

“It changed hands about, what, five times?” Koepka said. “Everybody was kind of going up and then down, up and down again.”

In the end, it was Woods celebrating on the 18th green after capturing his fifth Masters title. Koepka, Schauffele and Johnson were a shot behind. Four others, including the third-round leader Molinari, were two shots back.

“There were so many different scenarios that could have transpired on that back nine,” Woods said. “There were so many guys that had a chance to win. Leaderboard was absolutely packed and everyone was playing well. You couldn’t have had more drama than we all had out there, and now I know why I’m balding.

“This stuff is hard.”

Because of the threat of thunderstorms, tee times were pushed up several hours for the final round. Players were in groups of three instead of the usual pairs and the leaders teed off at 9:20 a.m. so the tournament could end by mid-afternoon.

PGA Tour Commissioner Jay Monahan said the final round worked out better than anyone could have predicted.

As Woods walked off the course, he exchanged hearty hugs with previous Masters winners as fans screamed and chanted his name.

“Look at everybody who wants to be here and lay eyes on this,” Monahan said. “It’s going to be interesting how people describe this in the context of great moments in sports.”

Some players said on Saturday they were pleased about the early start because it didn’t allow much time to let the pressure build. And most players chasing the leaders seemed to play relaxed.

There were 11 players who finished within three shots of the lead. All of them finished the tournament with a score of 10-under or better, which is the most in Masters history.

Even some of the players allowed themselves some awe.

“It was really cool coming down the stretch, all the historic holes, Amen Corner, 15, 16, Tiger making the roars,” Schauffele said.

Most of the players who lost still left feeling pretty good about themselves. Woods was the big winner, but in many ways, so was the sport.

“With what we just witnessed with Tiger coming off 18, it was a throwback, seeing him in red in the mock turtleneck,” the 25-year-old Schauffele said. “It’s what I saw as a kid, and it was just really cool to know him a little bit now and congratulate him coming off 18.”