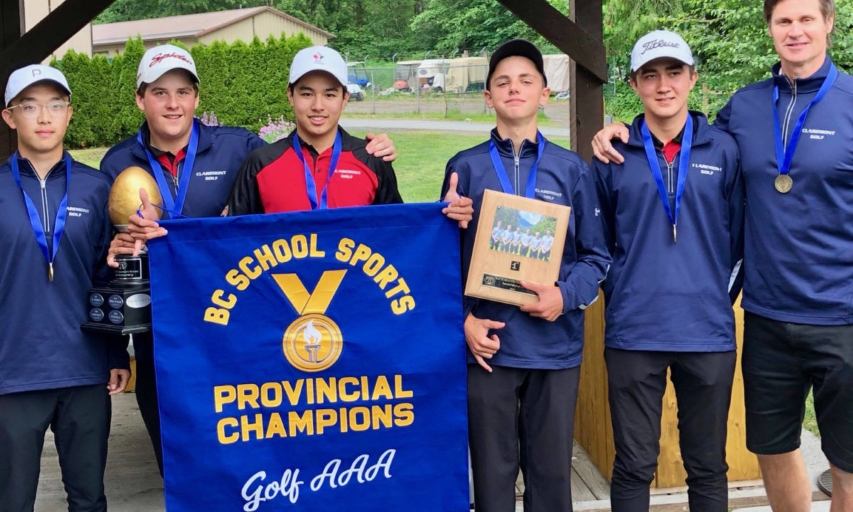 It was a banner day at Claremont Secondary and the Victoria school hadn’t had one of those in a while.

“This is the first team (championship) banner we have had in nine years for the school, so it is exciting,” coach Shon Ryan said after his Claremont team won the B.C. High School AAA Golf Championshipat Squamish Valley Golf & Country Club.

The five-man Spartans team of Willie Bishop, Michael Wu, Chase Basanta, Richard Zhang and Connor Watson put together a strong final round in the 36-hole event to beat Vancouver College by eight shots.

Claremont had trailed Vancouver College and St. George’s by two shots after the opening round. “After the first day the guys were pretty choked,” Ryan said. “The wind was a huge factor but it was the same for everybody. But our guys shot poorly that first day.”

They bounced back nicely with a team score of one-over par 289 -- the top four scores counted each day for each team -- in the final round and finished with a winning score of 595. Vancouver College was second at 603, while St. George’s placed third at 606. The defending champions from Walnut Grove in Langley (613) and South Delta (619) rounded out the top five.

Ryan and his team headed to Squamish figuring they would be in the hunt for their school’s first provincial golf title. The team had finished second earlier this spring to Vancouver College at the annual Delta Police high school tourney, which always attracts many of the top schools.

“We won every tournament we went in after that so the guys were pretty pumped,” Ryan said. “We knew that St. George’s and Vancouver College would kind of be the teams to beat.”

The win came after a number of close calls for Claremont the past few years. “We missed one year when it looked like it was going to be our year and we lost by two and finished second,” Ryan said. “We have been third, we have had fourth about three times. We have been in the hunt several times, so this is pretty sweet for our school.”

Bishop, a Grade 9 student, led the way for the Spartans. He fired two rounds of even-par 72 and finished third in the individual competition. Ilirian Zalli of David Thompson Secondary, the reigning B.C. Junior Boys champion, won the individual title with a five-under par total of 139. Lauren Kim of Earl Marriott in Surrey was second at 141.

The Provincial A tourney was held at Okanagan Golf Club’s Quail Course in Kelowna, where Aberdeen Hall Preparatory School of Kelowna won the championship. Osoyoos Secondary was second and St. John’s School of Vancouver finished third.

Aberdeen Hall won with a young team that was comprised of two Grade 8 students, two Grade 9 students and one from Grade 11. They were led by individual winner Cooper Humphreys, a Grade 8 student who shot rounds of 72 and 74 in blustery conditions at Okanagan Golf Club.

Other members of the winning team from Aberdeen Hill included Kristian Isa, brothers Tyson and Colton Jugnauth and Cameron Bibby-Fox. Aberdeen Hall won by 33 shots to successfully defend the title they won last year with a much older squad.

“I highly doubt there has been a golf team collectively with two Grade 8s, two Grade 9s and a Grade 11 to win at any level, Single A, Double A or Triple A,” said Aberdeen coach Michael Hooper.